“I wanted people to forget they were reading a memoir, and instead feel themselves experiencing my life with me.

It was important to me that my writing was accessible. It’s just me on those pages. I really feel that I’m just sort of the every woman. I’ve had no formal training in writing. In fact, I moved around so much growing up that I barely graduated from high school. I’ve just recently been studying memoir writing under Kerry Cohen, who wrote, Loose Girl: a memoir of promiscuity.

With my mother being an alcoholic, I would go inside my head a lot and make up stories. It helped me to not feel so isolated. I’d start thinking about a scenario as I fell asleep, and then when I woke up, I’d just continue the story in my head where I left off.

I was always watching my mother for signs of what mood she was in, so I became a very quiet child. You develop a good ear for dialog when you’re always monitoring what’s going on around you. You also get really good at hearing not only what’s been said, but also the undertones.

A lot of times writing for me feels like I’m watching a movie, so I just sit back and listen.

In fact, dialog came so naturally for me and was so much fun, that at first I thought I would want to write a play. But I had no idea how to go about it. So I went to the thrift store and found some stuff. I ended up writing a play and even got it produced. And that was so helpful for me because I’ve always been very open to getting feedback. When people gave me criticism, I didn’t argue. Just took it all in. And so that was my college.

The hardest thing for me about writing this memoir was that the feelings I have now for the man I fell in love with is now the opposite of how I felt when I first met him. And so I had to go back and try to remember what it was like to be in love with him. I really had to muscle through it; but as I did, I started to remember that there were some good times. I started to fall in love with him again. I needed to go there to make the writing believable. But then it becomes a little bit of a mind fuck that I had to put myself through. He is a very good-looking guy; but I had to stop and disengage from that. I couldn’t allow myself to fantasize about what could have been.

I’d like to think I would make wiser choices now, or at least not the same mistakes. My eyes are a little bit more open. I am trying to be a little more self-aware. But if of someone were to come along now…truthfully, I probably still would fall for him. But the one thing about experience is that once you know something, you cannot un-know it.

I don’t have a fear that I’ll slip back, because I’m here now and I’ve already come back out of it. Sometimes when I’m sitting at the computer, my mind does go back, but it’s o.k.

My biggest fear about writing this memoir was if it came off sounding like I feel sorry for myself. That’s not interesting to me. I didn’t want to have it come across that I see myself as a victim. Yes, there were plenty of times I was angry at God, but I’m not there now.

I think for anyone, writing is hugely healing and everybody should do it–especially when going through a hard time. But that’s journaling; that’s not necessarily memoir writing. For me, memoir writing has to be able to answer the question, ‘So what have you learned from this?’ If you have no clarity, wait until you have gained more perspective. And then go back and include what you have learned.

Same with blogging. It’s a great way to get your feelings out as you’re experiencing them, and I probably would have benefited from doing that. But it would have looked very different from this memoir.

What I used t

o help me get through things was humor. It had always been such a huge part of my family’s life when we were growing up, because we didn’t know how to communicate with each other in a real, direct way. So that’s what we did instead. Even when things were at their darkest, there was always a part of me that saw the humor in the situation; and I know my mom saw the humor of what was going on as she was at the end of her life. ‘Cuz you know, some of the things we have to go through when someone close to us is dying is pretty bizarre. You’re not prepared for it. But if I would have written about it at that time, I don’t know if I would have been removed enough to talk about it like that.

Using dark humor wasn’t a conscious choice. I didn’t sit down and say, ‘Ok, I’m going to make this funny.’ I just couldn’t not see the humor in the situation; and there were some parts where I actually put too much humor in the story and had to take it out. But that’s just where I just kind of naturally go. Like stand-up humor, and how it makes it so the audience can embrace the absurdities in life.

There were many times where my life could have been very dark; but if you take the humor out, you miss the joy. Another thing about growing up in an alcoholic home is that desire to always want to fix things. ‘What can I do to make it better?’ So even when I was running away from an abusive relationship, it was important to me that I still took the time to make my bed before I left.

In fact, a lot of the choices that I made were coming from this need to fix the situation. But the more I tried to fix things, the more it fell apart.

I kept thinking to myself, ‘I will find a way to get out of this; but first I need to have all of the pieces in place. First I need to fix everything. And everyone. Once they’re all fixed, then I can take care of myself. That’s what was behind the title, Will Love for Crumbs. Putting myself last. And in the end that strategy didn’t work anyway. The more I tried to fix things, the worst it all got.

At the same time, my mom was still my mom. And I was still her child. I think that when women have children, a good bit of that stepping into the role of caretaker just naturally transfers now that they are a mom. They know what that caretaker role feels like. I don’t have children; so I only knew how to be the kid and how to go to the person who was the problem-solver in our family, who knew how to fix things. For her to now rely on me was frightening actually. It was heartbreaking to see her so weak. I didn’t want to see her weak. I was o.k. with her being strong and me being weak. I was used to that. But being suddenly forced to switch roles with my mother made me realize that I was much stronger than I thought I was. Through no choice of mine, I was put into situations where I just had to do stuff. And when I did, it became obvious to me that I had learned a thing or two from her. And all this time I didn’t even know it. I think there comes a point in everybody’s life where it comes your time to step up and the torch is passed. 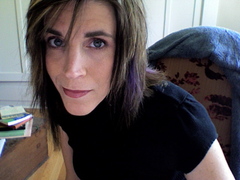 After my mom passed away, I went on a psychic journey, trying to reconnect with something outside myself because I had such a broken relationship with god and I wanted to fix that. The single prayer throughout my life was that my mother would get sober. Even as a little girl: ‘Please don’t let her get drunk again!’ But my mother never did. So I concluded, ‘Well, God doesn’t like you.’ Sure, there was a god out there who helped other people, but… I started going to a Buddhist temple, did all this spiritual stew, everything I could get my hands on, trying to get this spiritual connection.

But it wasn’t until I started writing this memoir that I finally got it what god is–that we are always creating and making choices for ourselves, getting in there and living life. And this creating and writing and singing songs and loving each other…that is god.”

To order or read reviews of Jonna Ivin’s ebook memoir, Will Love for Crumbs, visit: her Amazon Author page

Since this article first appeared in Combustus (February, 2012) Jonna has also published a novel, 8th Amendment

, and Loving for Crumbs: An Anthology of Moving On