“You use a glass mirror to see your face;
you use works of art to see your soul.”
~ George Bernard Shaw

eauty, like art, is a matter of what stirs us. That precise mix of elements that excites the imagination and whispers for us to come closer, that there is more than just surface here, but actual magic. The artist takes what he sees and delves deeper, pulling out what lies beyond the beyond: the myth.

Thomas Dodd knows how to whisper.

“The only service a friend can really render is to keep up your courage
by holding up to you a mirror in which you can see a noble image of yourself.”
~ George Bernard Shaw

Deanna Phoenix Selene: Folklore and myths figure quite prominently in your work. This piece entitled “The Huldra,” for instance, which depicts your take on the forest creature found in Scandinavian folklore: Can you tell me what draws you into these stories? If you were ever moved to do an autobiographical piece, which folktale figure would you invoke? Or are these all aspects of yourself already? 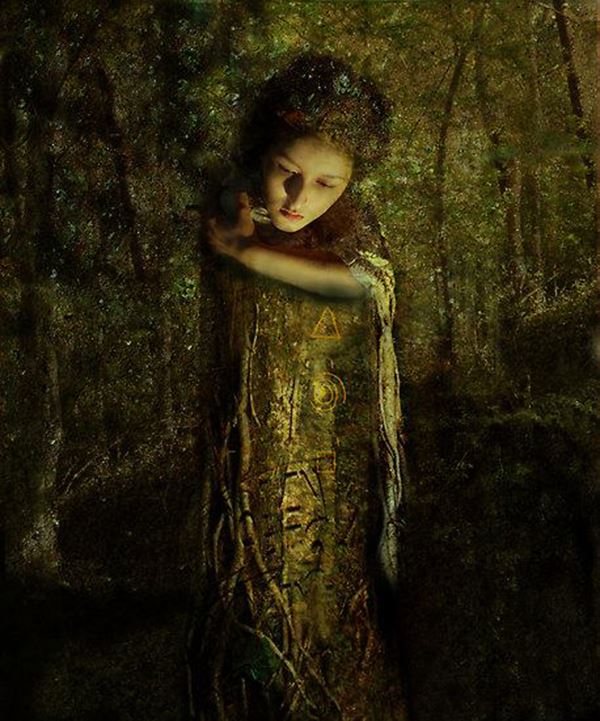 Thomas Dodd: I have always been fascinated with myths and fairy tales. I think because they elicit such a strong response from the subconscious mind and at their core they deal with archetypal forces and facets of human nature we all share. These ancient stories were how our ancestors codified human psychology through representing them as Gods, Goddesses and supernatural events. I have been told more than once that all of these images are just different facets of my own being and I have to agree with that assessment, although I am not ruling out making an appearance in my own work as a mythic creature at some point in the future. Not sure what exactly I would be, but I will let my subconscious guide me. As always.

Deanna Phoenix Selene: Yes, I am intrigued with where Thomas Dodd fits into these stories. By photographing The Feminine in others, are you able to access this part of yourself? Is this one of the gifts being an artist affords you?

Thomas Dodd: I think that my art is a way I integrate both my masculine and feminine selves. It certainly allows my anima to be portrayed. I depict masculine energy in a completely different way than my portrayals of femininity. I view the masculine side as the voyeuristic half, beholding the beauty of the feminine side.

Thomas Dodd: The one time I portrayed myself as a transformed being, it was as the crucified Christ. This was not only a link to my Catholic upbringing, but my way of showing that the Christ metaphor remains so strong in our culture because all of us have felt the death/rebirth experience many many times in our lives.

Deanna Phoenix Selene: What kind of response did you get to this piece, Thomas? Were you at all surprised?

Thomas Dodd: People seemed to really like it and wanted to see more self portraits. I was mildly surprised by that because I think the models I work with are infinitely more photogenic and interesting than I am!

Deanna Phoenix Selene: What we love is intimacy and authenticity and vulnerability. And courage. That’s is what connects us, one to the other.

Thomas Dodd: Yes, and I do infuse every fiber of my being into my work, whether it is a picture of a model or myself. 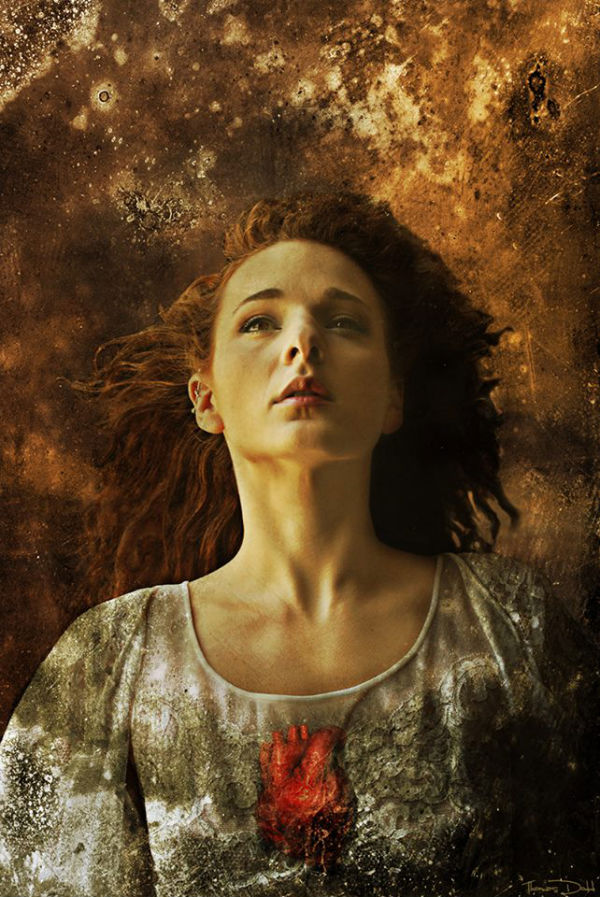 Thomas Dodd: I see what you mean though, that self-portraits are particularly “revealing” of the true essence of the person. 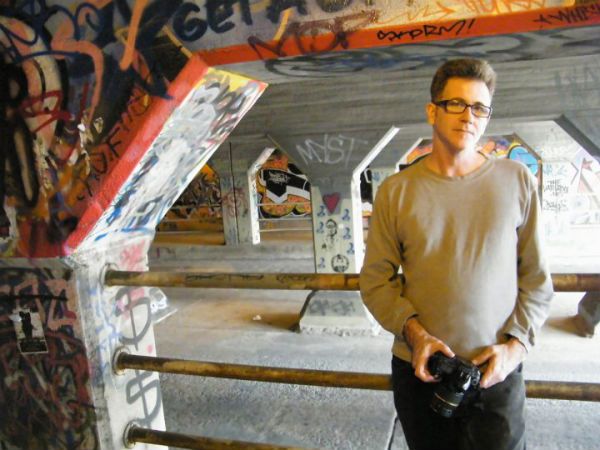 Deanna Phoenix Selene: Would you ever consider photographing a woman whose body was less than perfect?

Thomas Dodd: I am doing a series right now entitled “All Bodies Are Beautiful,” and I am depicting women of all shapes and sizes in these images. 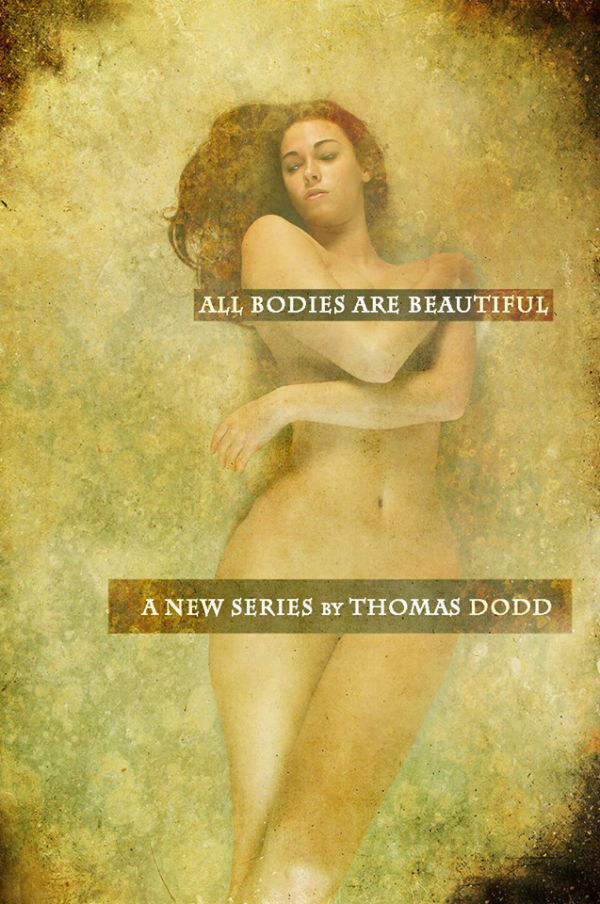 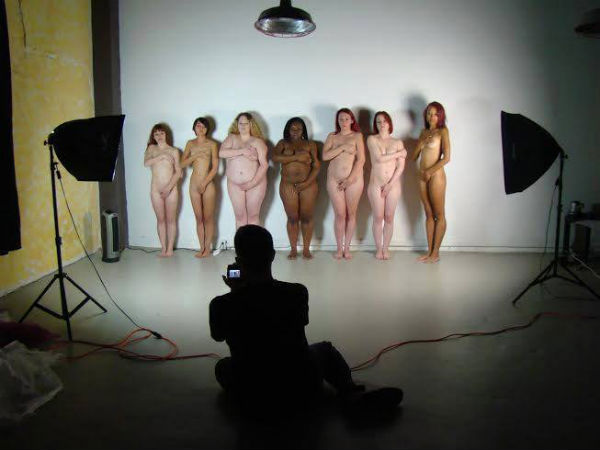 Thomas Dodd: I have already done several shoots and am working on the edits now.

Deanna Phoenix Selene: Would you consider including a breast cancer survivor?

Thomas Dodd: Yes, actually I have been talking with someone who is undergoing a mastectomy about chronicling her journey.

Deanna Phoenix Selene: A couple years back I attended an outdoor Melissa Etheridge concert and there was a woman in the audience who had undergone a bi-lateral mastectomy but had not undergone reconstruction. She was walking around topless.

Deanna Phoenix Selene: Please tell me about “The Inquisitor.” It is decidedly different from the rest of your work and elicits very strong reactions, doesn’t it? 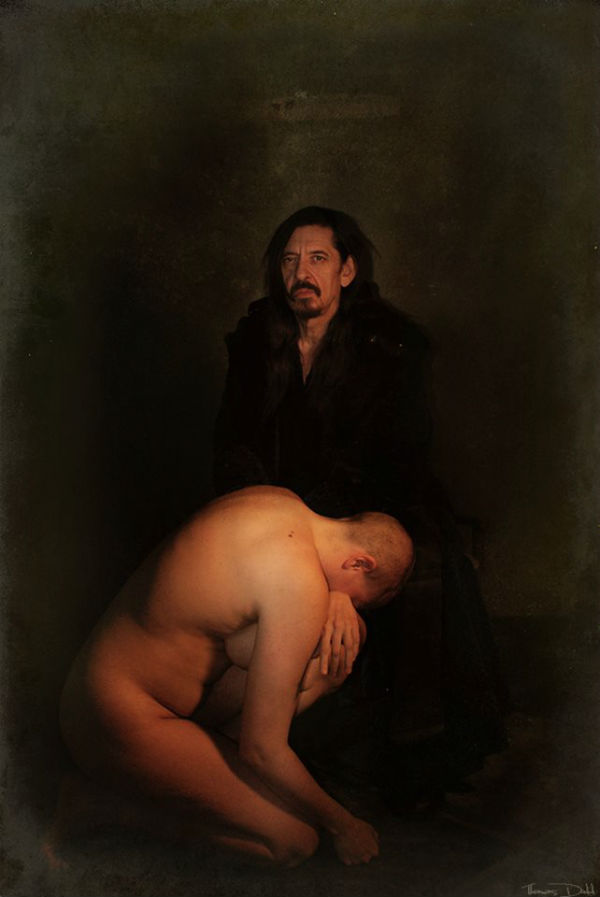 Thomas Dodd: The few times I have used males in my work, I’ve look for older and more interesting faces. “The Inquisitor” came about when the female model told me she was willing to shave her head on camera for me. I instantly thought of the Inquisition and how the Inquisitors shaved the heads of the women who were accused of being heretics, to humiliate them and make them vulnerable and truly “naked.” So that is what this is depicting. I think the male has a face that tells a story; there is a malevolence and piousness about his look. And the female prostrated in front of him also speaks volumes as well.

Deanna Phoenix Selene: Thomas, how would you like to affect changes in the art world?

Thomas Dodd: I think my role as primarily a creator in the digital realm is where I can affect change – that I can show people that art created on the computer is just as much fine art as other mediums are. 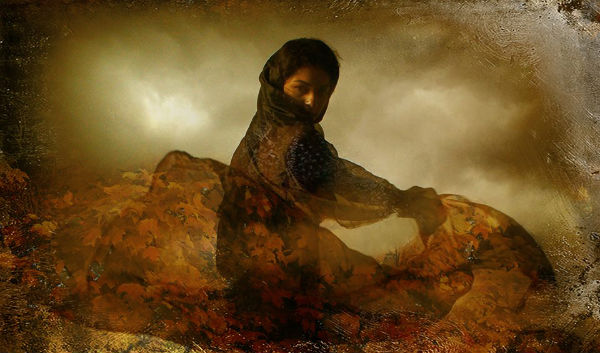 Deanna Phoenix Selene: In your video you made reference to the classical painters who have served as inspiration for you.

Thomas Dodd: Yes, I am definitely more influenced by painters than photographers. I love Rembrandt and Caravaggio for the way they rendered light and skin tones, Giuseppe Arcimboldo for his fusion of plant and human forms, the Pre-Raphaelites for their depiction of myth and feminine beauty, and perhaps the biggest influence on me is that of the Symbolists, because they perfectly united the metaphoric and the beautiful in their works. 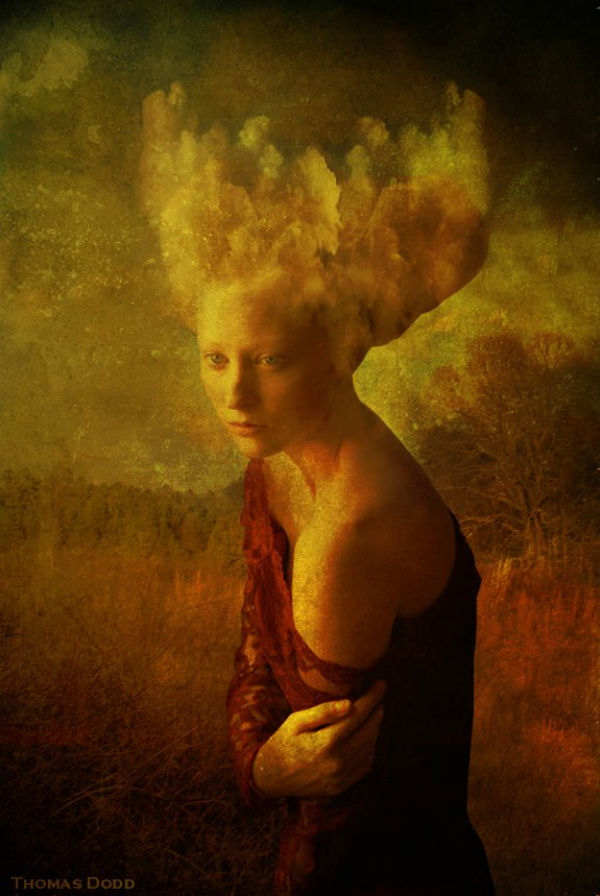 Deanna Phoenix Selene: What led you to photography, Thomas?

Thomas Dodd: I dabbled in photography in my teens, but then I discovered music and became a working musician for many years. It wasn’t until I was in my forties that I became intrigued by digital editing programs and the virtually limitless ways you could transform a picture using software. So Photoshop led me back into photography and I haven’t looked back since. 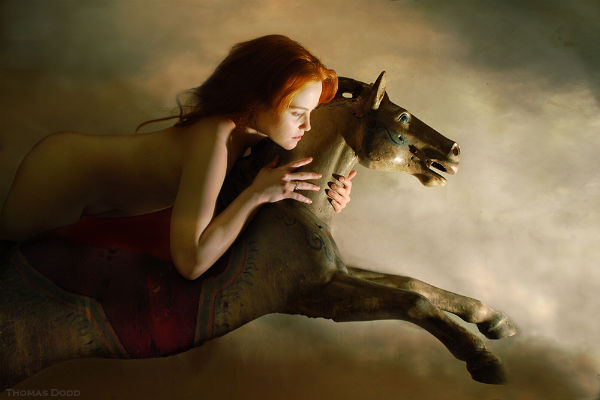 Deanna Phoenix Selene: Critics of digital editing will say that there is an intimacy lost with this technique, compared to the days such as when we were developing our negatives in darkrooms. That hands-on experience of getting the chemicals on your hands, the odor… Yet you find digital editing to be an infinitely intimate experience, yes?

Thomas Dodd: Yes, extremely intimate. Although this is all taking place on a computer, it is definitely an immersive experience for me and I meticulously craft my images, layer upon layer upon layer. I think some detractors of digital imagery perhaps think that it is a one click process or that there is some filter that is magically applied to the photos to make them look the way they do, but I can assure you that it is a craft like any other that takes years to get good at. I will say that although most of my work is done on the computer, I still think of it as an organic and natural process and I strive for the end result to show that. 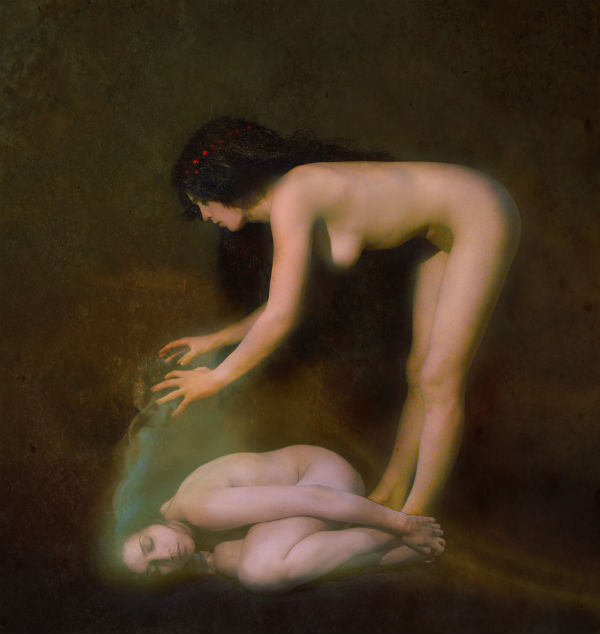 Deanna Phoenix Selene: Are your models ever surprised with where you land when the image is completed? Do they say you have uncovered parts of themselves they didn’t know existed? Or that you have created completely new characters with their forms as simply the starting point?

Thomas Dodd: Yes, some models have told me that I have revealed facets of their personality that they knew existed but hadn’t seen depicted in a tangible form yet. Others have told me that I “idealized” them in some way – made them a bit more beautiful or mythic. I always look for something deeper when I photograph them. A lot of photography is on the surface and yet so much of great art goes deeper than that and reveals the very essence of the subject being depicted. That is the kind of art that intrigues me and that is what I set my sights on achieving in my work. 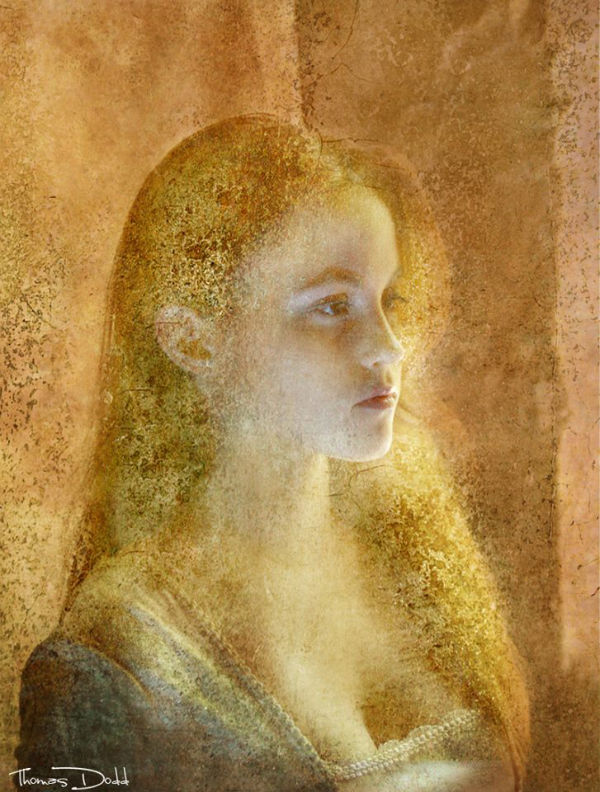 Deanna Phoenix Selene: Yes I see this, very much. I imagine you as you walk down the street and make your way through your day seeing the beauty within those you pass, yes? Am I not too far off base?

Thomas Dodd: Yes, definitely, that is the gift of doing this. I have realized that everyone has something beautiful or intriguing about them in some way. My job is to find that and enhance it.

Deanna Phoenix Selene: A beautiful gift, Thomas. How it must enrich your life. Imagine if we all adopted this practice. How much different the world would be. Instead of looking suspiciously at one another, preparing ourselves to be disappointed, expecting the worse…if instead we could be looking, ever-vigilant, for the beauty that may only be partially hidden.

Thomas Dodd: Yes, and another tragedy is the way that so many people (women in particular) feel ugly or not beautiful enough because of the utterly false and misleading way that beauty is defined in pop culture. People chase after an illusion while failing to see how beautiful they really are. 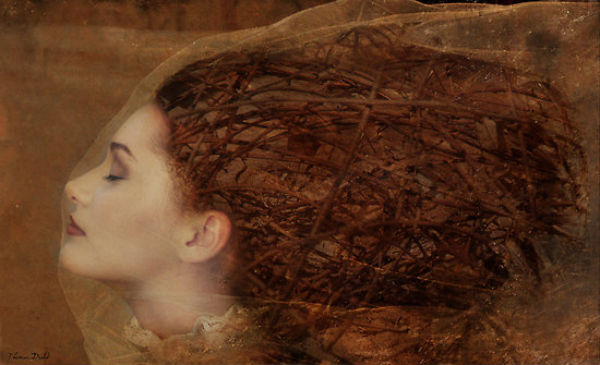 Behind the Veil | Thomas Dodd

Deanna Phoenix Selene: Did someone do this for you, as a child, perhaps? See the beauty, the potential, the magic, within you? Is this your way of expressing gratitude for being given this way of seeing?

Thomas Dodd: I had supportive parents who definitely encouraged me to be whatever I wanted to be, but I would say that I too have gone through periods of self-doubt and periods where I felt unattractive or like I was getting old and losing my looks, but photography and particularly the success I have had at it has made me feel more attractive and vital than I ever felt before at any point in my life – and I am fifty-two! Yet another gift from this journey. 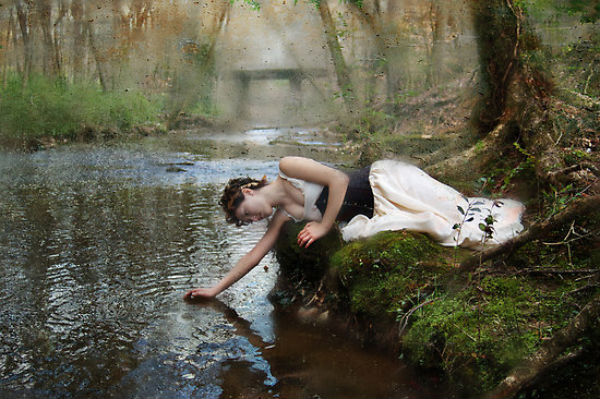 The Maiden and the River | Thomas Dodd

Deanna Phoenix Selene: This is gorgeous, Thomas. A perfect ending for our conversation today, yes?

Thomas Dodd: Thanks for a great interview! 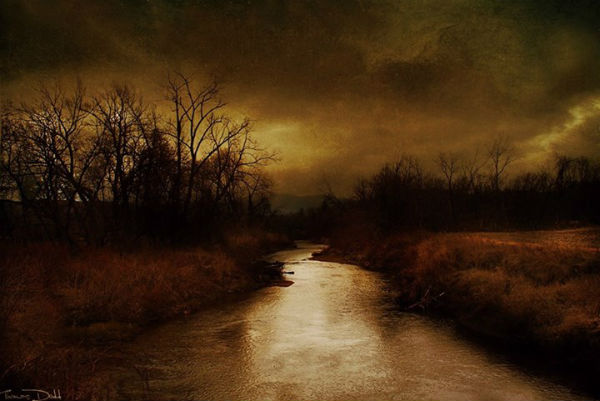