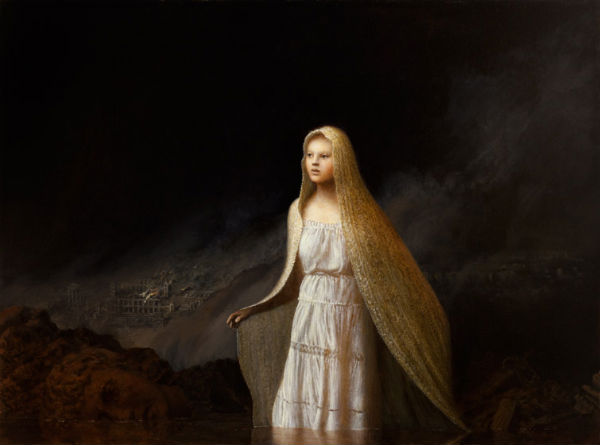 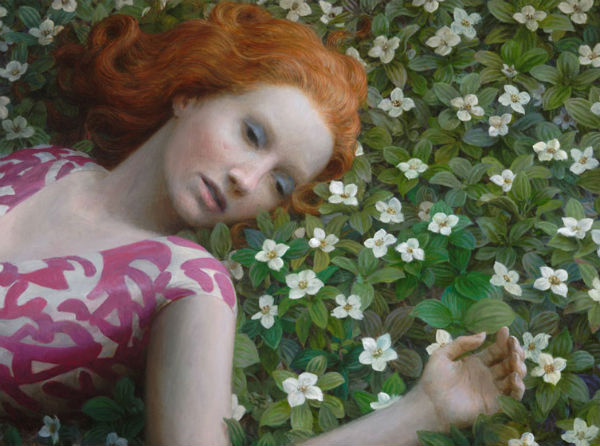 Out of dreams he weaves resemblance; out of barrenness, interiority. 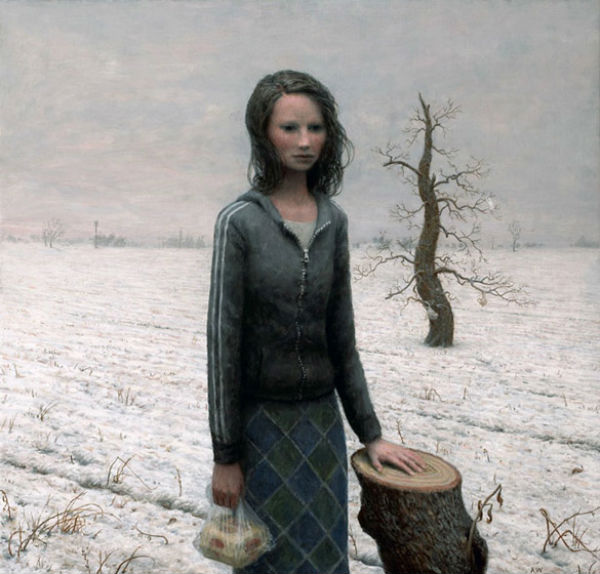 Many artists enter the dream world, but few can so inhabit it as to give us not only its semblance but the meaning of the dream. Wiesenfeld’s genius lies both in the interiority of his figures and in the exteriority of his dreamscapes. 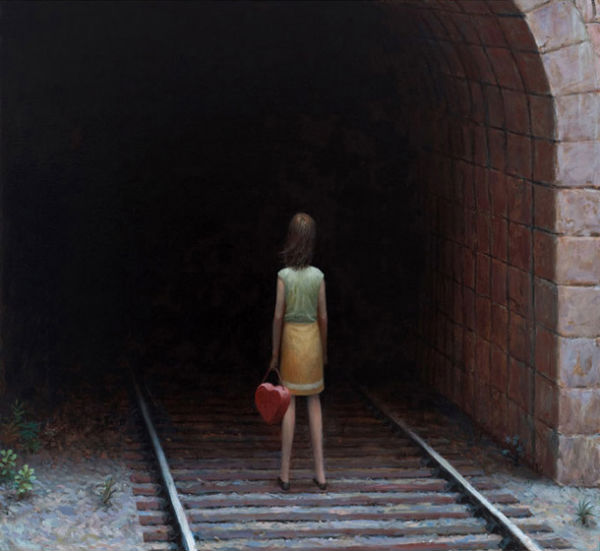 Figures possess a dream-like quality like those of Puvis de Chavannes, yet they’re as real as our own doubts and fears. And like Puvis, Wiesenfeld’s canvases overflow with silent poetry. 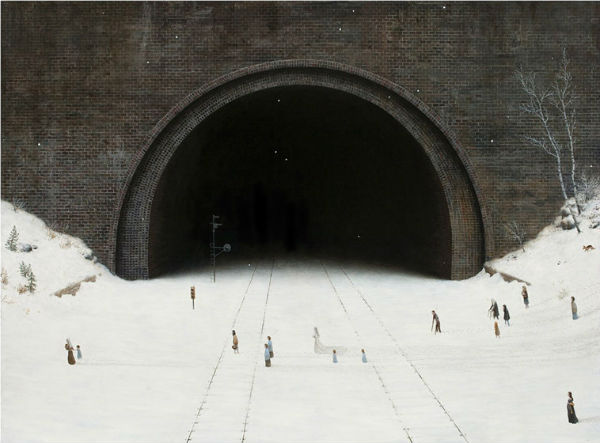 The Wedding Party is a remarkable painting, with something of the pictorial colloquialism of Brueghel mixed with the structure of the sublime in Böcklin. According to the strange logic of dreams, we see a bride along with other women, children, even the old and infirm, all moving down an embankment and across snowy tracks. The gaping darkness of a train tunnel, a massive brick structure, almost negates them. The painting is dream theatre at its very best, and considering that it is 70×95” only adds to its impressiveness. 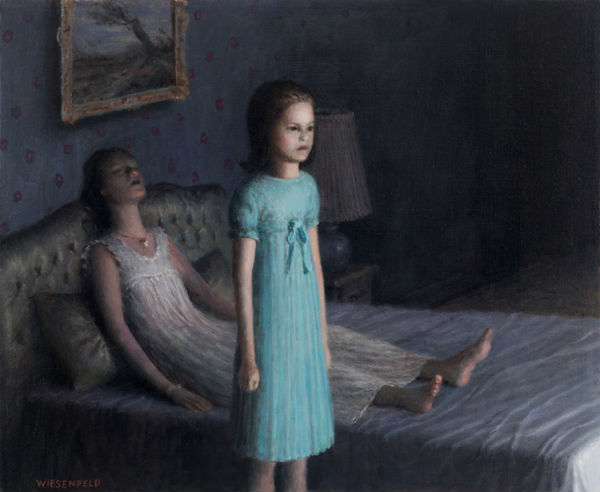 Guest is also rich with psychological and dream drama. A seemingly sick woman lies in bed. Beside the bed stands a young girl in a blue dress. She has a pained expression. Her fist is clenched and she’s facing away from the sick woman, though very much in the drama of the moment. There’s a faint light source toward which the girl is looking. The light has just reached the slipcover on the corner of the bed. Perhaps this is when the guest enters the room. There’s a profound equilibrium of light, also a profound intensity to the painting. The pained faces are fixed in time like the faces of Masaccio’s Adam and Eve in The Expulsion from the Garden of Eden. A friend asked me what meanings I saw in Guest. I said grim separation and loss, psychological inheritance ~ the passing of some familial form of madness. I also kept thinking that if Guest was a poem, it would have been written by Stanley Kunitz. 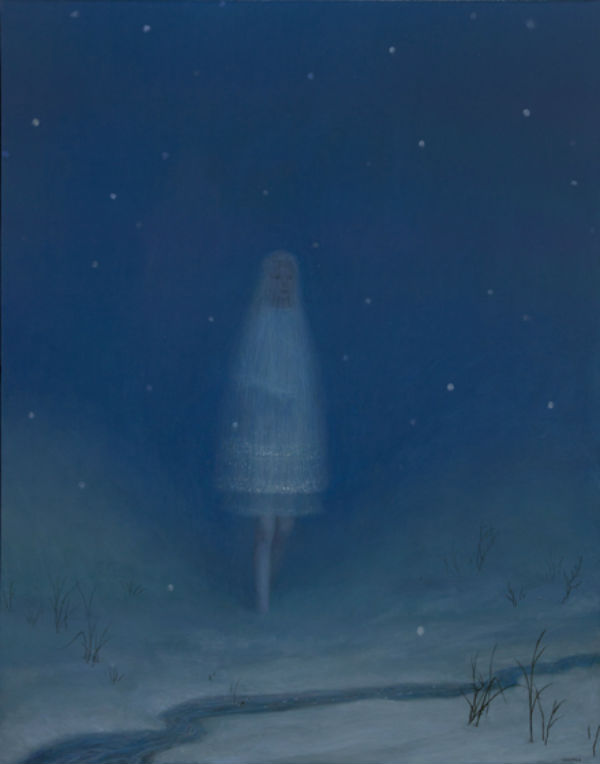 Another wonderful painting is Snow as a Girl. A white apparition appears, a girl light as a snowflake and as ephemeral. Her feet are flowing through snow while she herself is all air, atmosphere and night. She is also that which the artist conceived as being of the essence of snow. Snow as a Girl is another name for snow. Wittgenstein wrote that “the limits of my language means the limits of my world.” In Wiesenfeld, all limits melt away and we are naming the world ourselves. 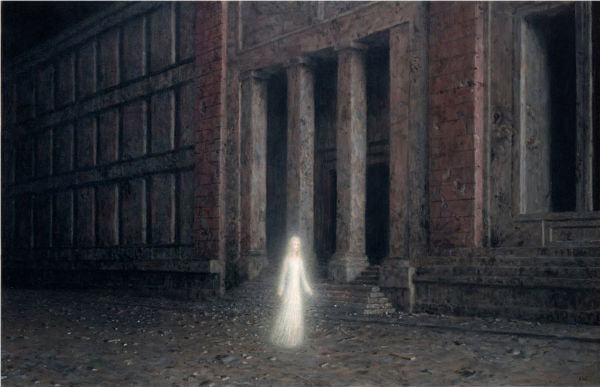 A similar apparition appears in the painting, The Night. An ethereal girl is outside a strange building. She is not more than a point of light. The building looks like a recently abandoned museum or bank. Pillars have a muted glow, as of granite or marble. The apparition could be easily eclipsed by the building and yet it is her light that illuminates its darkness. A wonderful balance is achieved. 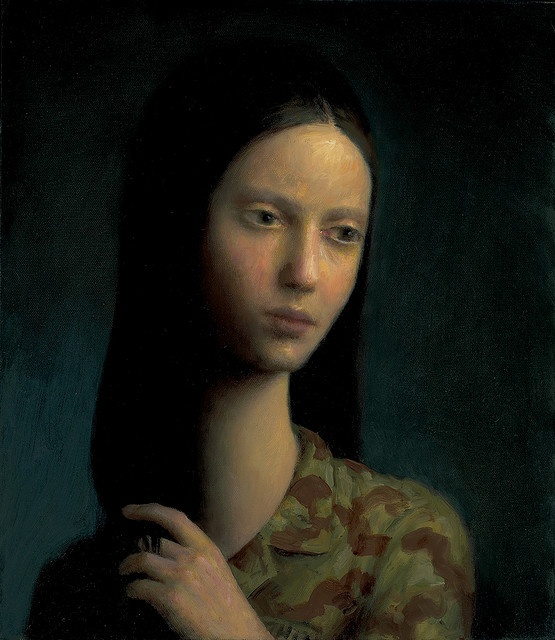 This attention to light can also be seen in Wiesenfeld’s beguiling portrait, Soldier, which seems a painting predestined to the status of icon. The soldier is a young woman. She’s a soldier and Madonna in one. Her long neck and the tilt of her head reminded me of Parmigianino’s Madonna with the Long Neck. Wiesenfeld’s Madonna/soldier has a compelling gaze which seems to fill the whole canvas.  Many analogous archetypes and unconscious primordial polarities of “Great Mother” mythology can be gleaned from this painting. Is she the nurturer who devours or the monster who suckles?

The beauty of Aron Wiesenfeld’s paintings is that they make oneiromancers of their viewers. Even before we realize, we are intuiting, feeling and divining the meaning of them ~ just as we do with our own dreams. His figures do not themselves communicate, yet they are points of intense communication. Wiesenfeld communicates as much through color as through interiority. Like Gaugin, he knows that “color… like music, is a matter of vibrations, (and) reaches what is most general and therefore most indefinable in nature: its inner power.” Wiesenfeld’s colors have a muted power with deep vibrations reminiscent of Balthus, and like Balthus, his subjects are often young women, though decidedly asexual in comparison. Wiesenfeld paints forms suitable for comprehension and yet presents them subjectively, knowing that the object will be seen symbolically by the subject viewing it. At the same time he transcends the literal. In a thoroughly materialistic age, Wiesenfeld offers us a way back to the primordial world of dreams, and ultimately to ourselves.