My grandmother wears silk almost everyday, I believe
it belongs to her mother’s mother, somewhere in China, somewhere in the spine
of continents that have become victims of history. The threads would be a faded pink
with dragon prints posing their last breath, and I remember her feet, bound,
smaller than my heart, smaller than any aches
we bring into our lives. Beauty will betray us someday. 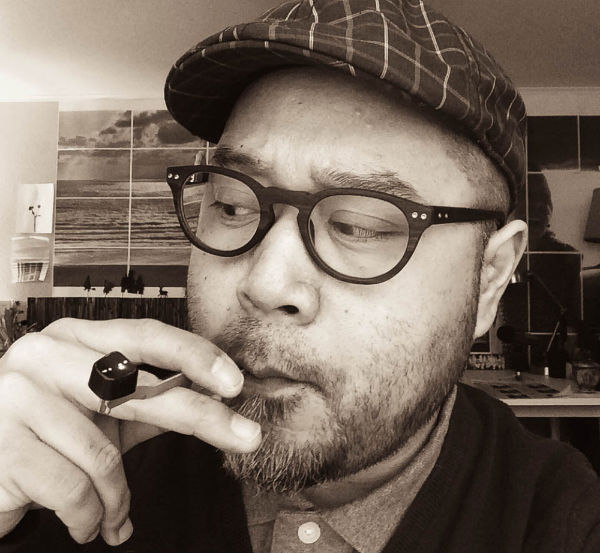 am Roxas-Chua stands up on a stage before us, seemingly unaware of the gathering of friends, fellow poets and fans who have come to take their seats. Instead, his attention is on the pitcher of water in his hands and the porcelain bowl that is slowly receiving his offering.

For a while, we just sit and watch. Respectful silence.

Finally, Roxas-Chua takes a poem from the top of his stack on the podium. Immerses it in the water. Gently. A baptism.

It’s a private moment, immensely personal, and no one wants to interrupt.

At last, he looks up, almost as if startled to find us here. “Sometimes you just have to let things soak,” he says, and the reading begins. 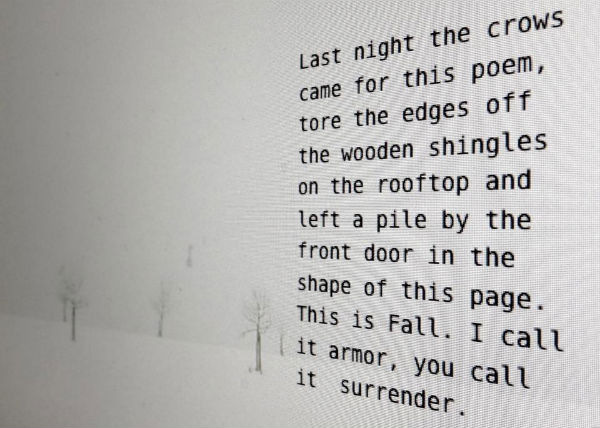 Four days later, Sam is showing me around The Poetry Loft, an upstairs suite in downtown Eugene, Oregon, where the 41-year-old poet does much of his writing. It’s also from here where he promotes fellow poets. 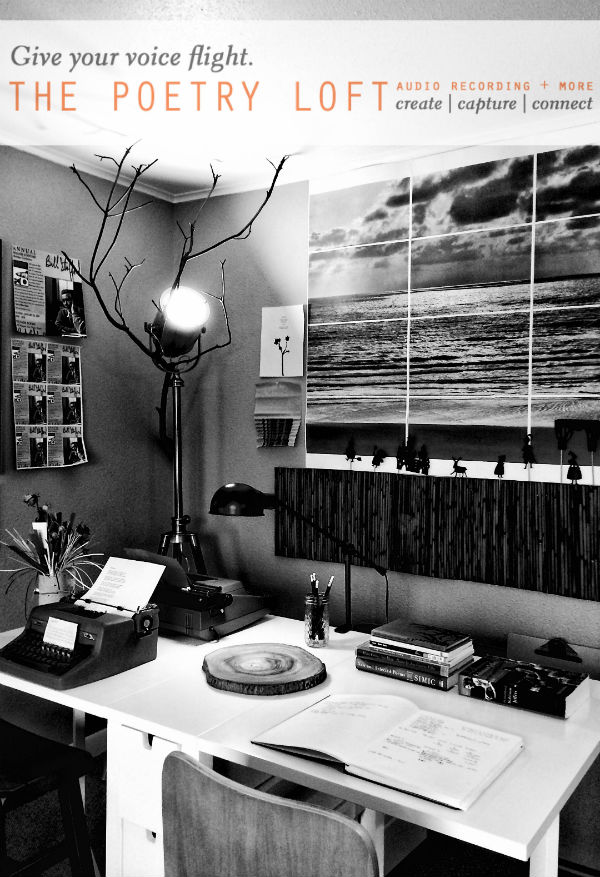 The loft is a monument to poetry.

There is an antique typewriter, two of them in fact, but that’s only one of the charming elements here. 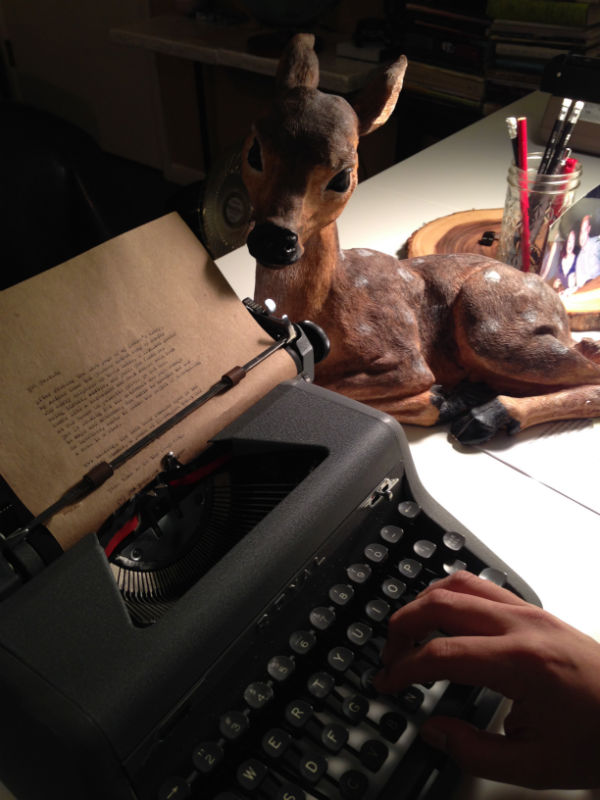 For one of his readings in years past, the poet made dozens of origami boats which he passed out to each of his audience members. 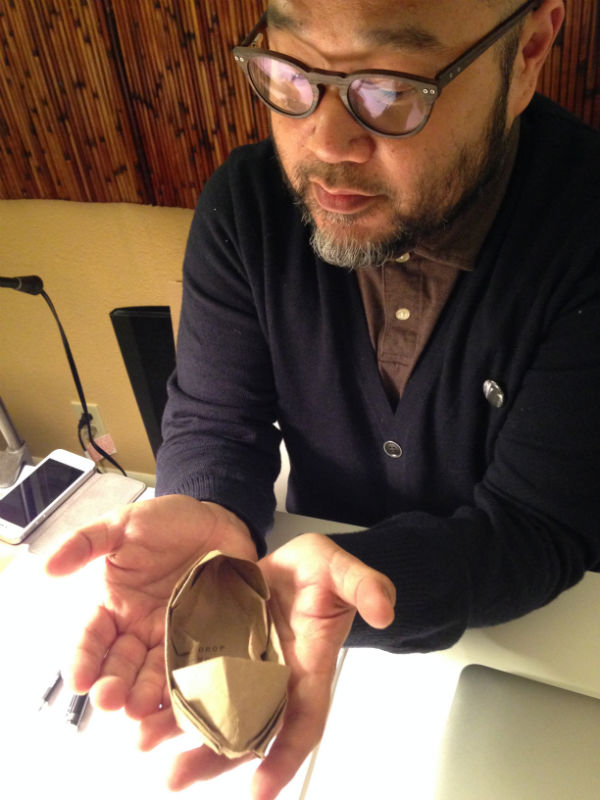 Poet Sam Roxas-Chua with one of his origami boats he hands out to audiences, Photo: Deanna Piowaty

A few of these he keeps still at the loft, along with his display of clay creations which he calls, “Wish People,” so named because they are made just large enough to hold a wish you might like to write down for a loved one before psychically sending it off to the universe. (I was reminded of the May character in the Sue Monk Kidd novel, The Secret Life of Bees.) 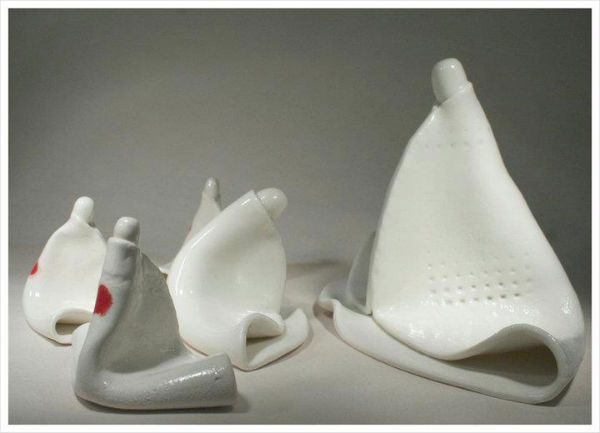 But the star of the show are Roxas-Chua’s walls, papered with the works and photographs of his greatest literary heroes: those who have gone before him and perfected the art, inspired him, and those making the journey with him now, his mentors. 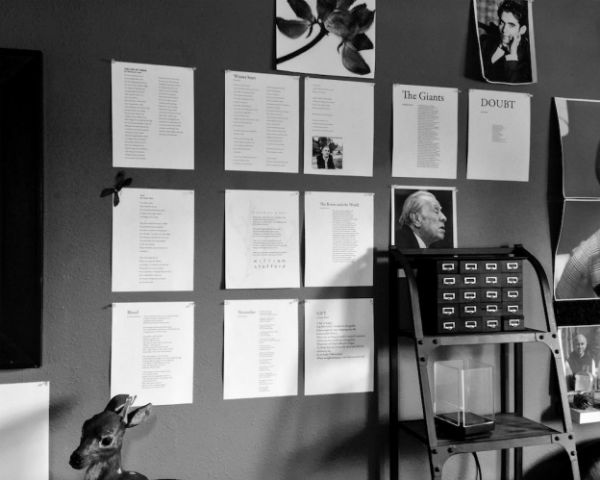 The largest amount of space is given to the two women most central to the poet’s development into the man he is today: the nanny who raised him in the Philippines, and the Chinese woman who adopted him there. 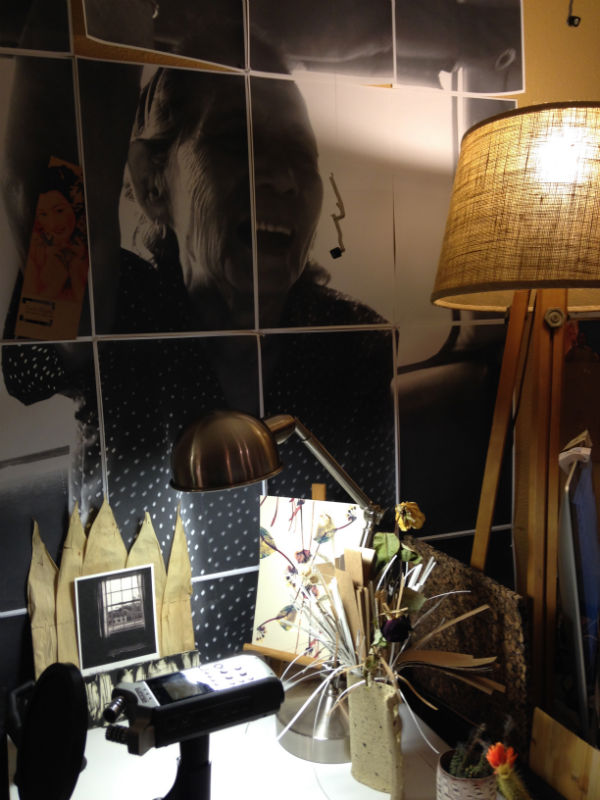 Photograph of Sam Roxas-Chua’s nanny, Mila, in the Philippines

I look for you in songs,
in books, in photographs.
I look for you on my tongue,
in drawers, inside trinket boxes,
behind the lamp, the door,
in the pocket of your dress.

I look for you in daylight
until the air is too thin to breathe.
It is there my wrists limp, my eyes
gaze in between books on the
bedside table, hardbound, softbound,
the heart; its chapters, the epilogue,
the ending, its last page.

I look for you on paper,
on the dial pad, in the mirror,
the doorbell, the soft chair,
your glasses, Asia, and the
big-big Pacific. 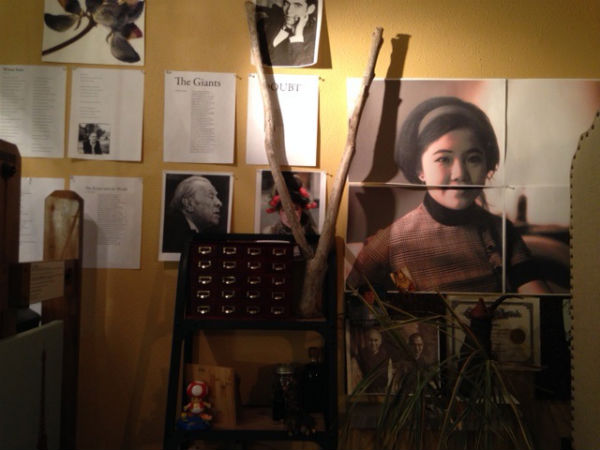 Listen to Sam Roxas-Chua read one of his poems and what you will hear is a story-weaving that can best be described as magic realism for the ear, a combining of the maternal wisdom of his Filipino nanny with a decidedly contemporary American appreciation for irony and playfulness. The result is one of the most original voices around.

when i was a boy i had four am thoughts. those thoughts had brothers who ate the stars. those stars had sisters that knew my secret name. my name is a bell, swinging on a tree. that tree is my father. he is half a boy. lost in the language of fists. i am a thread, a fiber, a cough of light, just a cough of light

[Listen to “When A Poem,” from Roxas-Chua’s new book of poetry, Fawn Language, available this coming week.]

Roxas-Chua was born in Manila, Philippines, but adopted by a Chinese family there. He met his Filipino birth mother for the first time only two years ago. The poet recalls standing in front of her and asking that burning question familiar to anyone who has been put up for adoption: Why had his birth mother given him up?

“It’s that moment where Paulann Petersen says, ‘Someone is waiting for your voice.’ Well, I was waiting for her voice.”

And her response? The reason his birth mother had left her baby behind at the hospital?

Roxas-Chua’s already gentle voice becomes even softer. “She did not think I would make it.” He places his hands on the table. “So she abandoned me.”

A dying boy
does not count to ten.
He does not need
to see a playground,
a hot iron, a meteor shower.

He needs a big white towel
underneath his body,
a box of Crayola,
minus the black and white.

He needs to know
what bravery is
and how many blinks it takes
for the eyes
to conjure up the ocean. 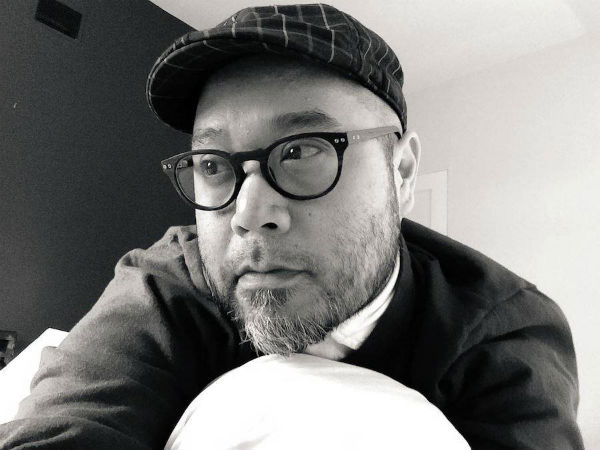 I ask if poetry served as a way to reclaim his sense of place and belonging, and, if not to rewrite the past, if poetry at least helped him to make peace with it.

And yet, as his mentor, Marvin Bell points out, says Sam, “Poetry will not resolve your life issues. It will help you express it.”

We dance to the bellow of foghorns,
mother to boats, father to sailors
eating the minutes of lost vowels
at sea. I surrender you

my egg beast,
found during an evening walk
from Echo Island to home.
I will keep the slingshot rock

that pierced your shelled sisters—
eyes still asleep,
missing you by a milligram
of a stout second. You,

my trill, my fatherless pink—
with heart of frozen pebble
dying in the ambulance
of my cupped palms;

my breath is the sound of water—
sleep, sleep.

[Listen to “Sonata,” on SoundCloud.]

Will he tell me now about the woman who looms larger-than-life on this wall at our left? His nanny?

A smile. Her name was Mila. Throughout the decade he was under her wing, (Roxas-Chua’s family would migrate to the U.S. when he was ten years old) she would share the traditional folktales of her Filipino heritage with young Sam, using the elements of story to teach him the lessons she felt most pressing to impart.

If she wanted him home before dark, knowing his wanderlust and curiosity, she would give warning in the shape of a tale: “There’s a reason you should be home before sunset,” she would say. “Because if you’re out and about too late, you will start seeing people who possess no ridge on their upper lip. Such people are not real people,” she would warn. “And they will come and get you.”

Even when as an adult, in 2011, Sam went back to his birth country to see his beloved nanny before she passed, still, those warnings so much a part of her culture conveyed her care: “She knew I was very inquisitive, she knew me, so she would tell me to watch out when I went to the market to get fish, that it was important that I not stay too long and get into conversations with strangers. So she would say, ‘Don’t look in people’s eyes for too long there. Because if you do, your hearts might start beating together. And then you might bring them home. And they might be bad people.'”

Such elements from his childhood teachings make mystical appearances in Roxas-Chua’s poetry. “Recently I wrote something that went like, ‘Brother, wake up! The house is eating itself.’ Or in another poem, I found myself writing, ‘My heart wants to be a bone.'” 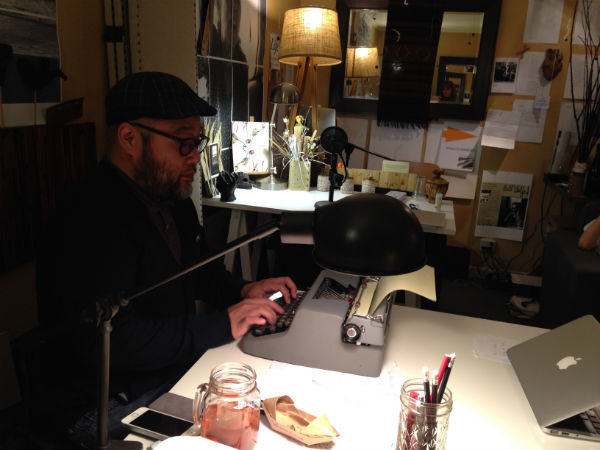 When Roxas-Chua’s parents wished to adopt him, as was required by their traditional Chinese culture, they first had to gain permission from the family matriarch. “They had to ask my father’s mother to adopt me.” The couple was concerned that their wishes might not be granted and they wouldn’t be able to take the baby home. But they need not have worried. As it turned out, the elder herself had lost a beloved son whose birthday had been the same as Sam’s: Valentine’s Day. “Valentine’s Day is a big deal to the Filipinos, and so she said. ‘This abandoned baby must be the incarnation of my son.'”

The Act of Contrition

It’s hard to exorcise bees
you must start at a young age
and answer only to quiet things,
a hum from the television,
a wick’s last spark,
a pulse from a yolk,
study the many hues
of yellow and black,
flight pattern
and eyelash,
climb atop a hill
and offer your body
as pollen, it is not
until then, their black
bean eyes appear and
your penance begins
with a sting.

I asked Sam about his lovely habit of writing poems for people he meets ~ finding himself inspired by something they shared of themselves, and wanting to let that person know that their coming into his life, however briefly, was a gift.

“There’s something about giving someone a poem. It’s my way of saying thank you for being in my world and bumping into me in this life, that there’s something very special about them.”

Although he feels deeply attached to his poems, “to me my poems are like my children,” Roxas-Chua says he doesn’t feel it is his right to hold on to them. That, as with one’s children, there is a time for letting go. And he lets his poems decide when, just as he lets them decide how they want to be shared.

I tell him how much I enjoyed his reading the other night, my daughter and I both.

He responds. “I am happy to hear that. That tells me I was reading them how they wanted to be read.”

He quotes the words of Oregon’s Poet Laureate, Paulann Petersen, whom he credits for being the one, after Roxas-Chua heard her speak one day, to move him from the place of ‘he-who-dreams-of-writing-one-day,’ to ‘he-who-actually-begins’: “She was speaking at a poetry conference in Newport (Oregon), making a public address at this conference, and suddenly it was like the lights turned off and it was just Paulann and me in the room. And I heard her say, ‘Somewhere, someone is waiting for your voice.’ And it’s true. I do believe that. Someone, somewhere is waiting for your poem ~ regardless of whether or not it is a good poem or a bad poem. Someone is waiting for it… So get writing.” 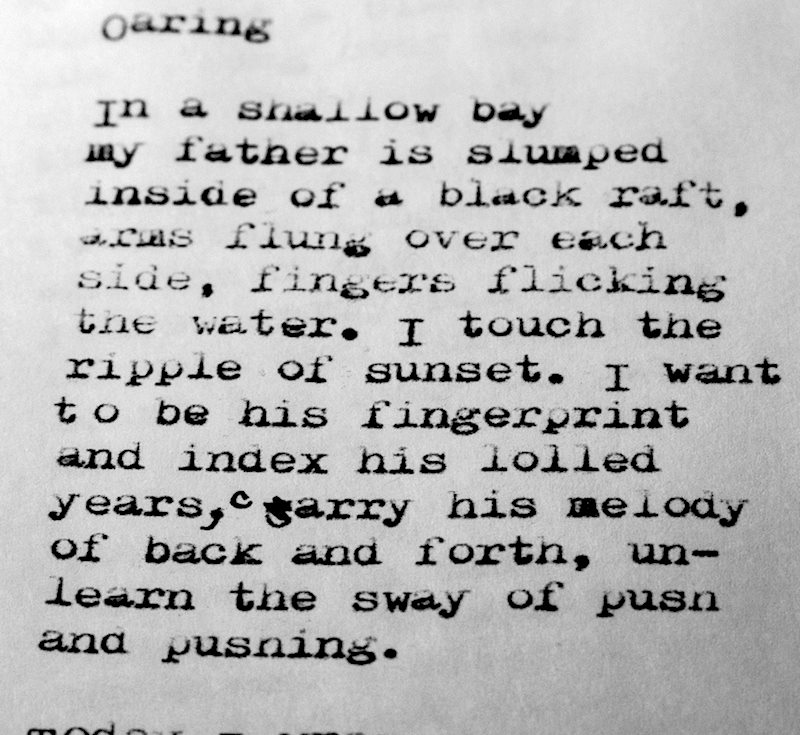