o say that Rose Freymuth-Frazier’s art captures the imagination would be telling only half of the story. By placing her female subjects in dangerous, often seedy, surroundings, and clothing them in cheeky garb, we feel at once taunted and concerned, attaching our own stories to the scenes she creates. Perhaps we want to be consoled that the women in her pieces are not truly being subjugated or exploited, even as we fear for the worst… 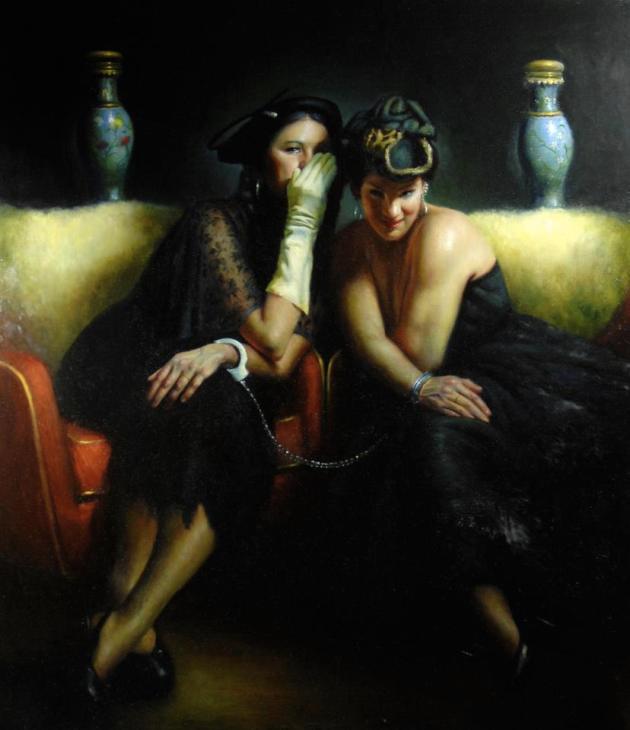 New York, New York ~
Deanna Phoenix Selene: What kind of questions do you hope viewers will ask of themselves? Of society?

Rose Freymuth-Frazier: My paintings are allegorical, but I expect each viewer will bring their own interpretation to a piece. The question one asks depends on the individual interpretation. If it’s a superficial read of literal abuse or abasement, then that is the subject being addressed within the viewer.

Rose Freymuth-Frazier: If there is a more complex interpretation stemming from one’s life experiences, then the piece becomes personal and asks questions the viewer is interested in answering.

Deanna Phoenix Selene: What have been some of the comments you’ve received from your fans? Any surprises? Who reacts more strongly? Men or women?

Rose Freymuth-Frazier: I think the responses from men and women are very different but equally strong. I suspect women generally identify more with the subjects. They find nuanced significance and empathy and commiserate with the women in my paintings.

Rose Freymuth-Frazier: However, once in a while, when a woman doesn’t like my work, they really have a strong aversion to it!

Rose Freymuth-Frazier: I have a feeling men often don’t want to get past the initial nudity which they find tantalizing. They attempt to look around, through or past the more difficult aspects of the work, preferring to enjoy the beauty of the female figure and not have to deal with the not-so-nice connotations and what that might bring up in them. I don’t mind if a painting is taken for sheer beauty; I think that’s a valid place for art as well.

Deanna Phoenix Selene: In the relationship of painter-subject-viewer, who has the most power? Does this differ whether the artist is a man or a woman? When the subject is male versus female?

Rose Freymuth-Frazier: Painter-subject-viewer is a mutually dependent triad! But the viewer has the most to gain, to let a piece affect and provoke them or to discard it. They may do with the experience whatever they please. I do wonder how people would feel about my paintings if my gender were unknown. I can think of two women, on separate occasions, who confided in me that they assumed my pieces were painted by a man. I’m not sure what to make of this, but it is interesting.

Deanna Phoenix Selene: As a young woman growing up, what were the messages you received most strongly about what it means to be female? Was becoming an artist an opportunity to challenge some of the ideas that did not ring true?

Rose Freymuth-Frazier: I’ve been very interested in the idea of nature vs. nurture when it comes to gender roles. So many little girls love pink and the overtly feminine without external training. I know that was the case for me. I was raised by consciously counter-culture parents away from mainstream ideals, and I still wilted before tutus and tiaras and flirted with fairies and flowers. I think these feelings do connect directly to the visual. I don’t understand it, but as a painter it’s interesting that gender and color can be linked. I still secretly salivate at the combination of pink and purple, recalling the ache I had for those colors as a little girl. Nobody told me to be pretty in order to get married and have children (neither of which I’ve done), but I’ve always longed for beauty and still identify very strongly with many things “feminine.” I don’t doubt that this is something innate in me.

Deanna Phoenix Selene: When you are working on a painting, who has the most influence on the shape the piece takes? Your imagined viewer and how you hope to affect them? The painting itself and where it asks to go? Or your own pleasure and the images that personally tantalize you?

Rose Freymuth-Frazier: Paintings are funny. They start with a concept or feeling. After fearlessly (and often foolishly) launching into a piece, the reality sets in. The initial grandiosity is forgotten in the sheer work of bringing the painting to fruition. The potential viewer is forgotten; there is no personal tantalization. There is some directive from the piece itself in navigating it to the best possible conclusion, which is all one can really hope for.

Deanna Phoenix Selene: How do you as an artist balance that tension between the desire to create something aesthetically pleasing versus wanting your work to challenge and perhaps even provoke the viewer?

Rose Freymuth-Frazier: This is one of the most important ingredients for me in my work and the two go hand-in-hand. I think beauty at its best can express itself by making opposites converge in a unified expression.

Deanna Phoenix Selene: Has a painting of yours ever made you uncomfortable, so much so that you nearly couldn’t finish it? A theme that actually proved too emotionally challenging?

Rose Freymuth-Frazier: Years ago I painted a huge close-up of a double penetration. It was hard to look at. I have no idea where that painting is now.

Rose Freymuth-Frazier: Paintings I love to look at most, pieces by Odd Nerdrum or Da Vinci for example, have such an elusive quality, something visceral that almost cannot be named. It is tenderness, a sensitive rendering of the human portrayed. It’s an emotion captured within the paint as if it were a skin drawn tight over a real, human experience.

Deanna Phoenix Selene: What ideas do you plan to explore next?

Rose Freymuth-Frazier: I am interested in androgyny and sexual ambiguity as well as hermaphroditism (what is now more often called intersex). The poetic combination and contrast of Hermes, God of male sexuality, transitions and boundaries who moved freely between the worlds of the mortal and divine, and Aphrodite, Goddess of female sexuality, love, beauty, pleasure and procreation embody the tension and balance I find aesthetically and conceptually pleasing. I know it’s an artist’s romanticized fascination with a human ideal. In India the Hijra, are recognized as a third sex, and a village in Indonesia counts five sexes, believing the world will fall out of balance without them all. I’d like to paint some more pieces around this subject matter.

Deanna Phoenix Selene: Best advice you’ve ever been given?

Rose Freymuth-Frazier: I like what Giacometti said: “The object of art is not to reproduce reality, but to create a reality of the same intensity.”