Home » Mind-Body-Spirit » Athletes » Maureen Manley: It’s not about being better than everyone else. “We are all extraordinary.”

ver since she witnessed Connie Carpenter bike her way to winning an Olympic gold medal in the 1984 Summer Olympics, Maureen Manley had her heart set on one thing: becoming “the best female cyclist in the world.” 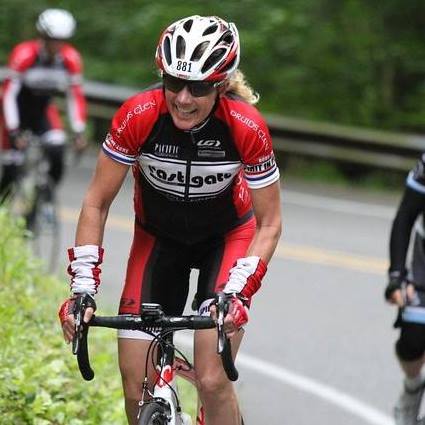 Training alongside Lance Armstrong, Manley became a member of the US Cycling Team, set a national record, earned a silver and two bronze medals at the National Championships, and won a silver medal in the 1990 World Championships.

Then, at age twenty-six, while racing in Le Tour de France Feminine, Manley’s vision blurred and she crashed. Doctors informed her she had multiple sclerosis.

“It was a dark time for me,” reports Manley. “I couldn’t walk well, I couldn’t see well. When I lost my cycling career, well, that was my art. Cycling was my self-expression. Athletes might not look like artists, but it’s a process to create the training, to take your body where you want it to go.”

Ever since she was a little girl, says Manley, “I have wanted to be extraordinary. I was the kid who climbed a tree on a windy day just because I wanted to experience it.”

Extraordinary as in that other cyclist, Lance Armstrong?

There is a difference, Manley says, between identifying oneself with a story one has fabricated, and, worse, as in Armstrong’s case, devoting all one’s energy to preserving that story, versus being extraordinary in the way we live every moment: throwing ourselves out into the unknown and seeing what magic could be made of it.

This latter kind of extraordinary doesn’t depend upon being better than others in order for the story to be a good one.

With cycling, there was a definite camaraderie, Manley says. Working as a team. “Really understanding that the whole truly is greater than the sum of its parts. It’s a simple fact that the more that cyclists can work together, the faster and farther they can travel.”

So my being extraordinary doesn’t take away from what makes you special?

Manley laughs. “No, there’s room enough for all of us. We can all be extraordinary.”

What goes wrong, she says, is when our focus becomes unbalanced. We forget that who we are as a whole is a dance between mind, body, spirit and emotions–that it’s all connected, and that each effects the other. “In our society, we accent and reward the mind and the body. Because this gives us a sense of control.” Manley recalls that she herself was “very mentally and physically strong, but then MS came into my life, and I realized that my journey now was to understand those emotional and spiritual components of myself.”

Ironically, it was only when she started to bring these other parts of herself into play that Manley says her physical health started to improve. “Because now I was pulling from more of what I had to work with.”

For Armstrong, Manley believes that in trying to preserve his story about being a phenomenal athlete–better than everyone else–Armstrong, who has now been banned for life from cycling for doping offenses and who threatened others when they tried to expose him, may have “lost his connection to humanity. I look at someone like him–and I trained with him, back in the day, and liked him then, we were all friends–but I look at how he came to build himself as a demigod, and I think, ‘Wow, he’s got a hell of a spiritual journey ahead of him. Emotional too.'”

Manley herself has had some experience with personal journeys. When at the top of her game, she had been in her bliss. “But then,” as she puts it, “life smacked me to the ground.”

She understands how others when faced with similar losses can easily get to the place where they just want to give up. But Manley insists their story doesn’t have to end there. “People will say, ‘Well, everything’s just been stripped from me,’ and that’s true,” says Manley, “but there are things that are at the core of you that are still there.” And that, says Manley, is the part that truly makes us special, which no one can take away.

“If I were a painter, maybe the parallel would be that I could say, ‘Oh, I only have three colors left. I can’t paint anything beautiful anymore.’ But I still have these three colors. I can blend them. I can create new colors. If I’m not willing to work with what I still have left, well then, I’m not going to create anything new. When I got the MS, I couldn’t see well and I couldn’t walk well, so I had to ask myself, ‘Well, what can you still see?’ ‘How far can you walk?’

So each day, the former world-class athlete gave herself little goals. “For a while it was doing laps in my living room with my cane. And then it was walking from one bench to another in a park. And just, bit by bit, building from there.”

While it is hard to let go of your previous vision of yourself, Manley says to move forward, this is precisely what you need to do. “The mourning process is about feeling sadness for what you’ve lost, which is necessary and important, and takes as long as it takes. But you have to watch it, because you can easily get stuck. If you create your new identity around the loss of what you don’t have anymore, then that loss can become a story that perpetuates itself.”

Manley suggests that there is something that is an even deeper part of ourselves than our loss: that desire of all living things to move towards life. Every one of us, says Manley, are creative beings. If we open ourselves up to meeting the unknown with a spirit of curiosity and exploration, that is when we can create magic.

“In our culture, we all love that feeling of control, that certainty.” But, she points out, too much holding-on can lead to entropy. And that, in turn, can lead to depression. “So many of us find ourselves feeling dead inside.”

Life as art, suggests Manley, is about being able to dance in that place of uncertainty. “We need both. A balance.”

For Manley, this ultimately took the form of designing her own Master’s Degree from Antioch University, focusing her studies on Integrative Wellness, a holistic approach to creating health and overall well-being. She now takes what she has learned and gives talks around the country.

“These days I feel I have a lot of control over much in my life, in the mastery of my vocation I’ve now built for myself. But still, with being an entrepreneur, there’s also always this element of uncertainty. So the sense of control I get is about the choices I make. Being able to create new avenues for myself. I choose to keep myself in that place of moving into something new, discovering what’s around the corner. I see life as a co-creation. For me, that’s the magic.”

Perhaps the ultimate lesson Manley has learned from her disease is that there really is no finish line.

“As an athlete, there’s so much striving and striving, and that served me at the time, because I am a perfectionist. I absolutely adored what I was doing, because I was accomplishing what I’d set out to do. Now, however, my focus has changed. I don’t need to be fighting against something. I don’t need to fight life.” Now, says Manley, “it’s all about living.”

Maureen Manley is a motivational speaker and life coach. She has started the MS Wellness Center at Swedish Medical Center in Seattle, where she lives. Visit her website at: maureenmanley.com

Definition of Multiple Sclerosis from the Mayo Clinic: Multiple sclerosis (MS) is a potentially debilitating disease in which your body’s immune system eats away at the protective sheath (myelin) that covers your nerves. Damage to myelin causes interference in the communication between your brain, spinal cord and other areas of your body. This condition may result in deterioration of the nerves themselves, a process that’s not reversible.

Symptoms vary widely, depending on the amount of damage and the nerves that are affected. People with severe cases of multiple sclerosis may lose the ability to walk or speak clearly. Multiple sclerosis can be difficult to diagnose early in the course of the disease because symptoms often come and go — sometimes disappearing for months.

There is, however, no cure.