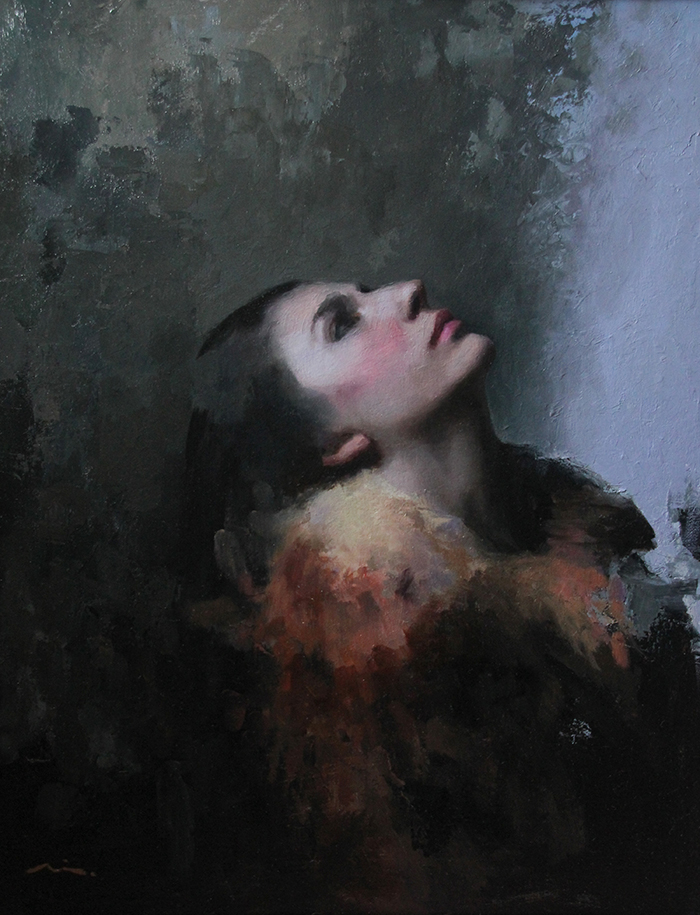 he gift of true intimacy is typically understood in modern Western society as the reward for baring oneself through personal revelation. To be intimately familiar with another person, we believe, means to become the other’s confidant, the person with whom the most protected secrets and private matters are shared.

But in our rush to cut through the isolation of loneliness as neighborhoods and families become more temporary and transient, connections are now being made in hyper-speed, abbreviated, and as a result, something precious is perhaps being lost: intimacy which can only be earned through the extension of time, and space, through the luxury of noticing what is not, after a while, being said, what is being left out, partially obscured. For here is where the knowing begins: in silence. In the shadows. In the empty spaces above, around and yes, even between us.

Deanna Phoenix Selene: I love your ritual of painting a new self-portrait with each birthday. What do you learn about yourself through this? Have you ever made discoveries that surprised you?

Mia Bergeron: For me, this is a way to digest the past year. It’s a very introspective process for me, and I spend a lot of time choosing a pose, lighting, mood that will fit with what I have experienced. [quote]I’m a deep believer in physical rituals as a way to understand our world. Painting is a way for me to understand my own life.[/quote] 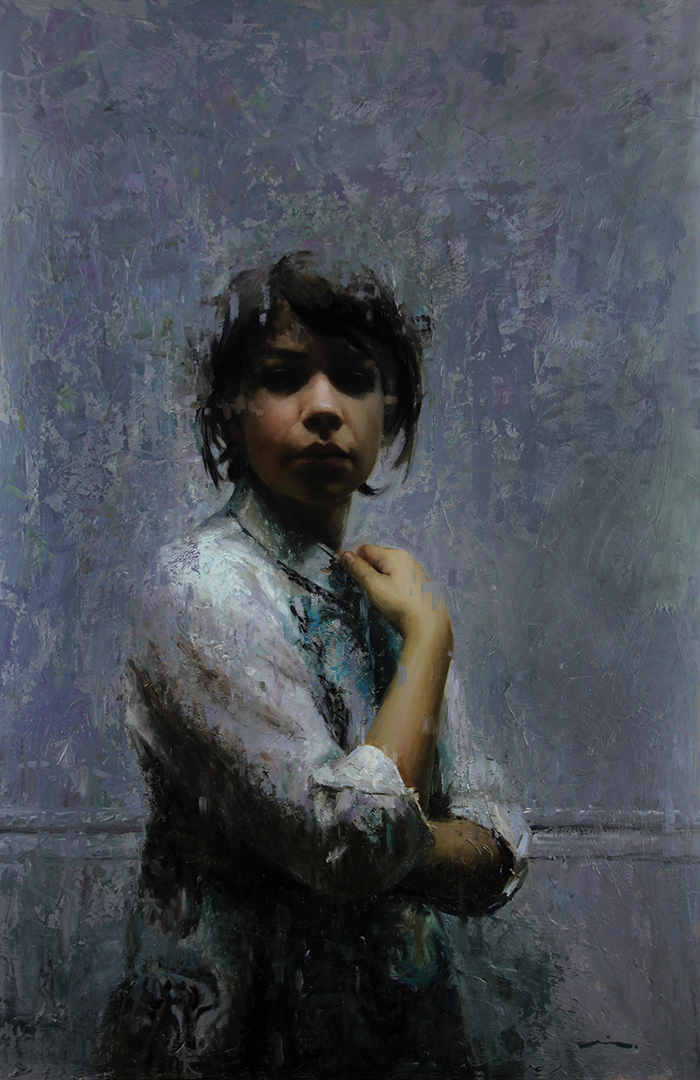 Deanna Phoenix Selene: What was the concept behind the “Pay It Forward” show at Principle Gallery in Alexandria?

Mia Bergeron: The “Pay it Forward” show was derived from the want of the core group of women who started the Women Painting Women phenomenon to give back. We not only wanted to invite other female painters to show with us, thus magnifying the visibility of female artists, but we also wanted to reach outside of the scope of art and galleries. Hence the idea of giving 10% of painting sales to selected charities. 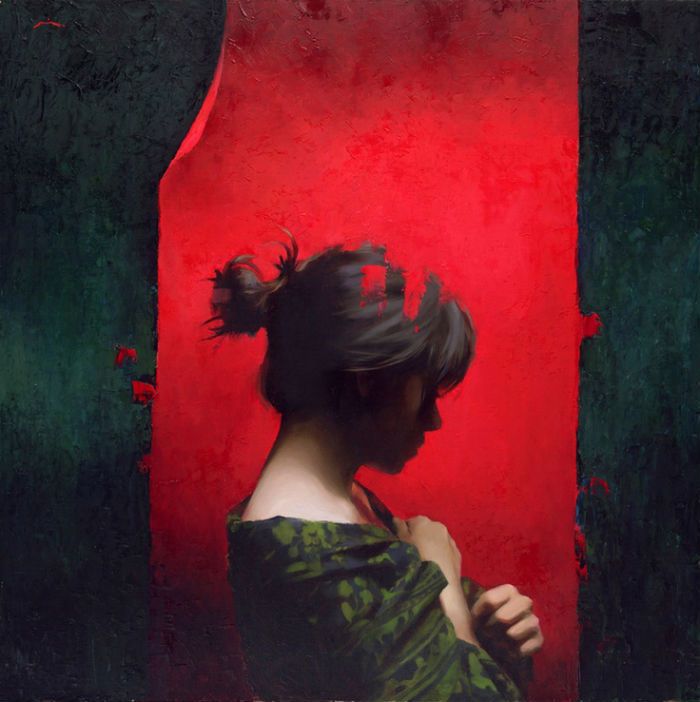 Deanna Phoenix Selene: What is it about the method you stumbled upon in painting Space Between that proved so satisfying to you as an artist? 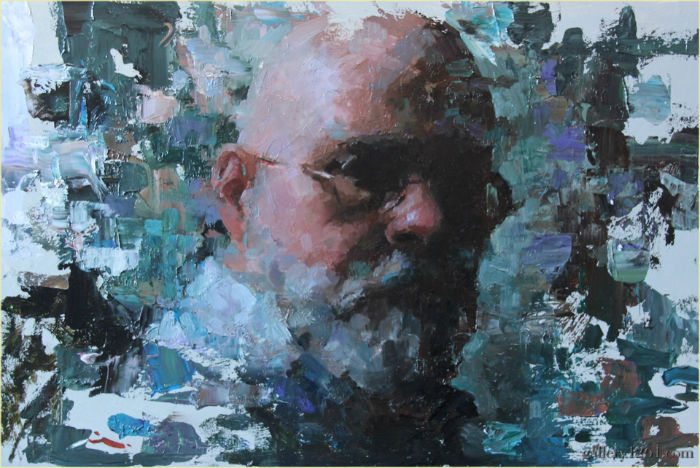 Mia Bergeron: Space Between was one of those pivotal paintings. It was actually made from a deep place of insecurity and frustration. There was this week, you know one of those weeks, where I just could not paint the way I wanted. I kept wiping out, repainting, wiping out, scraping. Finally, at the end of the day that Friday, I just picked up my palette knife and literally threw on a rough, ambiguous sketch of this man I found so fascinating to paint. After I steamed and fretted all weekend, I came back Monday morning and for some reason, I found myself sanding the surface of this thick paint, then started to paint with a brush slightly more refined skin tones. I repeated this same process over and over again, and really fell in love with this technique. I was fascinated with the textures I was creating and the harmonizing effect from the sanding.

I think what is so satisfying about this method is it really goes with my personality. I have always been a fast “starter,” and this allows me to look for big effects and color notes without getting bogged down by smaller details at the beginning. The effect is that I sort of creep up on the details, something that I really enjoy. It’s like I savor each step of the painting fully, then move a little bit closer.

Deanna Phoenix Selene: Have you ever frightened yourself with the intimacy or honestly you’ve created with a painting? I’m thinking about When You Get There, in particular, which takes quite a different perspective than what the viewer has come to expect from you. Suddenly, it feels as if we are the ones being scrutinized. 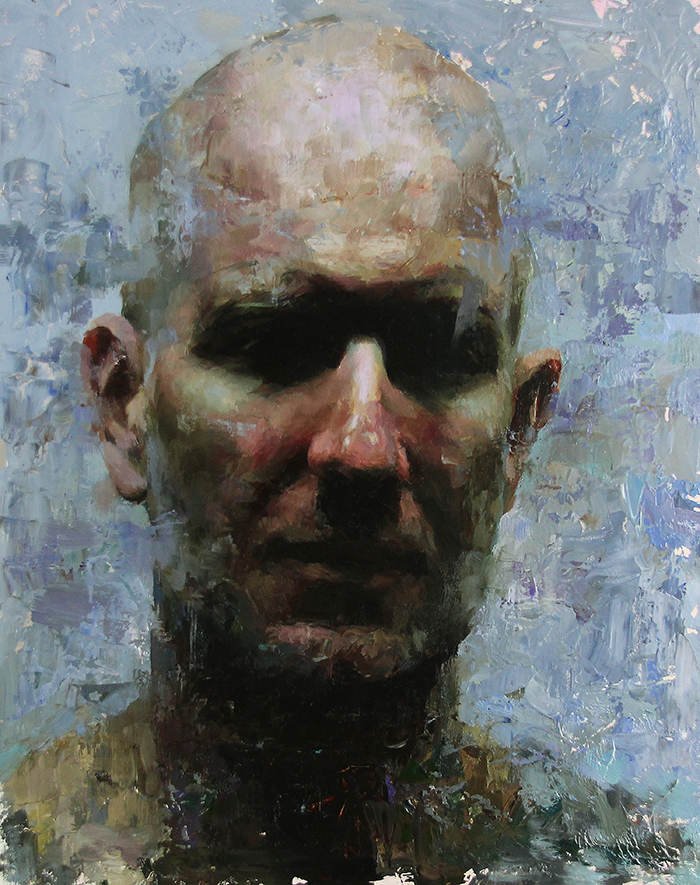 Mia Bergeron: Ha! I think all of my work is about being vulnerable, which in turn means I’m constantly frightened by its intimacy. Though I have to say When You Get There strikes a particularly strong chord for me. This is a painting of my boyfriend John. It’s a strange thing to paint someone you love: I had to really fight my inner perfectionist not to chow down on all the details and get it all “right” immediately. Again, this is a painting where I savored every layer, and fought the urge to jump in too early. Sometimes I find painting details too early a bit like a performance… like I have to prove I can do it right away. But when I do take my time, the result is an extremely layered portrait.

When You Get There is my most recent painting. I was playing with painting the atmosphere around a person instead of the person directly. There are a lot of patches of paint that are in the way of the viewer seeing the subject, and I did this purposely. Oddly, having an obstacle block and hinder our view of something clear actually makes us realize the space between us and the subject. We focus slightly away from the subject, maybe a few inches in front of him. Somehow making  the space the center of attention really adds to the intimacy, I think.

[quote]For me, I think knowing someone and being known is very similar. You savor each layer, and try to be honest and not show off too much as you are learning, seeking, meeting. The title When You Get there refers to this process. This is one of the few paintings I’ve done that I wish I had not sold. It had so many lessons for me, so many moments of true awareness.[/quote]

Deanna Phoenix Selene: We feel this same sense of ourselves being the one scrutinized in Disarmed, Elasticity, and Perceptions… 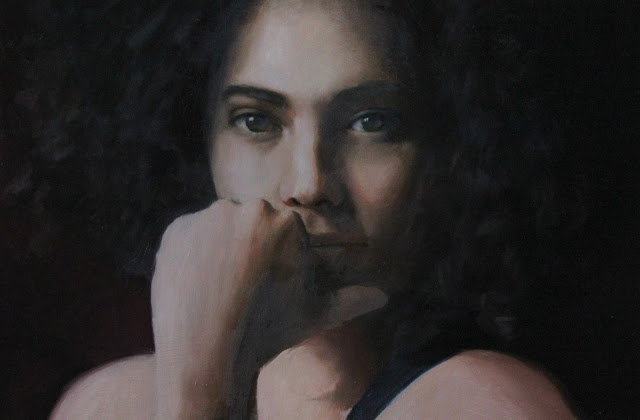 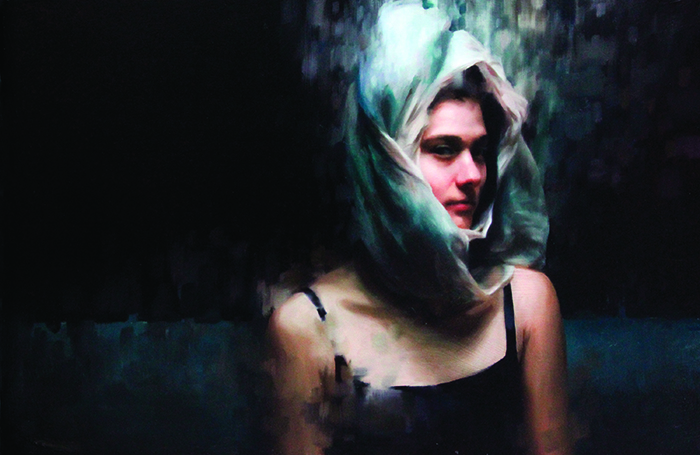 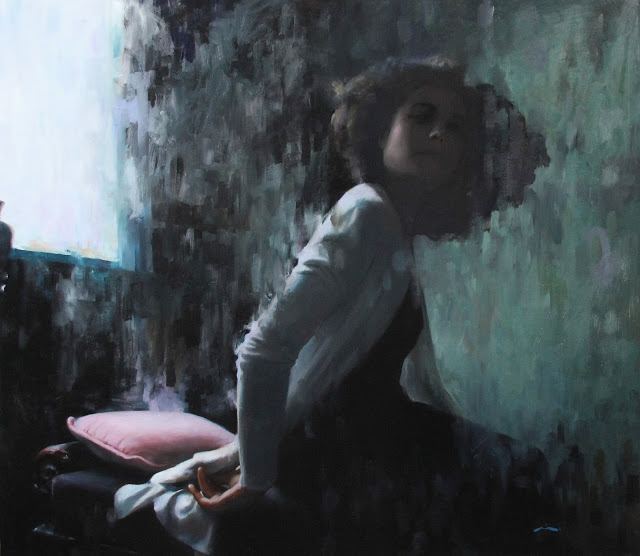 Mia Bergeron: I’m so glad you can see this in my work! As an artist working alone, you often wonder…. Again, I’m working from a place where I’m just trying to listen to what feels honest, what pacing works for me.

Deanna Phoenix Selene: A different kind of intimacy is created with Lucid. Just an exquisite piece. 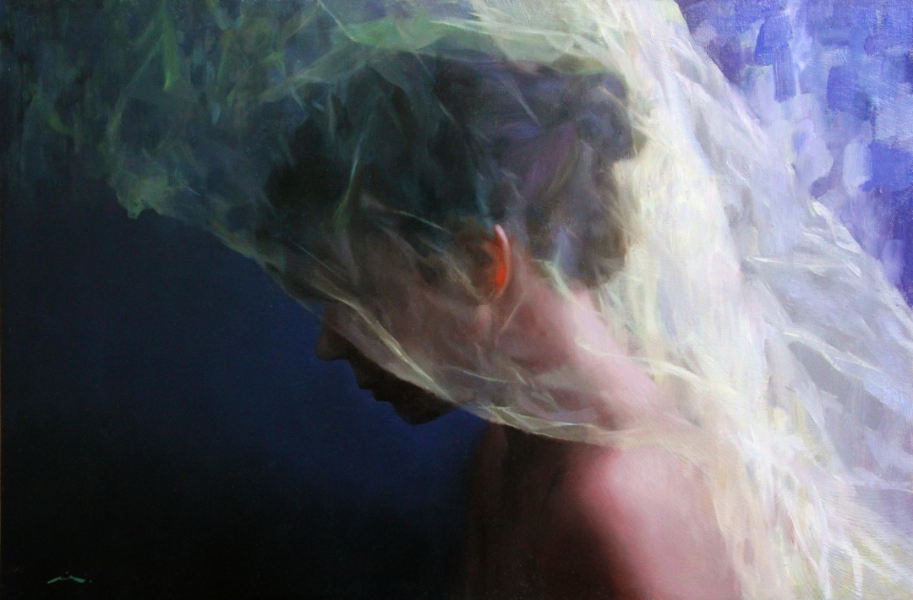 Deanna Phoenix Selene: Journalists are often criticized for crossing boundaries of privacy with those they profile. Does such a line exist for the artist? Is it ever possible to reveal too much? What is the responsibility a painter has to her or his subject? To her or his audience? Are the rules different when the subject is a child? 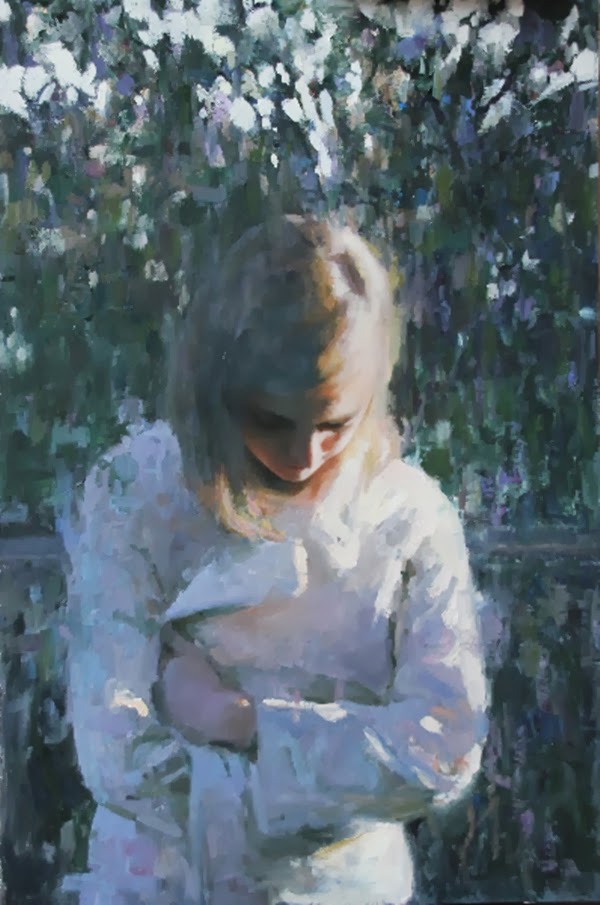 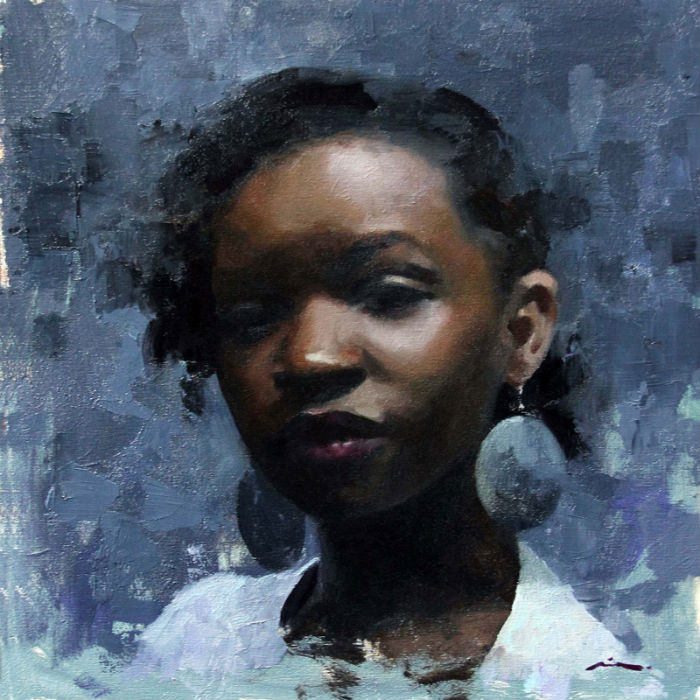 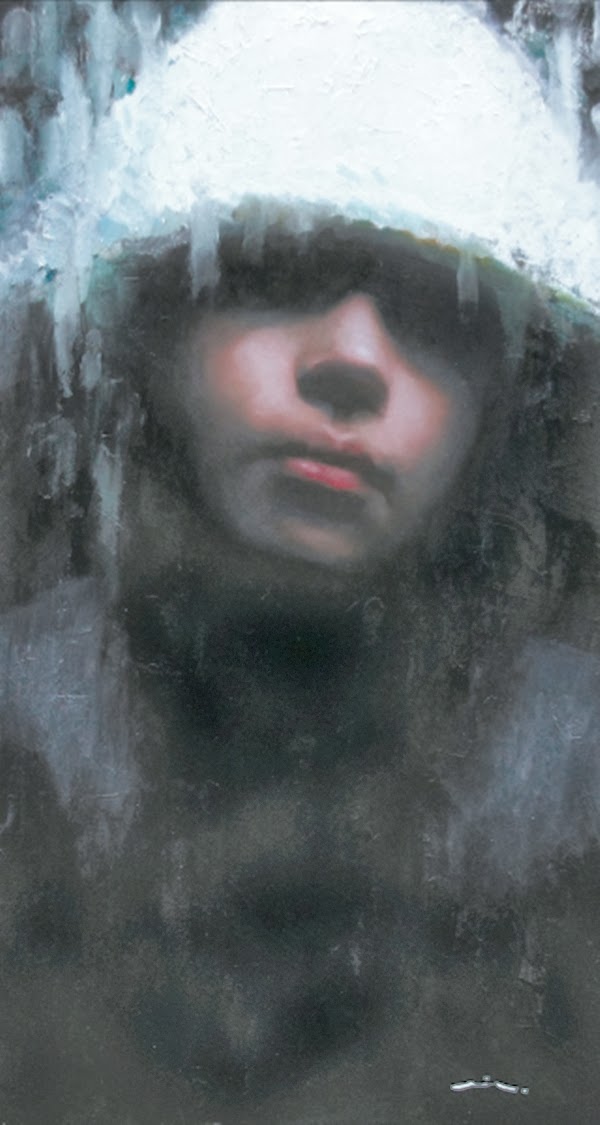 From the Depths | Mia Bergeron

Mia Bergeron: [quote]One thing I have learned about art is that it does not lie. To quote one of my favorite writers, Annie Dillard, “We live in all we seek.” I think this sums it up for me. If I seek to show something that is robbing a subject of its grace, I will end up with a painting that does just that. If I seek to reveal more than what I know, the effect may be hard for me to see, but it will be honest. I don’t think we as artists are always in full control of what we depict. I do however, fully believe in intent. I think if an artist is trying to be curious and honest about what they see ~ be it hard, ugly, moving, beautiful, disturbing ~ then the so called “rules” are out the door. [/quote]I think this is the artists’ responsibility. I may even think this is an artist’s only responsibility, but I’m not totally sure. I also think that people are very similar: What I see, what I try to depict, what moves me, well, someone else out there will see it too. Someone besides me will be moved too.

Deanna Phoenix Selene: Lift is another of my favorites. Can you tell me what led up to the painting of this?

Mia Bergeron: Lift was a bit of an experiment for me. I have always admired Vermeer, Andrew Wyeth, and a lot of Asian art for their use of negative space. I love looking at the parts of a painting that don’t feature any particular object, and just seeing those areas as pure abstraction. 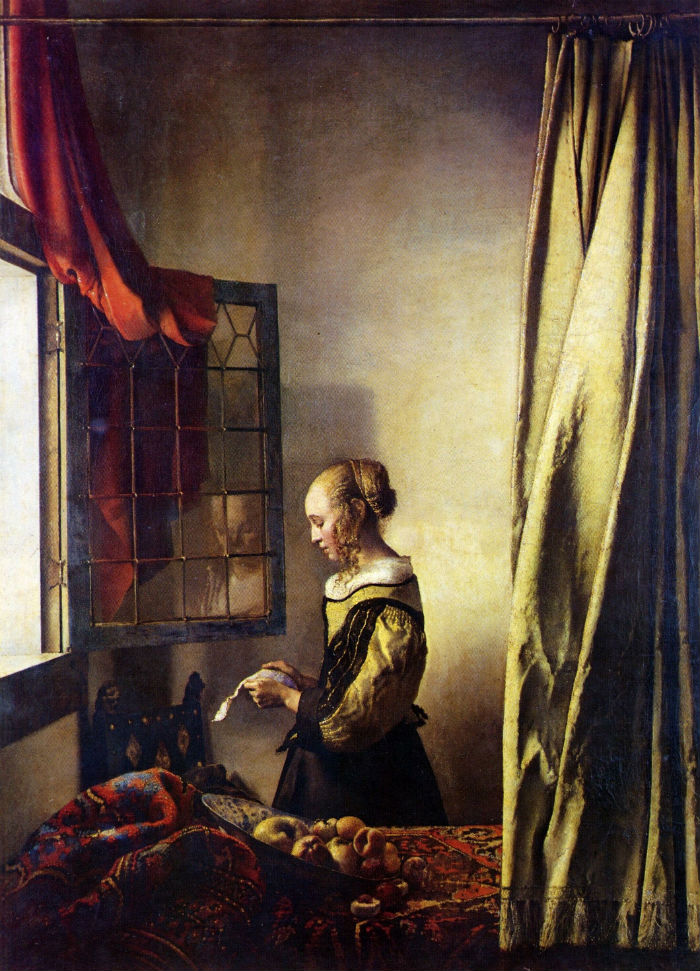 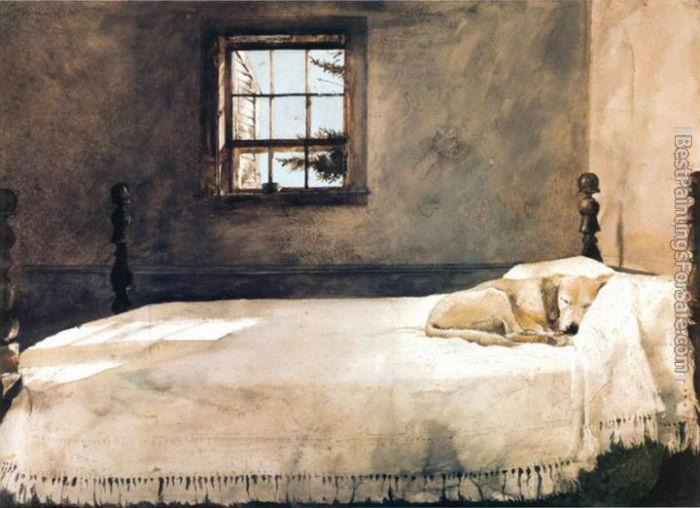 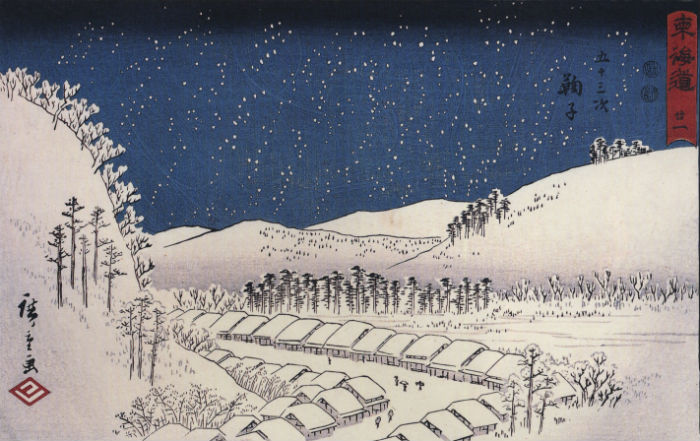 Mia Bergeron: I tried to work with that idea in this painting. I also wanted to show a pull upwards, since the image is so bottom-heavy. Conceptually, Lift is somewhat about waiting for the moment to be taken out of one part of your life, and being placed into a next phase. I wanted to stress the aspect of emptiness in a positive way here, like the quiet that comes with waiting. 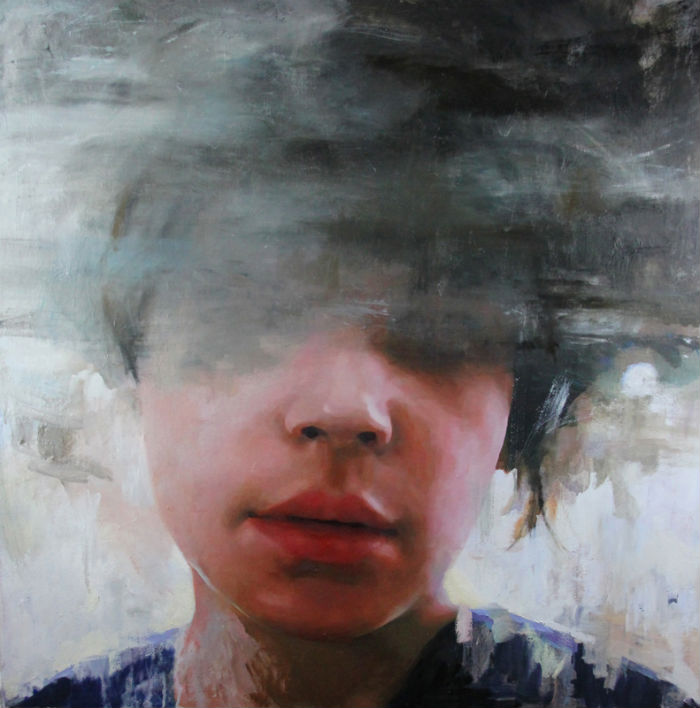 Mia Bergeron: This is a hard painting, but one that is also pivotal. I painted this as my 33rd birthday portrait. That was a hard year for me. I had my first experience loving and helping someone who had mental illness. This painting, at its core, is about fear. When we experience one of the things we fear most, and we survive, we are left with this strange emptiness mixed with strength. Imagine facing the thing which scares you the most. What do you feel like the next day? Strong? Fearful? Numb? Angry? Grateful? In my own life, I felt all of these. I kept telling people I felt like I had been blindsided by fear.

[quote]This painting actually started off with an entire face: eyes looking right at you. As a trained portrait painter, I know eyes are always a big deal for people. So much importance is held in the gaze. When my deepest fear happened, I wanted to see so badly: the future, what was going to happen, how it was going to leave my family. But I couldn’t. I literally had no control. That was the day I wiped out the eyes. As I mentioned earlier, it is the responsibility of the artist to be honest. I think I was really honest in this painting.[/quote]

Mia Bergeron: There are so many, but one of the best moments I have ever experienced is when someone wanted one of my paintings badly, but they could only put $20 a month towards it. They did this for years until the painting was paid off. I know I have wanted art that badly too, and it’s a beautiful reminder that art has purpose, that it is important.