omething has happened to our relationship with wonder.

In our refusal to be made a fool by placing naive trust in what in all likelihood may eventually betray us, skepticism has set in.

Dreams we nurtured in our youth that never quite materialized, at least in the way we imagined, have given way to advice given to our children to plan smarter than we had. Avoid the trap of wishful thinking. Expect less and you won’t be disappointed. Dreams are a Pied Piper that will only lead to drowning.

But what has been gained in this strategy, and what lost?

When we close the door on wonder, we are proclaiming that all that remains to be explored and understood is already known. The great mysteries of life solved and neatly filed away. No more surprises left to be had.

Except that’s not quite the way life works, is it? Sooner or later, no matter how much we seek to control the minutiae of our lives, the unexpected swirls down upon us and blows us off the path. Big time. Woosh of whatever we thought we’d never have to face sends us reeling.

And that’s when we find ourselves sprawled in the middle of the dirt with nothing but stardust in our hands, face to the sky, and a head full of questions. And not a damn soul has the answer that will satisfy us.

We only have our imaginations then. Ahh, yes, and the endless expanse of possibility. And what could be more delicious than that? 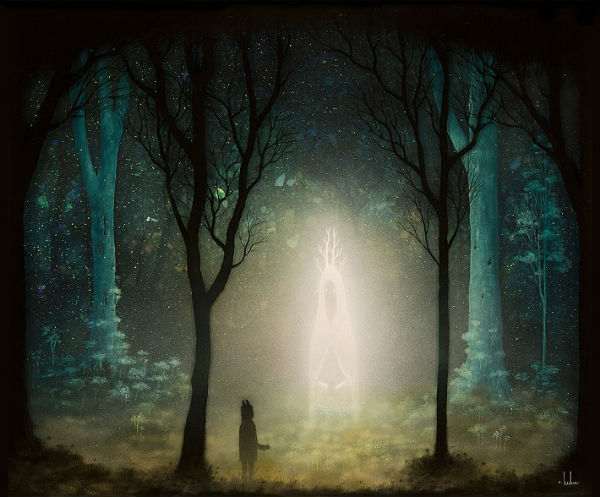 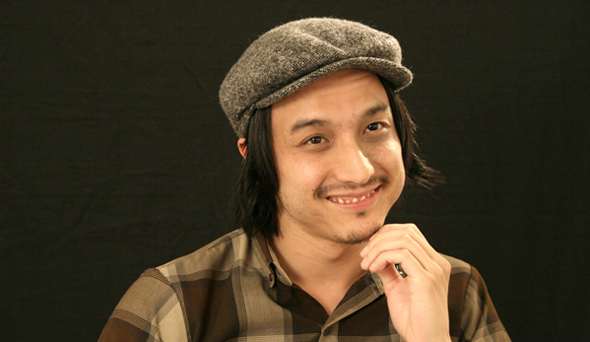 Deanna Phoenix Selene: Andy, your paintings possess a decidedly spiritual mysticism to them, but “spiritual” is such an amorphous term nowadays. What is your own description for the magic you create on these canvases? Do you feel there is a hunger for this? What is some of the feedback your work has received? 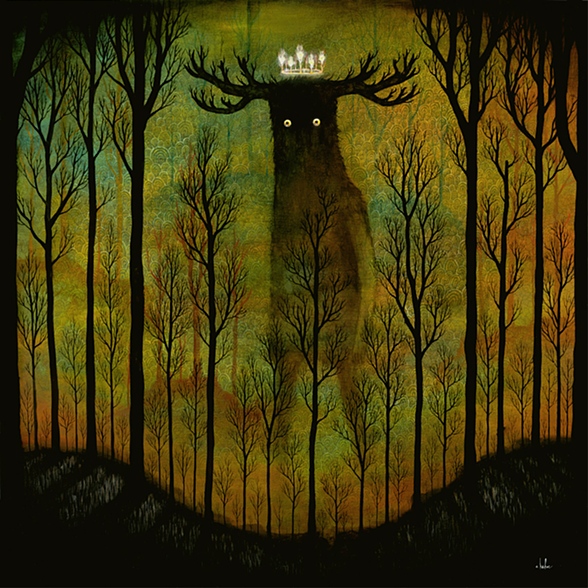 Andy Kehoe: I want to inject a bit of imagination and wonder into people lives. I’d like to offer a way to transport people to places they haven’t been before, while also stirring up something familiar and nostalgic. 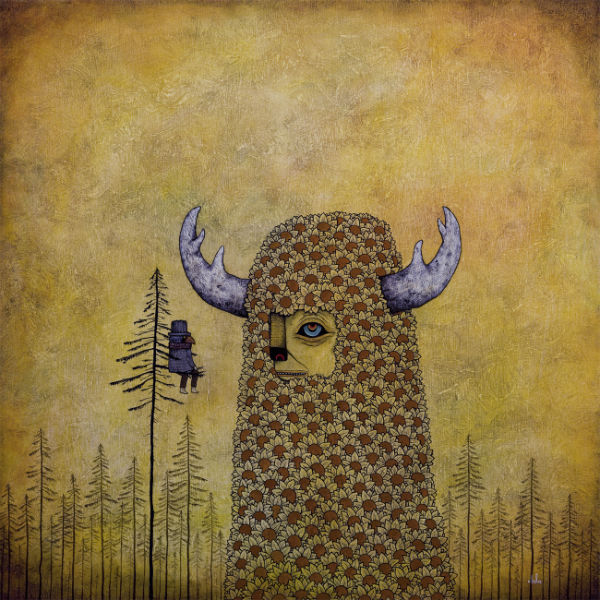 Andy Kehoe: There certainly seems to be a hunger from my audience to delve into the more mysterious and less pragmatic parts of life. Growing up in this modern age, skepticism has become part of grower older and is pretty essential to survival. But there is a part of us that wants something outside the confines of reality telling us mysteries aren’t magic and there is a logical explanation for everything. 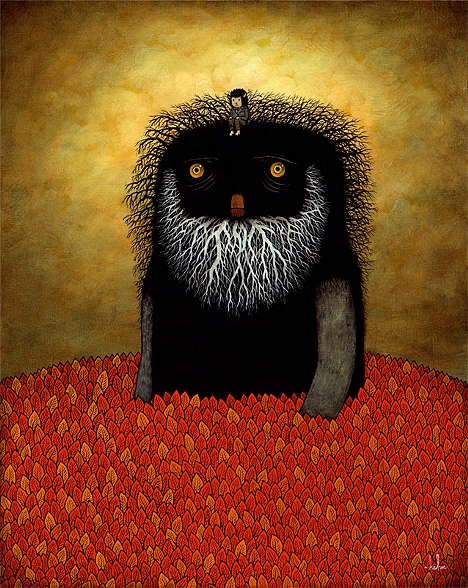 Andy Kehoe: All kinds of natural wonders make us question the world around us. How is it possible that ordinary people made the Great Pyramids and the Easter Island Heads? How is it possible for a far off nebula to be so grand in scope and infinitely large? Is it possible that ghosts, spirits and monsters actually do exist? Pondering these mysteries becomes a clashing of one’s ingrained sense of logic with the overwhelming idea of impossibility. Questions like these bring you back to a childlike sense of awe, when everything was a mystery and anything was possible. That’s what I’m trying to tap into. I’m offering a world where anything is possible and there is no doubt that magic does happen because the magic is real. All of the fables and stories you read as a kid are not only the reality, they are an everyday part of life. 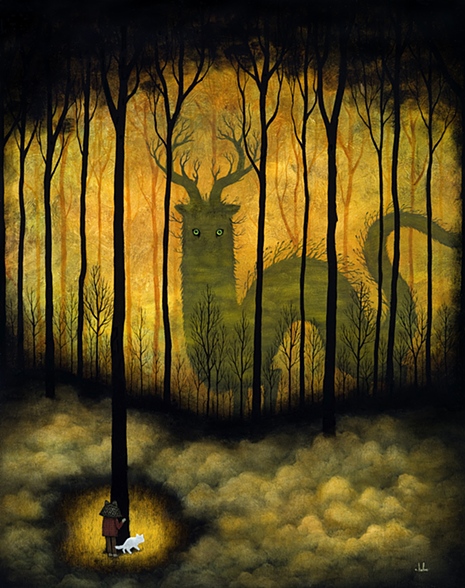 Andy Kehoe: Although I don’t think I’m personally very spiritual, I know my characters are and they have good reason to be. In my world, it is a certainty. The spirit world is real, and you never have to question it. Spirits, ghosts, ghouls, and other such creatures or beings are real. The inhabitants of the world have to interact with them. The unquestionable certainty of it is one of the things I truly love about the world in my paintings. 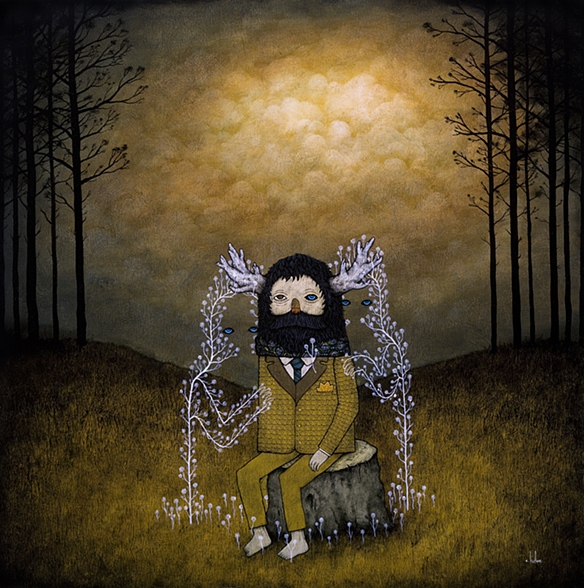 Deanna Phoenix Selene: Do you think we tend to be too quick to run away from the darkness inside of us? Do you aim to address that or at least shoot for a greater balance through the works you create? 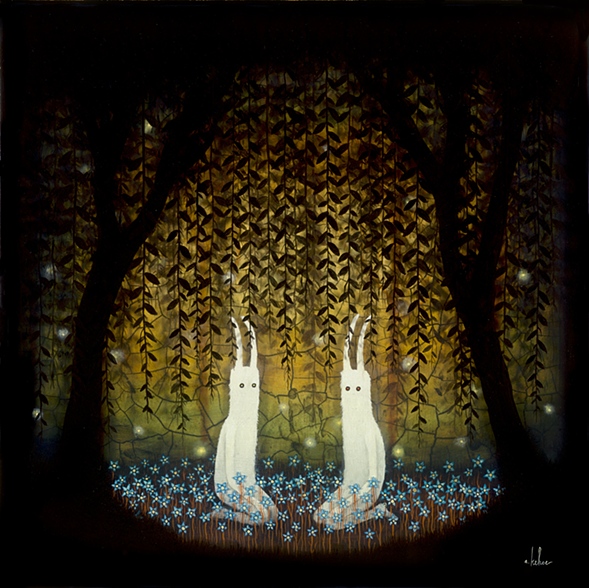 Andy Kehoe: I think there’s a lot of beauty and mystery in darkness. 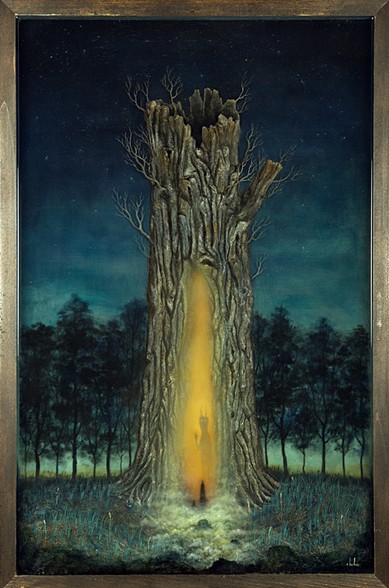 Andy Kehoe: Many of the old stories and fables that have stuck with me have an edge of darkness. Looking back on the movies I loved when I was younger; The Neverending Story, The Secret of NIMH, Fantasia, Legend, Labyrinth, Willy Wonka and The Chocolate Factory, and Gremlins all had parts that scared the bejeezus out of me. Darkness is a void that lets the mind wander, and it’s something to which humans have a deep connection. 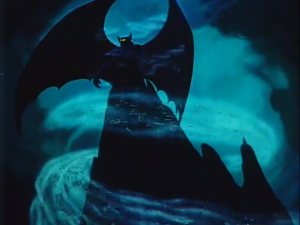 Deanna Phoenix Selene: In an interview I read earlier, you mentioned that being of mixed heritage ~ your mother is Korean and father, Irish and German ~ has had the effect psychologically of oftentimes landing you in a sort of identity limbo. Caucasians typically see you as Other, lumping you into a “general Asian” category, while Koreans may dismiss you for being not of “full-blood.” Have you found a mixed-blessing in this? That it has freed you up from the start to be an original? 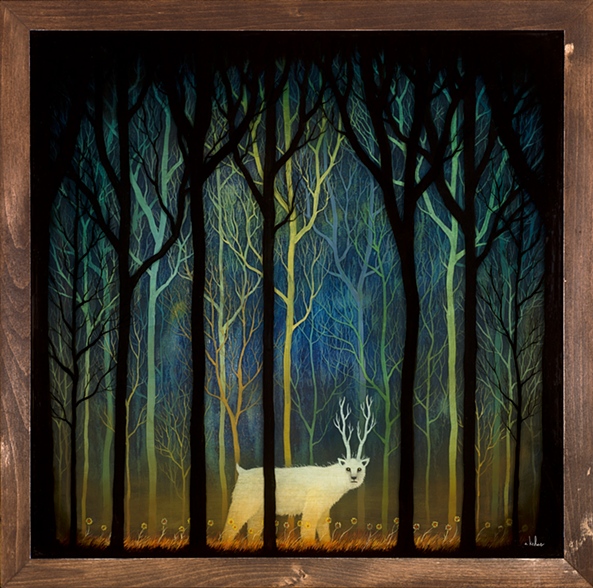 Andy Kehoe: That’s an interesting question. Growing up, I found myself relating to more counterculture things like comics and skateboarding. (Well, they used to be counterculture anyways.) When I was younger it could be pretty tough at times, only because being different in any way is just an open invitation to ridicule. Later, it was made even more difficult as most American folk think I am fully Asian and some Korean folk laugh when I tell them I am Korean. A lot of Korean people think I’m Polynesian or Hispanic. Like you said, “identity limbo.” I made friends with other “outsiders” in these smaller circles. I guess the fringes are where I felt most comfortable. 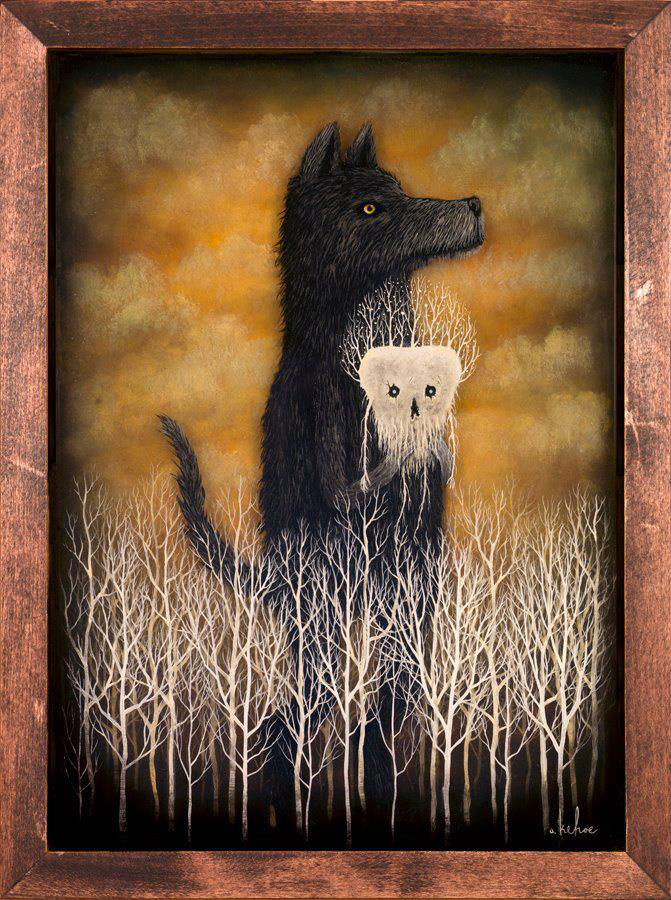 Call Forth the Seed of Winter | Andy Kehoe

Andy Kehoe: Maybe being innately “different” makes one think differently and, ultimately, one becomes more unique or creative. Like I said, it’s a really interesting thing to think about, and I’ve never thought about it that way. You just might’ve rocked my mind. Come to think of it, I know decent amount of other mixed-race artists as well. Maybe you’re onto something here. 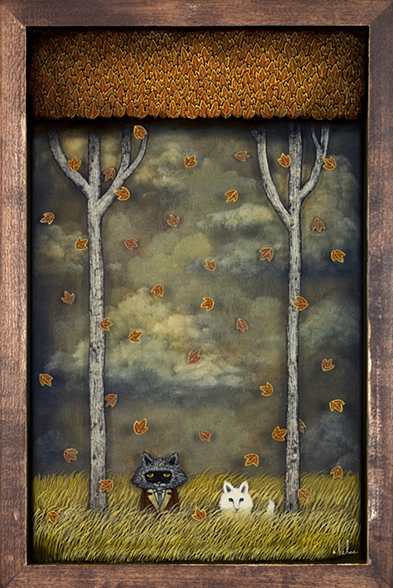 Deanna Phoenix Selene: Growing up, you were a very contemplative, imaginative child, yes? More comfortable wandering on your own amongst the trees and resident owls than hanging out with the more boisterous crowd? 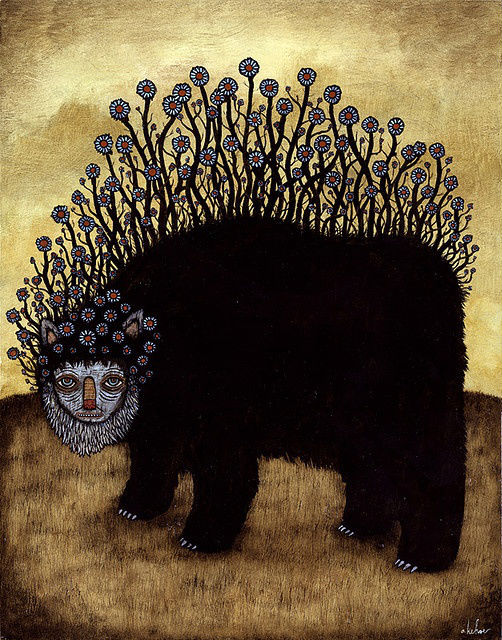 Andy Kehoe: I am a twin, so luckily I never had to be alone in the world. My brother Ben and I joined forces and tackled childhood together, though I would say we were on the reserved and introverted side. We spent a lot of our time together running through the woods, swimming in streams, and engaging in imaginary battles. We had no trouble losing ourselves inside our huge imaginations.

Deanna Phoenix Selene: Who were your favorite boyhood heroes? What stories or folklore captured your imagination? Favorite illustrators?

Andy Kehoe: My first childhood heroes were all fictional characters like Luke Skywalker and Indiana Jones. Mario Lemieux was also a hero in the sports realm.

There were children’s book illustrators who certainly inspired me. I just lost myself in the worlds they created. When I was younger, I read a ton of fairy tales, fables and children stories. Ben and I had a Fisher Price tape player. We would spend hours listening to stories and looking at illustrations and drawing. Those stories really had an effect on me and the sense of wonder they brought to us has continued to resonate in my mind.

The first artists I really remember holding in high regard were comic book artists. Around the age of twelve, my mind was completely blown by the Akira comics. The amount of detail in every panel was astonishing, and I’d never seen anything like that in comics or any other medium. 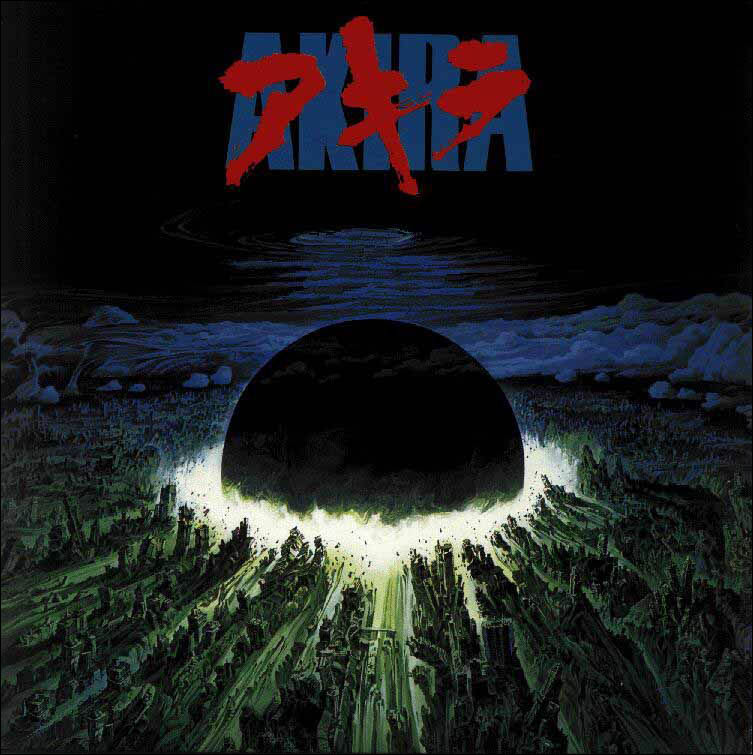 Andy Kehoe: Prior to that, I was reading Superman and Conan, so seeing a comic not loaded with ripped superheroes was also a revelation. Katsuhiro Otomo was definitely a hero to me. In my teenager years, I got really into Todd McFarlane and Jim Lee comics, as well as the Eastman and Laird Teenage Mutant Ninja Turtle comics. To this day, I can still draw a decent Ninja Turtle.

Deanna Phoenix Selene: At what point did you know you wanted to be an artist? Did you attend art school or are you primarily self-taught?

Andy Kehoe: Art has always been a part of my life. As far back as I can remember, I was doodling in some form. First, I was really into cartoons. Later, that progressed into comics and video games. There was a time when I really wanted to do computer programming for video games. Programming never came naturally to me. My junior year of high school, I decided to really pursue art and to go to art school. I started out in animation, but I was horrible at it and way too impatient. I decided I’d rather spend a lot of time on one drawing instead of making a bunch of little drawings, and I moved on to illustration. Along the way, I switched to digital multimedia for a bit but, in the end, I went back to illustration. Even after graduating with a degree in illustration, I ditched the illustration world to show my work in galleries. I enjoyed the challenge of illustration, but I never really found my voice or the ability to really express myself until I started making work for gallery shows. It takes a while to find out what you’re really passionate about, and what you’re really made to create.

Deanna Phoenix Selene: How important is silence? For an artist? Is there ever a danger of an artist becoming too isolated?

Andy Kehoe: I’ve had points in my life when I was certainly too isolated. When I first moved to Portland [Oregon] I was living alone and working out of my apartment. There were long stretches when the only people I interacted with were people that were making food or coffee. 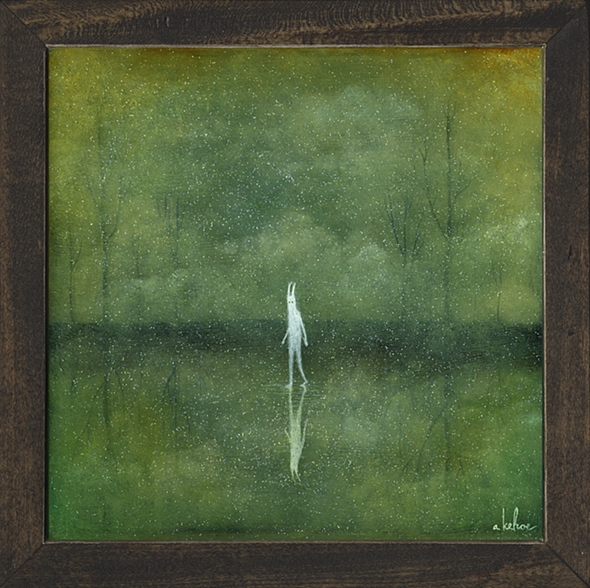 Andy Kehoe: It definitely started to wear on me. Eventually I moved into a studio with another Portland artist, Evan B. Harris, and the experience became way better for me. It’s great to have someone to chat with and to get some feedback about your work. I work at home alone these days, but I have a wonderful wife to keep me company.

That being said, there are times where isolation has served me well. I’ve had some great moments sitting out in a barren field and just soaking in the world around me. There is certainly a theme of isolation in my work, and it all harkens back to that feeling of stepping out of the madness modern life brings and being at peace in the silence.