he first thing that hits you when you step inside the home of illustrator Nicole Rubel is the saturation of color. Walls painted in the same intense hues of her Florida childhood: bubble-gum pink alongside lime green, turquoise and lavender. 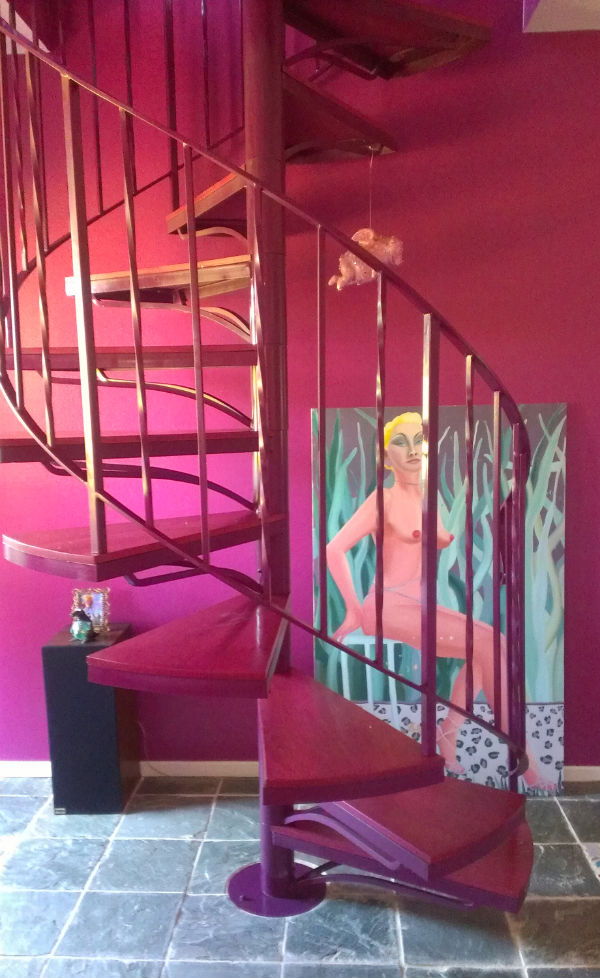 And on those walls: Rubel’s art, equally bright and fanciful, and yes, in-your-face cheeky.

Nevermind that Nicole’s home is not situated in sunny Florida, but rather in rural Oregon just outside Portland. Farm country. To visit her, one must drive through miles and miles of browns and subtle greens. A town founded as a religious commune and named after the daughter of the doctor who established it. A population even today of just over 900.

Nicole Rubel’s view from her back porch. Extending beyond this lake is property which she shares with her psychotherapist husband, Richard, as well as 2 horses, 2 goats, a sheep and her dog, Fang. 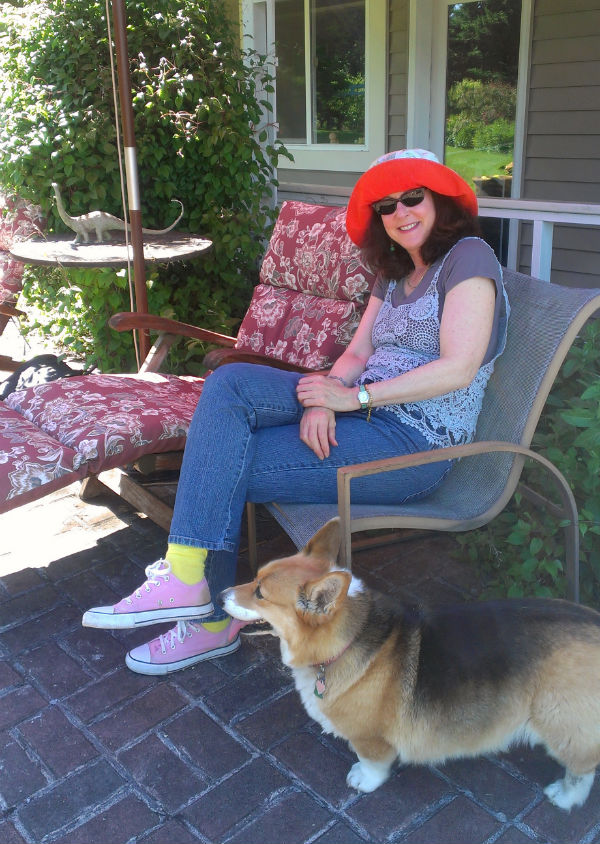 Deanna Phoenix Selene: You’ve mentioned you’re a fan of Matisse. What is it about his style that speaks to you most deeply? 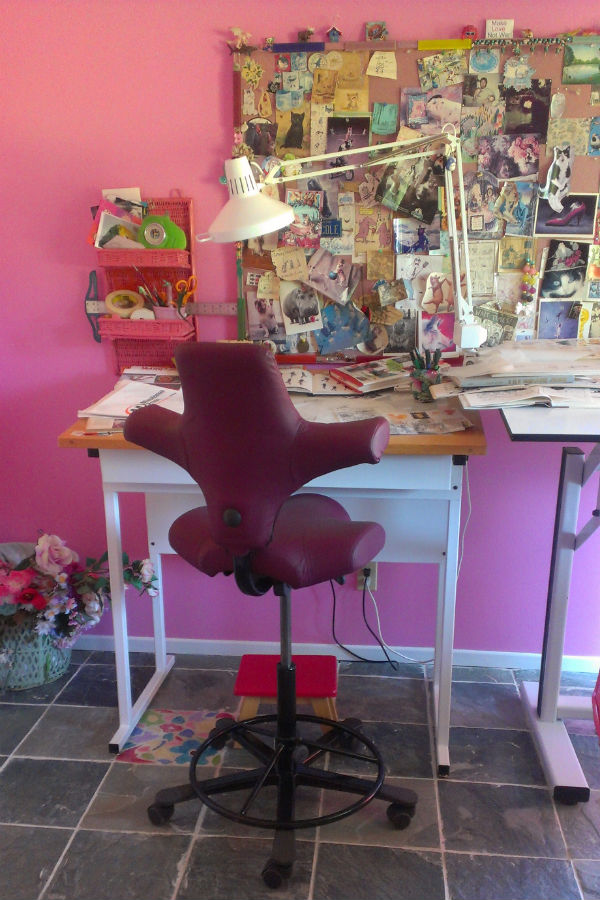 Deanna Phoenix Selene: I imagine that for you, hiking through a place like Tryon Creek Park probably wouldn’t be deeply stimulating. You’d feel suffocated with that monochromatic palette? Too much green?

Nicole Rubel: Yes, a bit. I can’t even explain it. I tell you, just looking at the color pink will do it for me.[quote] I eat color. It’s life. It’s everything. I don’t know why people live in such drab worlds. [/quote]Each shade–I’m looking at the Delphinium here, and it’s the most amazing shade of purple blue! It’s not purple and it’s not blue. Very hard to reproduce. But I could try!

Deanna Phoenix Selene: Have you always been this responsive to color?

Nicole Rubel: I guess so. I never knew I was different from any other kids. [quote]I wasn’t considered creative growing up. My father was not particularly enamored with my artwork.[/quote]

I remember there was a drawing I did when I was in the second grade. It was one of my typical strange hands; I had it in my sketchbook. One day I got up the nerve to show it to him.

He drew a realistic hand next to my strange hand, then wrote beside it: “This is how a hand should look.”

He was trying to be helpful. He tried to set me straight all the way through my childhood and let me know that my older sister was extremely talented. My parents both assumed she would be a successful artist some day. She drew realistic renderings of horses and things. The typical artistic renderings that you see kids do in art class. And I was certainly not one of those kids. I remember once I was drawing a Halloween picture, and my art teacher came up to me and said, “The sky is not purple, and pumpkins do not fly through the air.” I wasn’t good at anything. anything. and my parents let me know. Nothing. Not one subject. I was as mediocre as you can get. 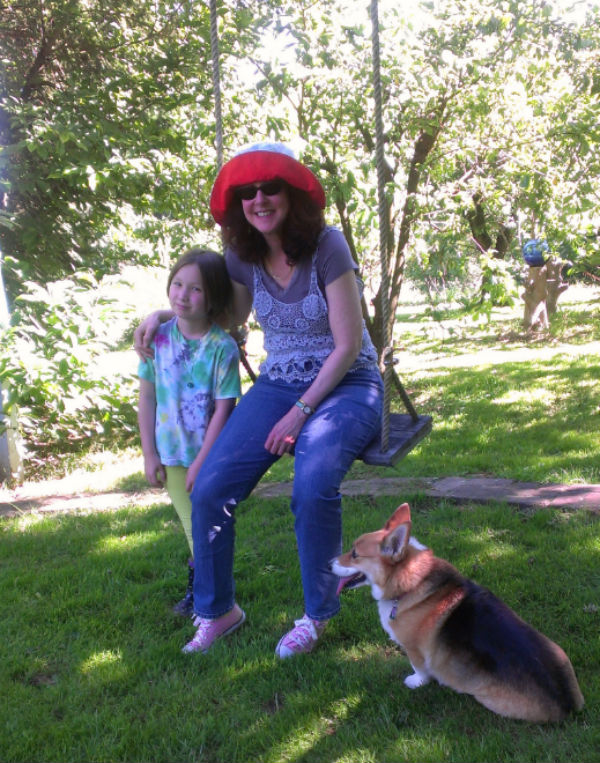 Nicole Rubel with Deanna’s daughter, Faith, who during our visit encountered all sorts of garden delights, among them, a rather laid-back and well-fed, large gray snake.

Deanna Phoenix Selene: So flash forward then to the present. When did you consider yourself a real artist? When did you feel you had finally arrived?

Nicole Rubel: After I published my [children’s] novel, It’s Hot and Cold in Miami.

Deanna Phoenix Selene: That was just a few years ago. I’ve known you for nearly twenty years as a successful children’s author and illustrator. Invited you to come do programs for my library when I was a librarian. Are you going to tell me now that you didn’t see yourself as a success even then?

Nicole Rubel: No. I didn’t.

Deanna Phoenix Selene: You are an identical twin, yes? You’ve written a couple of children’s books about the experience of being a twin, and you shared in your website bio that growing up, your twin spoke for you. In what shape did this take? Where is your twin living now?

Nicole Rubel: She’s still in Florida. An importer. Took over our father’s business. I design handbags for her company. So technically, I work for her. My twin wasn’t perfect, but definitely bright and made good grades and was the apple of my dad’s eye. They both liked similar things. She became a debater in high school and ended up working for him professionally. They had similar minds. Yes, she spoke for me. I have to be very careful because I can revert right back and let others speak for me even still.

Deanna Phoenix Selene: She’d make decisions for the both of you and you’d just go along?

Nicole Rubel: She would speak and I agreed. Or I argued quietly somewhere else once I was alone with her. Or I’d whisper my objections in her ear. It’s actually not that uncommon in twins. It’s sad, but no at all uncommon.

Deanna Phoenix Selene: So how did you move from being that girl to the woman you are today?

Nicole Rubel: I didn’t get into my sister’s college. So I applied to the college closest, and I went through a whole year without her; and it was misery. But that was when I started to grow up. On my own, I had no choice. I had to speak, and I had to make decisions, and one decision I made was to apply to the Boston Museum School [associated with Tufts University]. I didn’t have much of a portfolio, but I had done a mural on my bedroom wall at home, and so I sent them a photograph of it. And they wrote back and said, “We like your daughter’s painting. We do think she needs to work on her math though.” So when I transferred to Tuft’s, my dad and I made a deal. He didn’t want me to go to art school, but if I was determined, then I would have to agree to earn an art education degree, so I could make a living afterwards teaching. He always cared. He just didn’t understand me.

Deanna Phoenix Selene: So how did you get into illustrating children’s picture books?

Nicole Rubel: I had always intended on becoming a traditional painter, you know, a “serious artist.” I thought doing children’s books was beneath me. But for the last meeting of my final class, my Museum School teacher said to me, “Your assignment is to go to a bookstore and visit the children’s books section.” Well I was insulted! But I did as I was told, and when I walked over to the picture books section, as soon as I saw James Marshall’s George and Martha books, l knew exactly what I wanted to do for the rest of my life.

Deanna Phoenix Selene: Your Rotten Ralph books have been quite successful and long-running and were even made into an animated television series which aired on the Fox Family channel. How did you meet Jack Gantos, your collaborator for the RR books?

Nicole Rubel: I met Jack at a Halloween party. I was dressed as Alice in Wonderland, and he was dressed as The White Rabbit; and we became a couple for six years. We’re still friends. We collaborate on everything.

Deanna Phoenix Selene: And how did the concept of the Rotten Ralph character come about?

Nicole Rubel: I had a portfolio I was putting together for Hallmark cards, and in it I had artwork about a girl and her cat. Jack was a writer. I was doing a series of drawings for children’s books without words. Jack thought he would gives these books words. I showed my portfolio to the Houghton Mifflin Company and Little, Brown; and the editor said, “I don’t like your book, but I do like this girl and her cat. Can you guys go home and write a story about them? And we were very inspired, because we had a rotten cat at home. And the first book was really terrific and got published.

Deanna Phoenix Selene: How did you get the courage to approach the publishers like that?

Nicole Rubel: That’s interesting, isn’t it? Sometimes I’m too afraid to pick up a phone and yet for some reason I was able to that. I know there’s something in me. And I’ve managed to last this long in an impossible industry. It takes tremendous fortitude.

Deanna Phoenix Selene: And how is your relationship with your sister now?

Nicole Rubel: We’re very close. We talk every day. She’s very proud of me. No one’s speaking for me anymore, that’s for sure. I recognize I am different from other people, and there are times that I wish that wasn’t true, but it is what it is, and it’s not going to change. 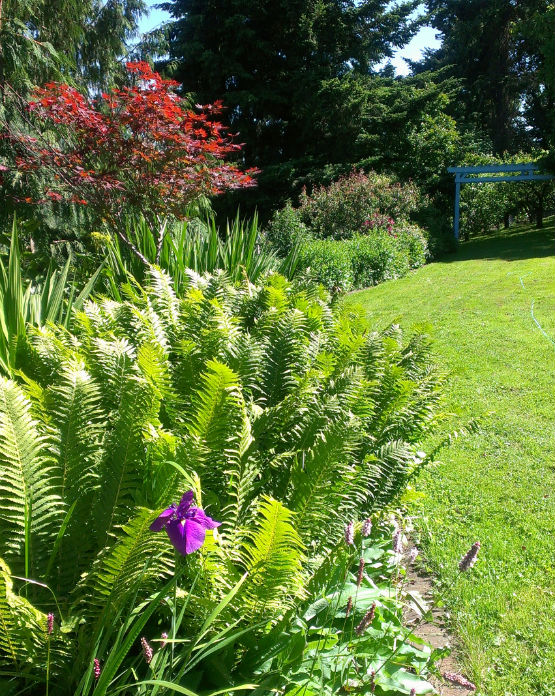 Further notes: Nicole Rubel is an author/illustrator known for her uniquely colorful illustrations and charming stories. She has over 60 books to her credit and is the co-creator of the popular Rotten Ralph series. Visit her website at: nicolerubel.com