orget for a moment that his work has been recommended by none other than The Vatican. We don’t need any authority to tell us that Ian Thomson knows his way around a fine slab of marble. But what happens when we walk our imaginations along the contours of one of Ian Thompson’s creamy sculptures is not entirely cerebral. No, when it comes to art in the abstract, there’s something else involved… 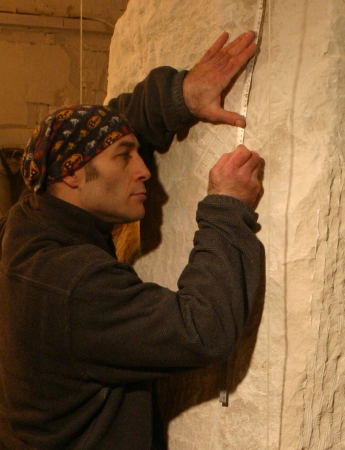 Deanna Phoenix Selene: One of the qualities that sets sculpture apart from most other art forms is that it can be experienced not only through one’s imagination, but also very directly, by way of touch. As so much of our day-to-day interaction with one another is becoming increasingly removed, how important is this extra layer of connection that sculpture provides?

Ian Thomson: For me, the power of sculpture is evident the instant I see it. I feel a connection with it long before I might be able to touch it. We live in a three dimensional world; light, shadow and bifocal vision tells us that something is big, heavy and real.

I avoid the virtual world as much as I can (I have neither broadband nor a television) it is merely a tool of limited use, like a chisel. For example, in carving a statue, I wouldn’t dream of constantly using a 3mm flat, as useful as it is for certain specific tasks.

Deanna Phoenix Selene: You have said that when we look at an abstract sculpture, “it is not so important to know what it is that we are looking at, but to feel what it does to us.” When was the first time you yourself recognized the powerful effect of shape, line and texture on your own psyche? Was it a sculpture you encountered one day in a museum? Or something that enraptured you in nature? The body of a lover? What was the starting point that began your aesthetic conversation? 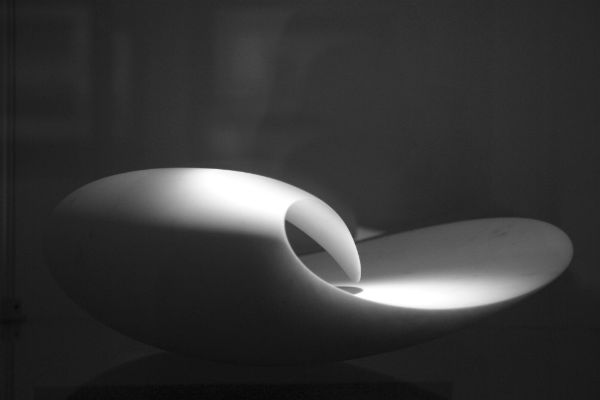 Ian Thomson: Starting at an age before I can even remember, my mother, an Italian artist of note who has exhibited in the Venice, Biennale, took me to see much artwork in Italian cities and also in London. I can recall as a child of perhaps eight years, seeing the Tutankhamen exhibition in London, and that memory of the king’s magnificent gold mask has remained with me, as has the power of Egyptian sculpture. 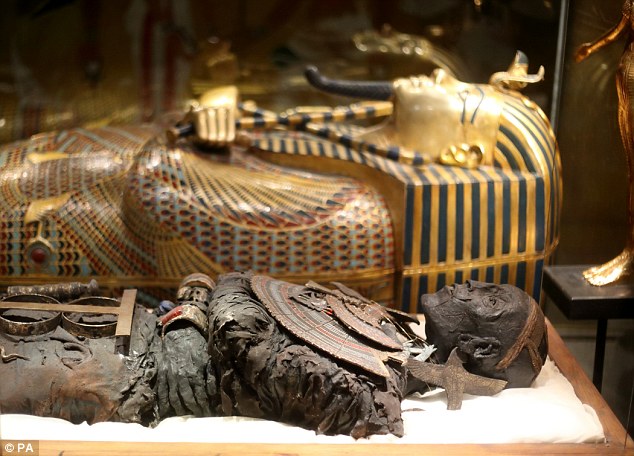 Ian Thomson: Whilst touring Europe by train as a youth, I was at one point traveling alone and came across the Bruges Madonna by Michelangelo, quite by accident. My heart leaped as if I had bumped into a dear friend. I gazed at it a long time, infatuated. I remember being very reluctant to leave the church. 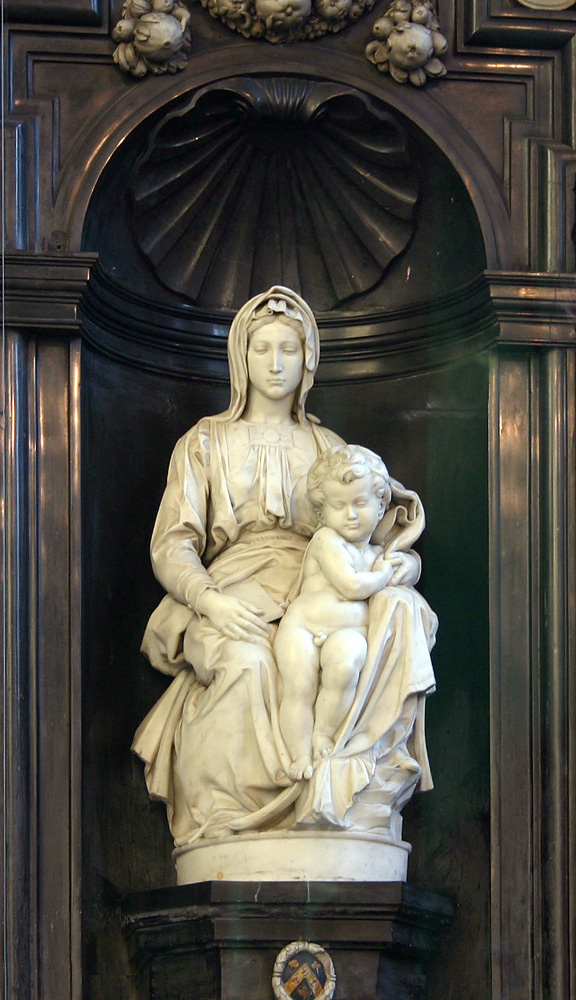 Deanna Phoenix Selene: Can you share a bit about what goes through your mind as you sculpt? Since your mediums ~ marble, Portland Stone, etc ~ are so expensive, and finding just the right block a quest in itself, I imagine you already have a very clear vision of the end product in your mind as you begin? Or does the work whisper to you as you go along?

What goes on in my mind as I sculpt? I think one can describe the mind as being in a state of attention and of willingness. It is similar to when a martial artist, during combat, wills a foot or fist to strike his opponent. He doesn’t think consciously about punching or kicking. By staying focused, it just happens.

Similarly an accomplished sculptor wills his tools. It is an infinitely subtle action. The movement of the chisel or angle grinder is automatic, it has been repeated thousands of times. One just “tunes in” to the marble.

White marble is a beautiful medium. Each type has its own characteristics and each block is different. One must become incredibly sensitive to it, constantly adapting to it, minutely varying the angle or the pressure of the tool, since in some places it is harder while in other areas softer, and sometimes the bed (grain) lies this way or that.

When on those special occasions one is “in the zone,” as with any other art, one seems to be on rails, one cannot go wrong, one sees really clearly and it is as if a higher power is acting and one is just the vessel. The ancients described it as the divine inspiration of the muses. 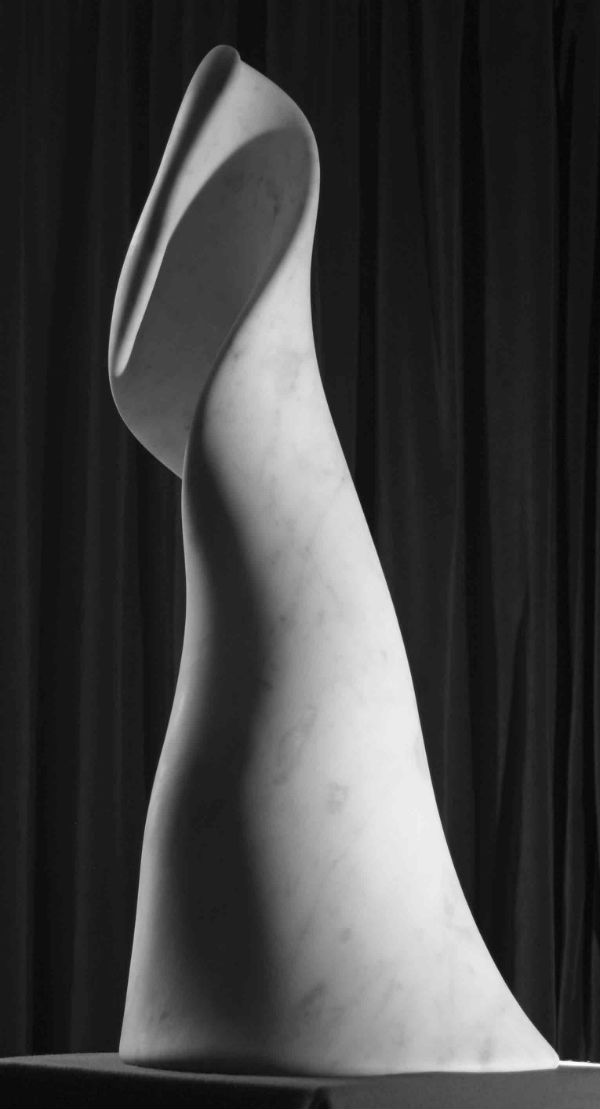 Ian Thomson: When I work, I know exactly, down to almost the last detail, what I am going to do. I have, from experience, found that I get better and quicker results that way. Extra time spent on the maquette, saves time carving. Not all sculptors work this way.

Deanna Phoenix Selene: What is the most satisfying aspect of your work? The stage you find most rewarding?

Ian Thomson: The beginning of the design stage where I make drawings and clay sketches can be as frustrating as it is satisfying, to the extent of being almost painful, When I know, however, that I’m onto something good, it is immensely satisfying and I will often then be shaping clay late into the night.

Attacking the raw marble block with large power tools and filling a wheelbarrow with 100 kilograms of marble off-cuts per day and going home very tired, is also satisfying. So is delicately finishing the sculpture with tools such as a dentist would use, such as Fixodent, and seeing it come to life.

Deanna Phoenix Selene: What has been your most rewarding piece? The dearest feedback?

Ian Thomson: It is very difficult to decide which sculpture has been the most rewarding. I feel rewarded when I perceive that what I am doing is good. All my sculptures have their own characters, virtues, deficiencies and highlights in their creation, even the early ones that are less mature. And anyway, to borrow Michelangelo’s phrase, I am wedded to my art and my sculptures are my offspring (I have no wife or children) and it would be wrong to have favorites

Deanna Phoenix Selene: You have written about Soren Kierkegaard’s triskelion of “Freedom, Fear and Faith” and how you have noticed a similar structure throughout time and across the globe. What is it about triads? About the magic of three?

Ian Thomson: We are pattern-makers. Mathematics is a language. Therefore, every number has meaning. The fact that the number three has meaning and that it is powerful (or magic) is not in itself significant, since all the numbers between one and five are powerful. Meaning is specific to individuals, families and societies. I don’t know how widespread its magic is, I’m no expert on the subject, but I can offer a few random reasons as to why triads are important.

In solid forms, the triangle, or pyramid, denotes stability and permanence. The triangle is hugely important in science, for example, trigonometry ~ measurement by three points ~ has enabled us to map the stars and navigate the globe (and to scale up sculptures). [quote]When we are born, we look up at our mothers and travel her features from eye to eye to mouth and back again, a habit we continue with, on all other humans for the rest of our lives. Three is how a family is born. Three has a natural rhythm when we strike hammer on chisel and when we are dancing a waltz. It feels good. Three has a certainty. [/quote]I am told that in some Greek Orthodox Church ceremonies, everything is repeated three times, because of the principle that saying something once might be an error, a second time a coincidence, but on the third time a certainty.

Finally, of course, three has spiritual significance. For example, in a broad sense: mind, body, spirit; in a specific sense: Kierkegaard’s freedom, dread, faith; and in a traditional sense: The Holy Trinity.

Deanna Phoenix Selene: What is your own working definition of “spiritual”? 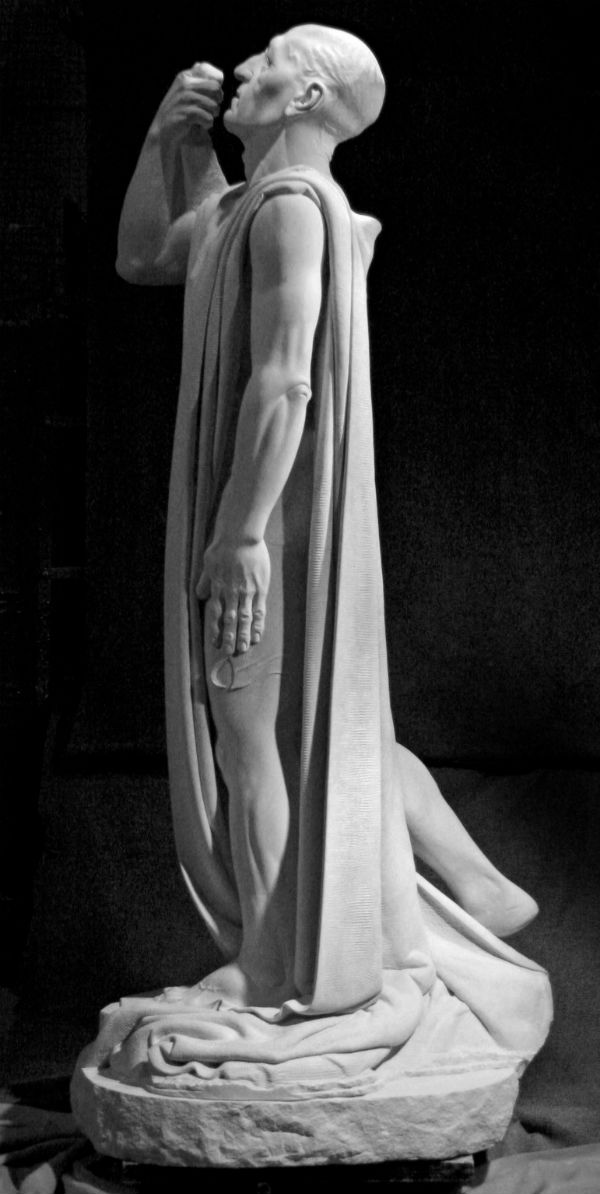 Ian Thomson: My working definition of spiritual is: having a sense of goodness. If I say to you, “Show me goodness, where is it? Let me touch it,” you will not be able to do so. We both know for certain, however, that it exists. Therefore, it is the perception of things unseen. Spirituality in a more narrow sense involves the will, namely, seeking that unseen thing.

Yet the will is limited since to perceive goodness there must be surrender. And if you define “goodness” as God, Love, Truth, Peace or Beauty, then that is alright, I don’t make much distinction between these terms.

Deanna Phoenix Selene: Would you describe yourself as an optimist? Would you say you have faith that humankind is moving in the right direction?

Ian Thomson: Yes, I would say that in my personal life I’m an optimist, but that no, human kind is not moving in the right direction.

However, that does depend upon your definition of “right.” If by “right,” you mean a direction where humankind would avoid the most amount of suffering, globally, then I believe that our current direction, motivated by selfishness, is not the right one. If, on the other hand, one has an eschatological outlook, then you could say that the widespread harm we are doing to ourselves and to others today, and the mass suffering we are likely to cause future generations, are the necessary stages towards achieving an ideal world and a loving humanity.

Deanna Phoenix Selene: If you could pass on one bit of advice?

Ian Thomson: Kierkegaard said that when one perceives that one does actually have complete freedom of action, one experiences great dread. The only way out is a leap of faith. The only object of faith is the absurd.

Before turning full time to sculpture, Mr. Thomson, who boasts degrees in both architecture and philosophy, worked a number of years in Africa and Asia on development projects as an architect. His travels have provided him with inspiration for his work.

To view more of Thomson’s work, including his figurative pieces, you’re invited to visit his website. 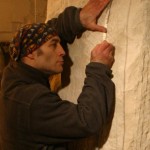