Home » Artists » Figurative painter » Francoise de Felice, France: “My mother and the difficult relationship I had with her are what guide my work” 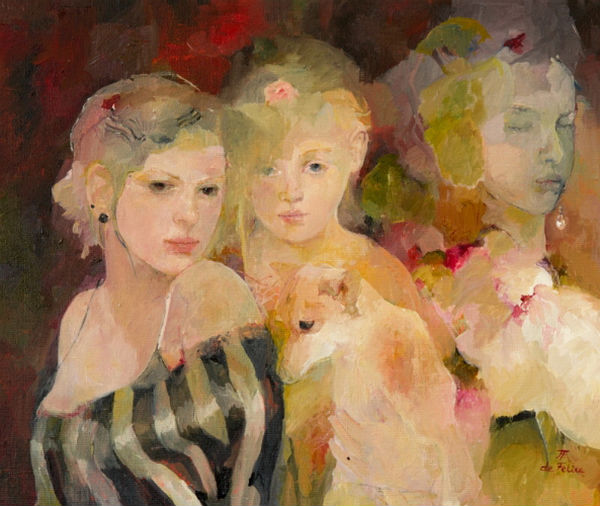 Deanna Phoenix Selene: As delicate and beautiful as your paintings are, Francoise, still, there is something that haunts about your work. Perhaps this is their ethereal quality, as they appear almost ghostly. 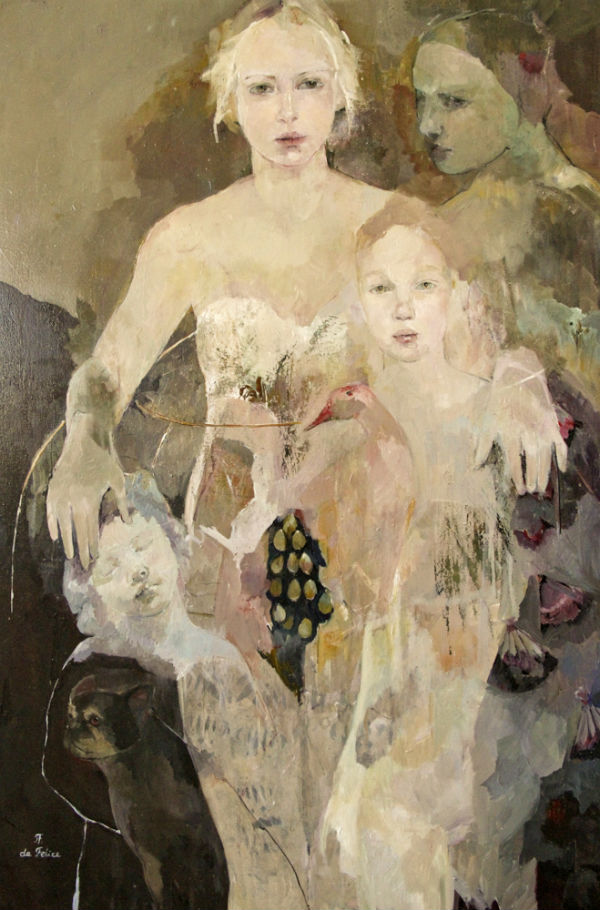 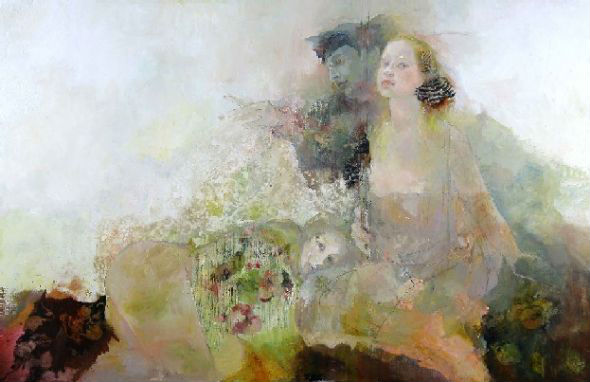 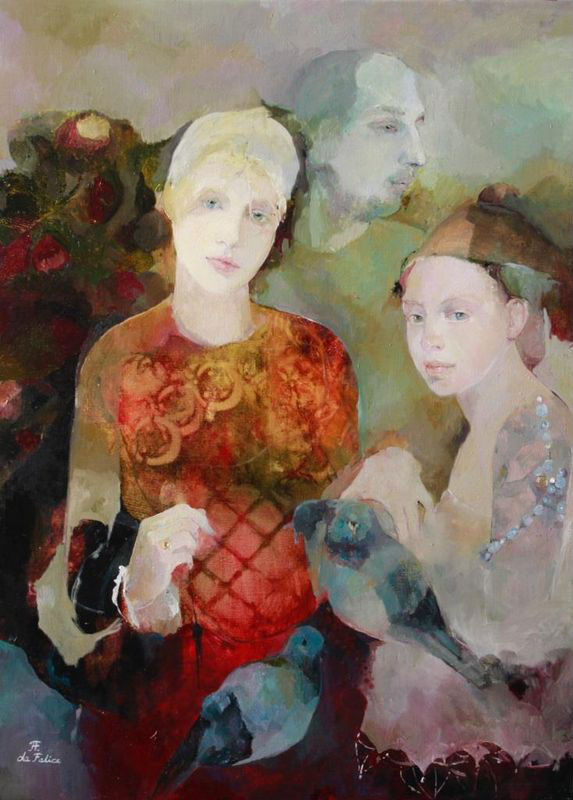 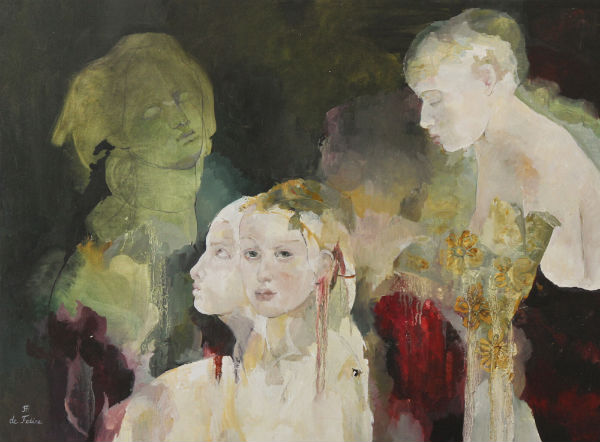 Deanna Phoenix Selene: But I also feel it’s something else as well, for even when the women are placed close to one another, sometimes overlapping, still, there is this unsettling feeling that they really do not really see each other. Loneliness even when in the presence of others. 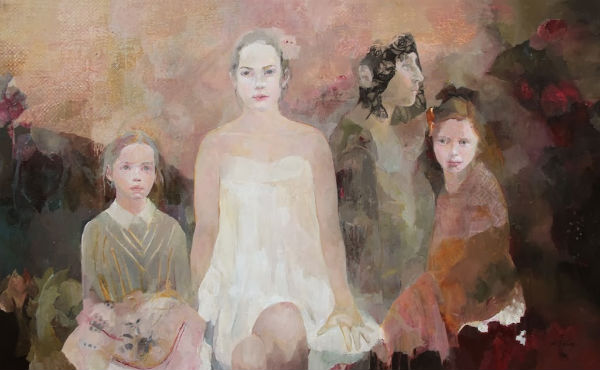 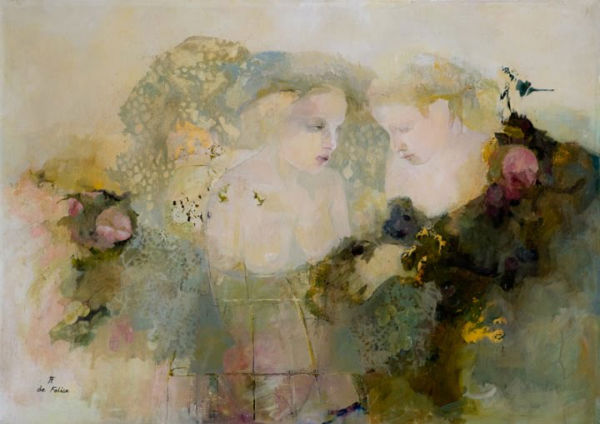 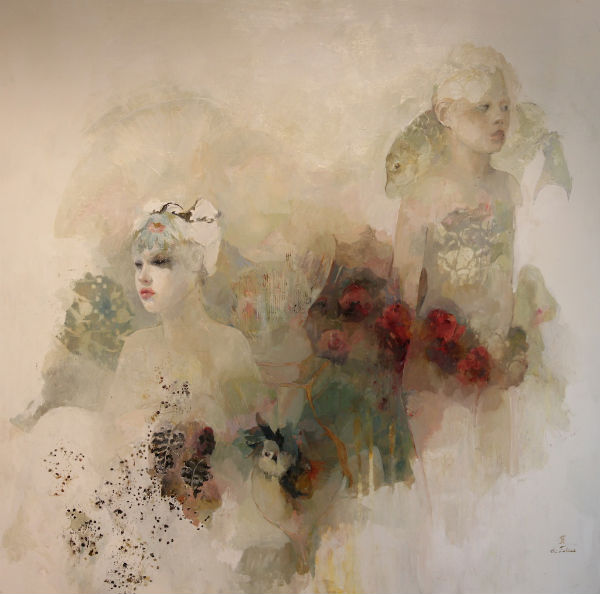 Francoise de Felice: [quote]My canvas portrays the different faces of the same woman. Fairy and witch are juxtaposed, there’s a duel. I use women as a springboard to show that internal struggle within all of us, wrestling with feelings of happiness and yet unhappiness. [/quote] 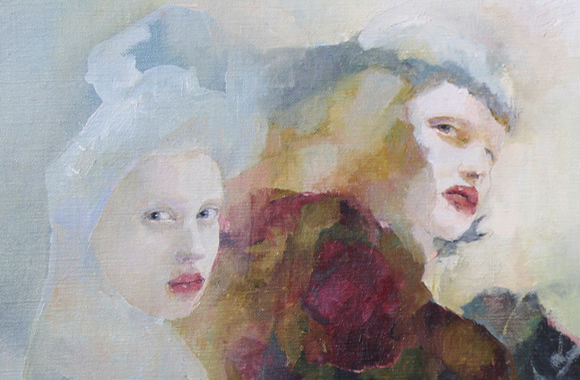 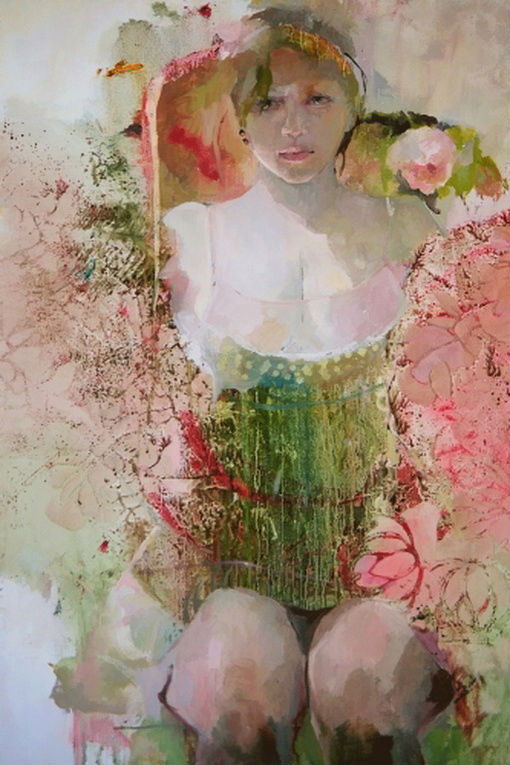 Francoise de Felice: We all are interpreters, and yet it’s difficult to translate one’s own feelings. That’s probably why it takes a whole life to know yourself, and it’s often only once you’re not far from your death that you feel ready to start over again, but in a better way. 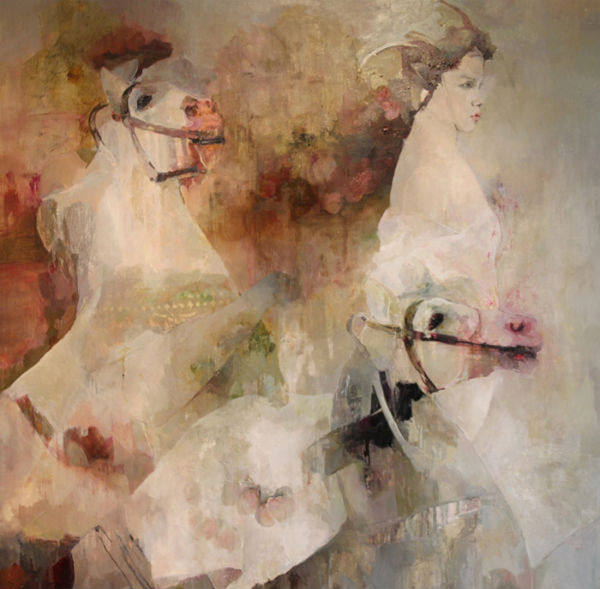 Francoise de Felice: Most of the time, I paint without thinking. It’s only once the work on canvas is done that I discover a part of myself. 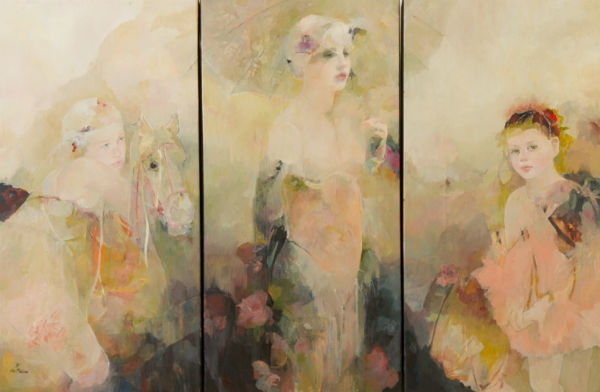 Deanna Phoenix Selene: Do you have a favorite French fairytale?

Francoise de Felice: I really like Beauty and the Beast. 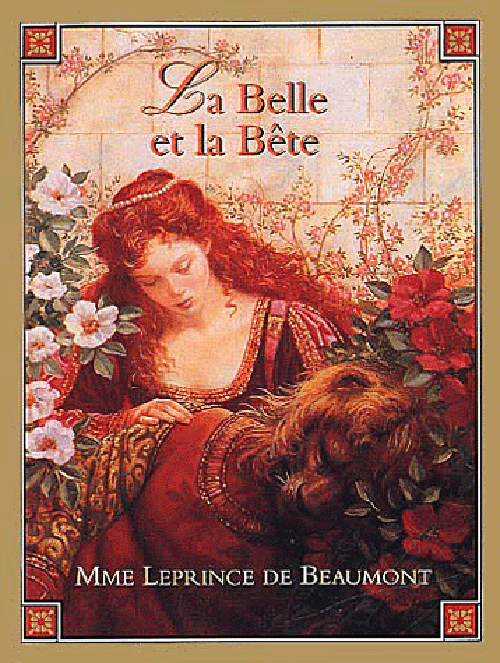 Francoise de Felice: Long time ago, I had the chance to enjoy a Slav performance which represented the beast as a huge black bird of prey, as the action was taking place in the snow. It was a pure marvel. 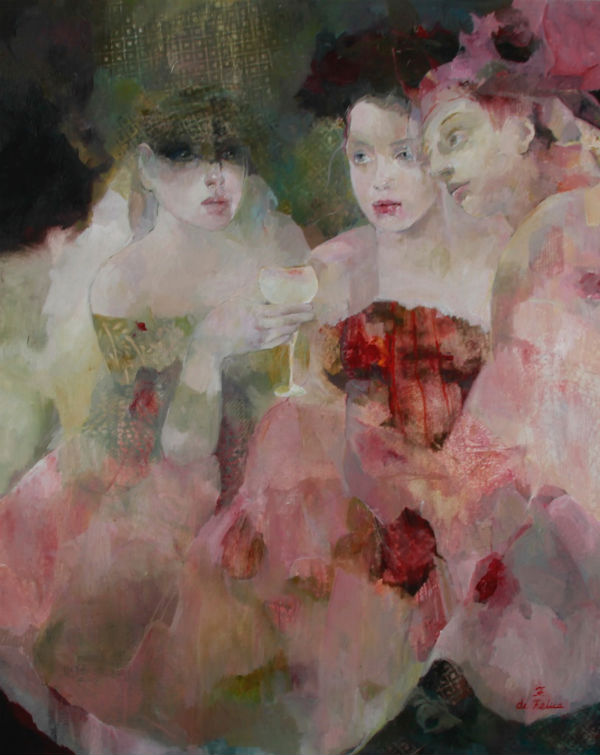 Francoise de Felice: There are many roses in my work, they are full of meanings for me.

Deanna Phoenix Selene: Who have been the most significant women in your life? Are there aspects of them here in your paintings? Or do you prefer to travel to a realm as far away from your real world as possible?

Francoise de Felice: There are a lot of women I admire, like the french singer, Barbara, whom I used to listen to during my teenage years…Or Marguerite Yourcenar. 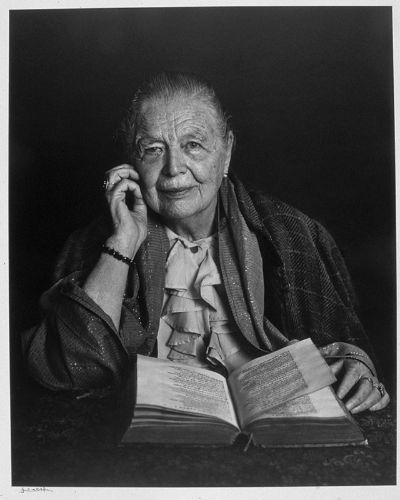 Francoise de Felice: But they don’t appear in my paintings. My mother and the difficult relationship I had with her are what guide my works. I paint teenagers with painful looks, infants full of unhappiness who didn’t manage to find their own places in life.

Francoise de Felice: A bit like “Las meninas” of Vélasquez. 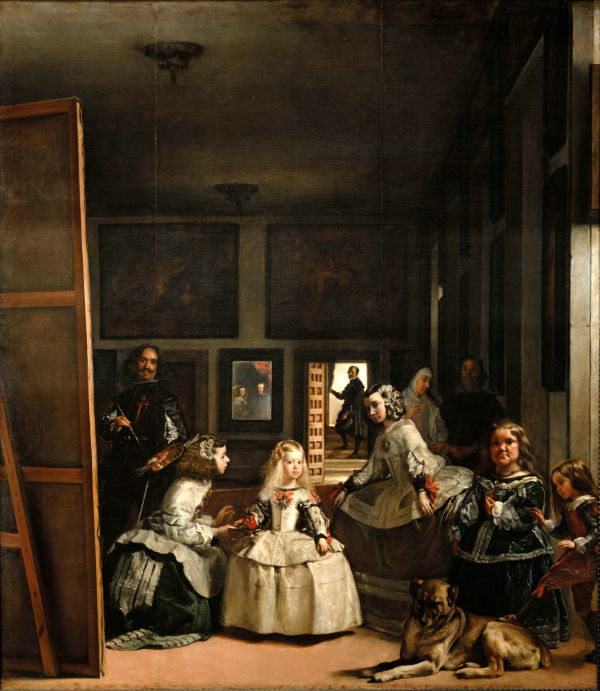 Deanna Phoenix Selene: How does imagination work for you?

Francoise de Felice: Being imaginative is being able to detect some poetry in a simple movement. A picture can appear very common and empty to some people, but like a spring of creativity for others. Even myself, I can miss out on a goldmine, and then the day after, be surrounded by wonderful vision.

Imagination is the skill of pulling out the soul of what’s around you. 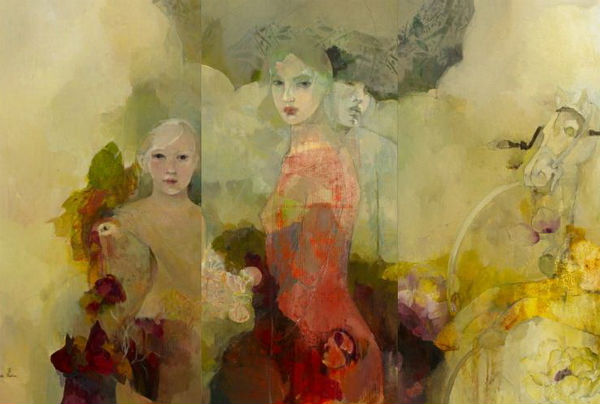 Francoise de Felice: Resiliency, It gives you the strength of living even with injuries. 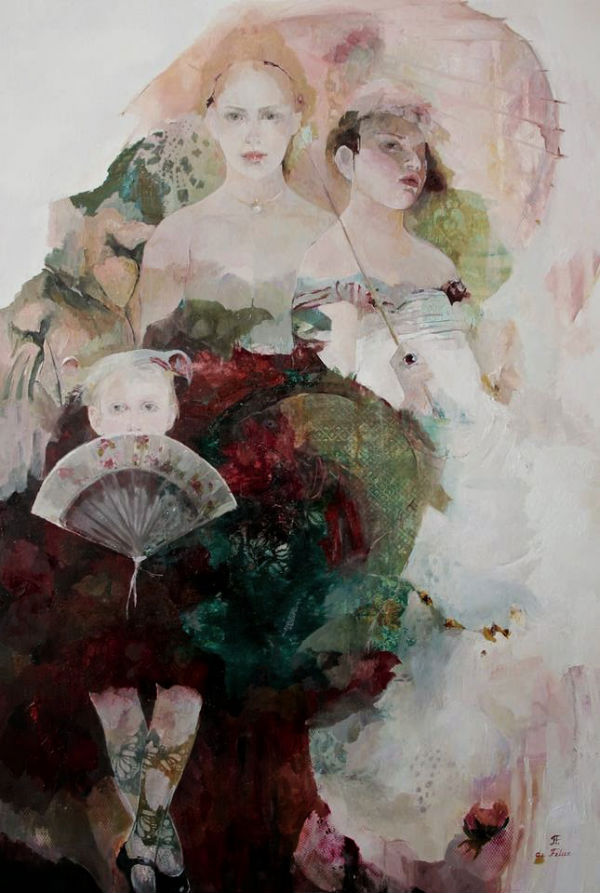