“If we do not permit the earth to produce beauty and joy, it will in the end not produce food, either.”
~ Joseph Wood Krutch 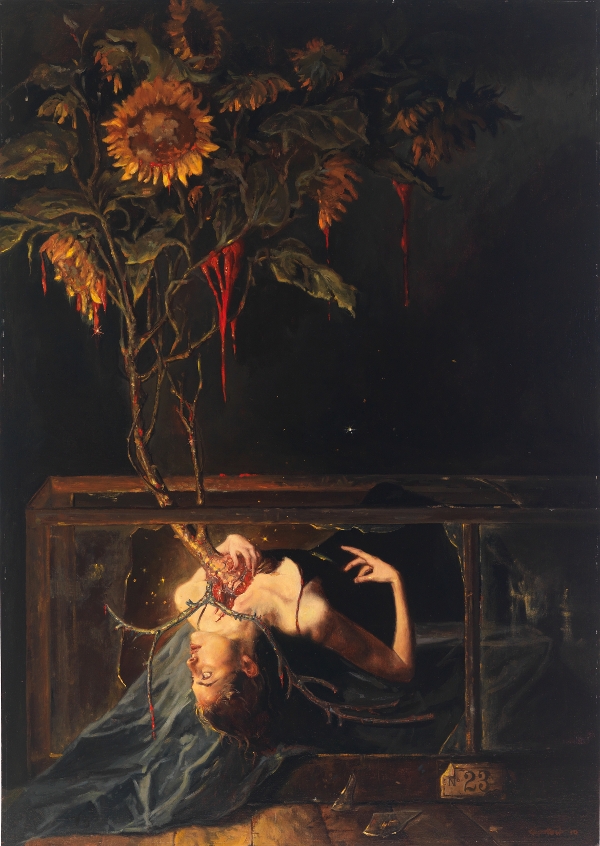 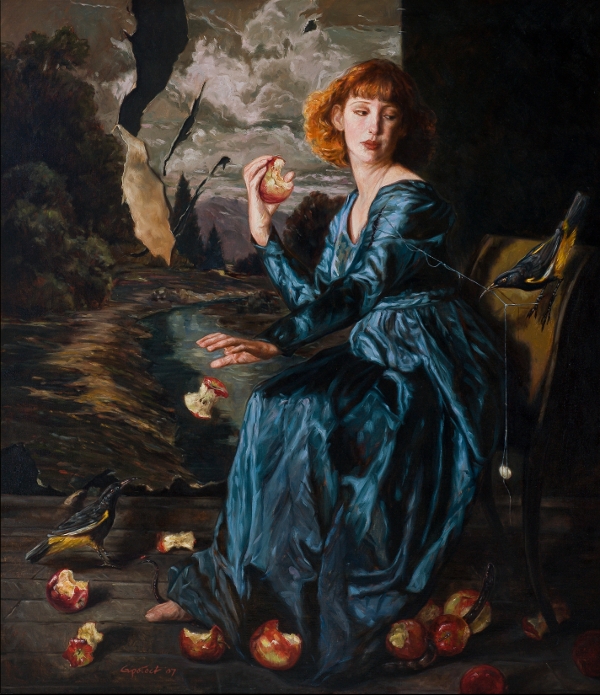 ook closely at the attractive people featured front and center in Gail Potocki’s paintings and you’re likely to find yourself feeling a bit, well, unnerved. There’s a romantic feel here, certainly: satin gowns that fall past the ankles, blousy sleeves on both the men and the women, Peter Pan collars and finely-sewn brocade jackets… Perfect complement, at first look, to the idyllic settings where nature’s abundance is everywhere. But like the house-bound pet who begins to gnaw at its own hide after too many days spent in too-close quarters, there’s an uncomfortable feeling of anxiety pulsing through these saturated scenes. Are these beasts being fed and cared for, tenderly consoled? Or is something altogether sinister going on? 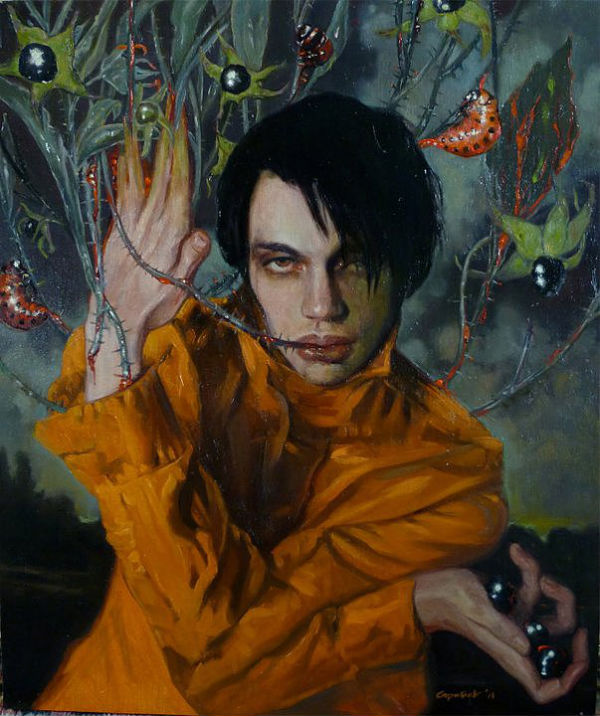 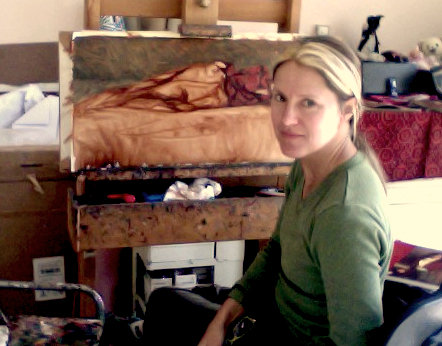 The artist, Gail Potocki, in her studio

Deanna Phoenix Selene: Gail, one of the things that first struck me about your work was your twist on vulnerability. Where traditionally, the female form has served as metaphor, even shorthand, for fragility and defenselessness, in your paintings the women are often wielding sharp objects (over-sized scissors, long, pointed needles…) and possess, if not a conscious attempt to do harm, certainly a purposefulness to do work which will likely result in injuring another. If, as Federico Fellini proposed, “all art is autobiographical,” where do you see yourself in your paintings? The women? Or the creatures who are baring their tendermost selves in trust? 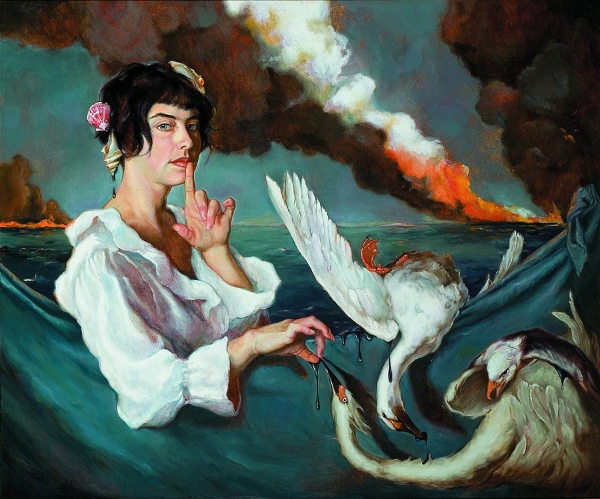 Gail Potocki: [quote]In my paintings, the woman is often a stand-in for all of humanity. I use the seduction of feminine beauty to act as a sort of ‘lure’ to encourage viewers to look longer and more closely at the work. She leads the viewers in, presents them with the unfolding scenario and makes them her co-conspirators. Without this human element in the painting, I think it is easier for the viewer to remove him or herself from the situation. I do not intend the paintings to be decorative or eye candy, although I do want them to have a seductive beauty amid the underlying drama and sometimes subtle brutality. [/quote]

Gail Potocki: Oftentimes, the individual in the painting is responsible for the environmental destruction that is taking place in the scene, and other times, such as in Reparation, she acts as a healing force towards nature. 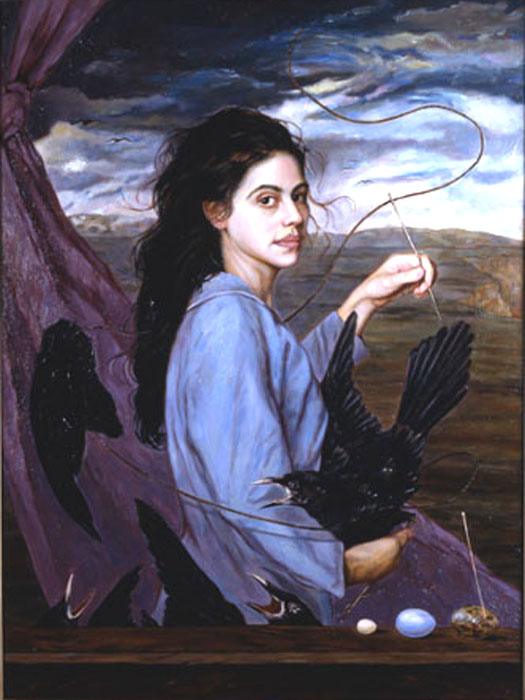 Gail Potocki: Maybe it depends on whether I am feeling optimistic or hopeless about our place in nature at the time that I am creating. When I get sucked too far down the rabbit hole of despair and am holding on, white-knuckled for the Apocalypse, I have to pull myself out from time to time and try to see the possibilities and paint something less emotionally heavy. That being said, I suppose I personally see myself as one of the women in my paintings since I can’t escape the fact that by being human I am as guilty as most others for our role in nature’s demise. But at the same time, I definitely empathize much more with the other creatures in the paintings and it is primarily their side that I am supporting with my narrative. 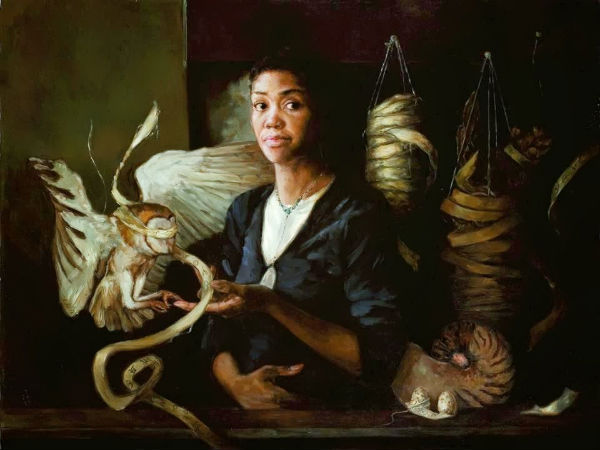 Deanna Phoenix Selene: I see a commonality with the work of Martin Wittfooth, whom I interviewed last year. Have you noticed a growing trend among young artists to address our stewardship of this planet? What led you yourself to become concerned? 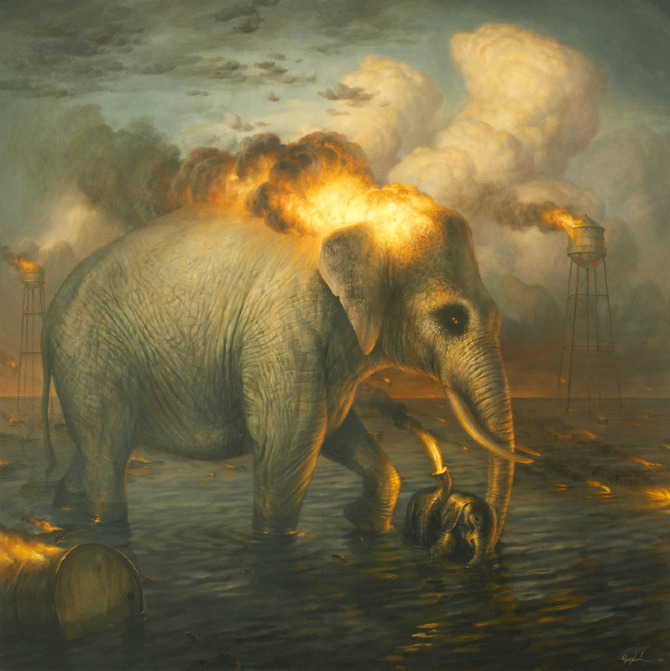 Gail Potocki: Yes, I am familiar with his work as well as with many others who are using nature and our responsibility towards it as an inspiration for their work. I think it is great that more artists are addressing these concerns to hopefully put them in the general consciousness. I hope it inspires more people to take action to reverse things. It is not enough to just acknowledge the problem and feel sad or helpless about it; that in itself is a waste of time and energy.

My awareness started when I was in high school back in the 1970’s. At that time, there already was a growing concern about pollution. and, specific to where I was growing up in Michigan, concern about water pollution in Lake Erie. It was such an energizing success when this awareness grew into action which actually reversed that almost-dead lake into a vibrant one again. When I think about it now, although that was a huge undertaking, it seems simple compared to what we now face as far as looming environmental disasters.

Deanna Phoenix Selene: Who has most inspired you? Both as an artist and as a woman. What were the messages you received about women, growing up? 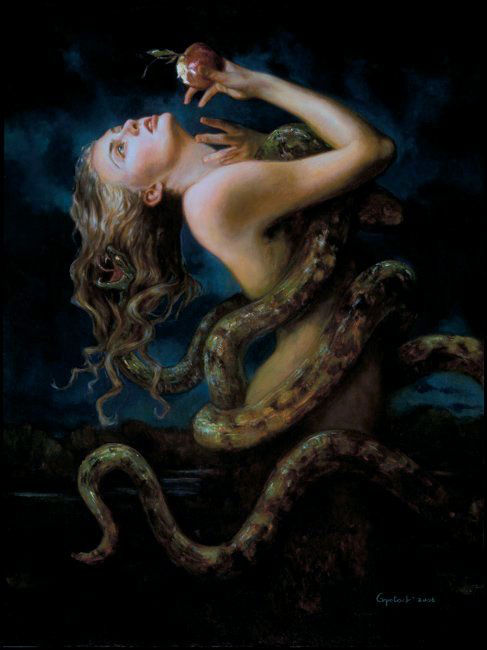 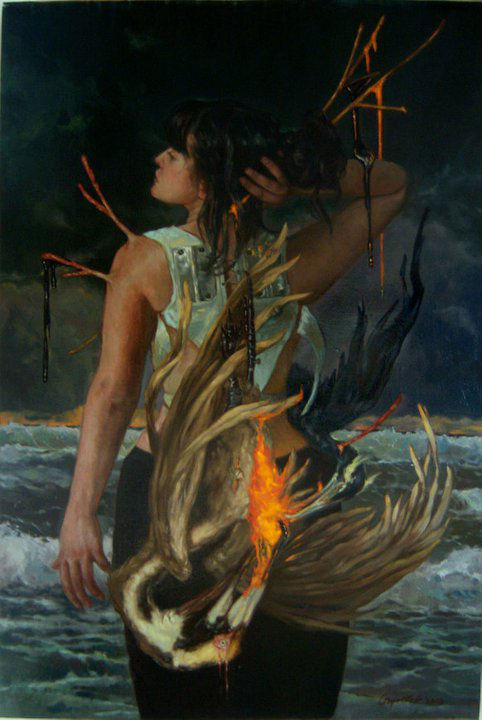 Gail Potocki: Well, I grew up as an only-child in Detroit. My parents divorced when I was very young, which was a bit unusual back then; none of my friends had divorced parents. My father was quite absent from my childhood, and I was raised by my mother and grandmother. I am a lot like my mother. I think the message I received was that you had to be self-sufficient and a bit tough and not rely upon anyone to take care of you physically or emotionally. For better or worse, I may have taken some of that message to an extreme when I was younger, for I was very suspicious of people and was much more comfortable being alone in nature and having animal pet friends. At various times I had a goat, horse, duck, ferrets, parakeet, dogs, cats and snakes. 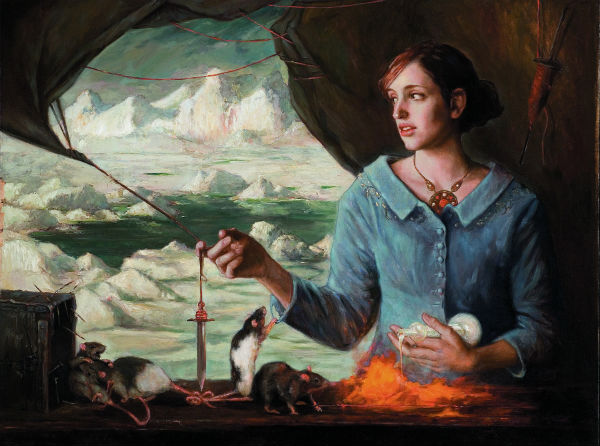 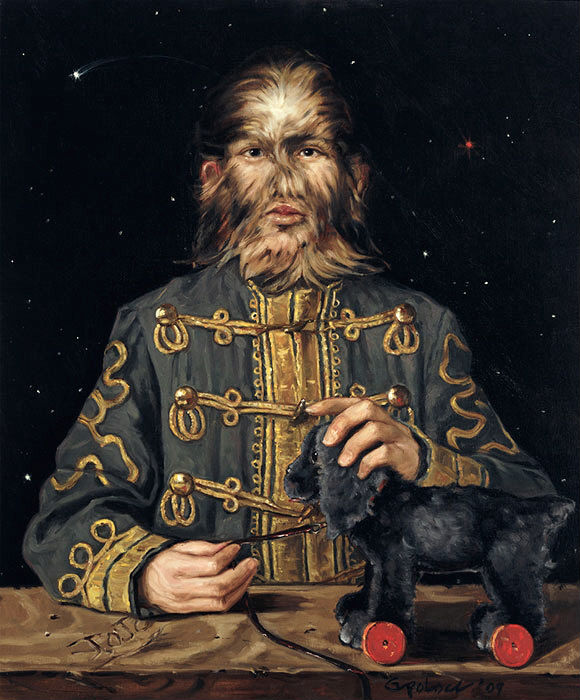 Gail Potocki: As an artist, my influences and inspiration are diverse and ever changing. Initially, I was very inspired by the Belgian 19th Century painter Fernand Khnopff. I loved the quiet mystery in his work and his cryptic symbolism.

His work really made me want to be a painter.

Gail Potocki: I also love Egon Schiele, Gustave Moreau, Jean Delville, and Gustav Klimt as well as a smattering of contemporary painters. In art school, I gained appreciation for the Old Masters and the regal portraits they created. I also love much of the Eastern European Symbolists painters, primarily Czech and Polish as well as Art Nouveau and German Expressionist artists. My list of favorites is pretty long! 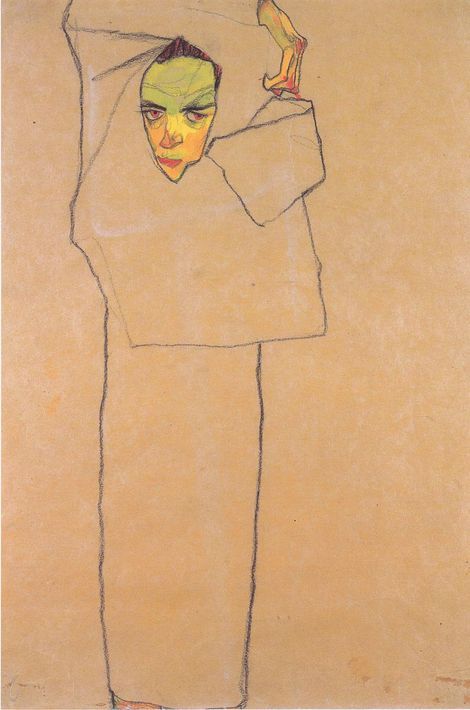 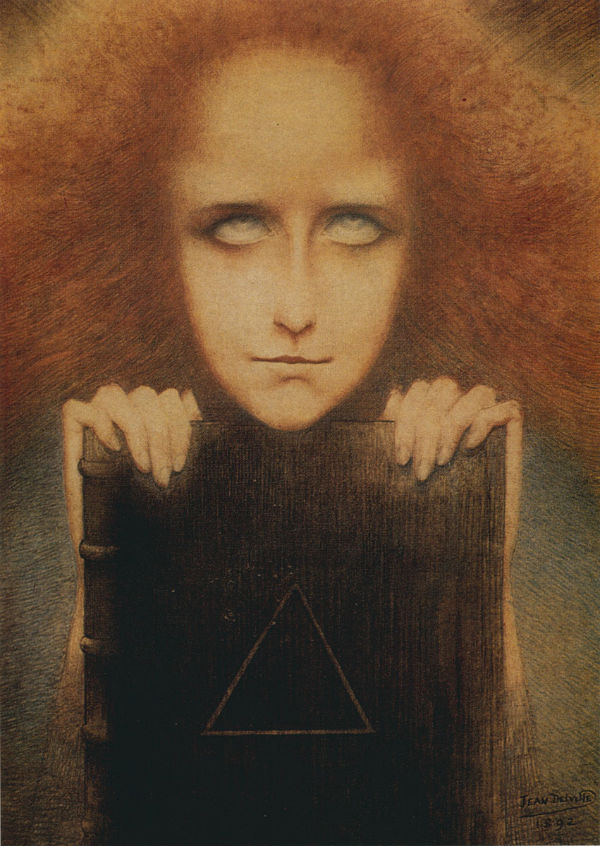 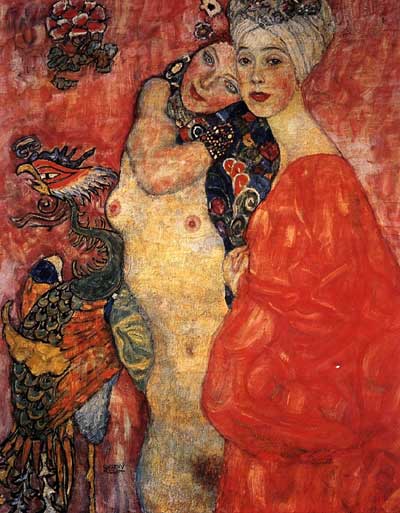 Deanna Phoenix Selene: What, in your opinion, should be the role of artist in society? Does the artist have a moral obligation to create work that expands The Conversation? 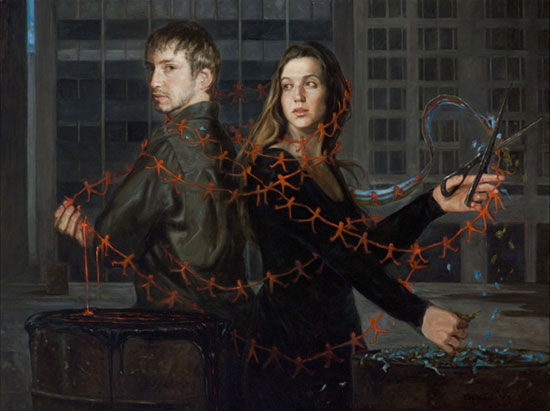 Gail Potocki: I don’t think there is any obligation to do it. I think first and foremost, a artist’s work should be honest and reflect who the artist is and what they truly think about. If the artist isn’t passionate in some way about the subject, then he or she shouldn’t paint it because I think that is insincere. I don’t believe artists should just pick a controversial subject-of-the-day in an attempt to make their work feel relevant, if the issue does not personally affect them in some way. Many artists create work just for the joy of creating, or because they love color and texture. or because they are fascinated with solving design problems. They have no interest in making a social or political statement, but their work is often extremely beautiful and inspiring all the same.

Following the Straight Line of a Circle | Gail Potocki

Deanna Phoenix Selene: Must an artwork be beautiful?

Gail Potocki: I won’t say that it must, because for some people, art is more of an intellectual experience as opposed to an aesthetic one. Personally, I love work that is both thought-provoking and beautiful. If I just want something to stimulate me intellectually, I’d rather read some non-fiction. Visually, I want to be enticed.

Deanna Phoenix Selene: Your pieces contain such elaborate stories. After you’ve completed a work and have sent it off, do you imagine the story continuing on?

Is it of your belief that once a work is completed, it no longer belongs to you? 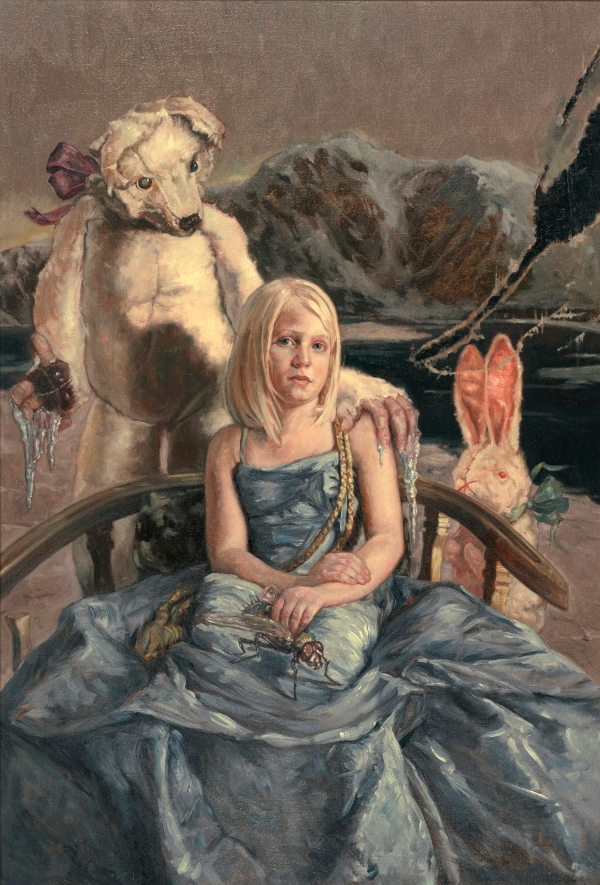 The Repositioning of Artifice | Gail Potocki

Gail Potocki: It took me a while to be able to let go of my work emotionally. I wanted to keep the pieces, at least for a little while, to absorb them myself.

In the beginning there was the fear that maybe “I only have a couple good paintings in me,” so I should hold on to them. Now for the most part, I feel like they belong out in the world, to hopefully inspire others, and yes, continue telling their stories. I like knowing that my painting is being experienced and loved by someone out there and will hopefully get passed down to someone else over time and continue to be loved. 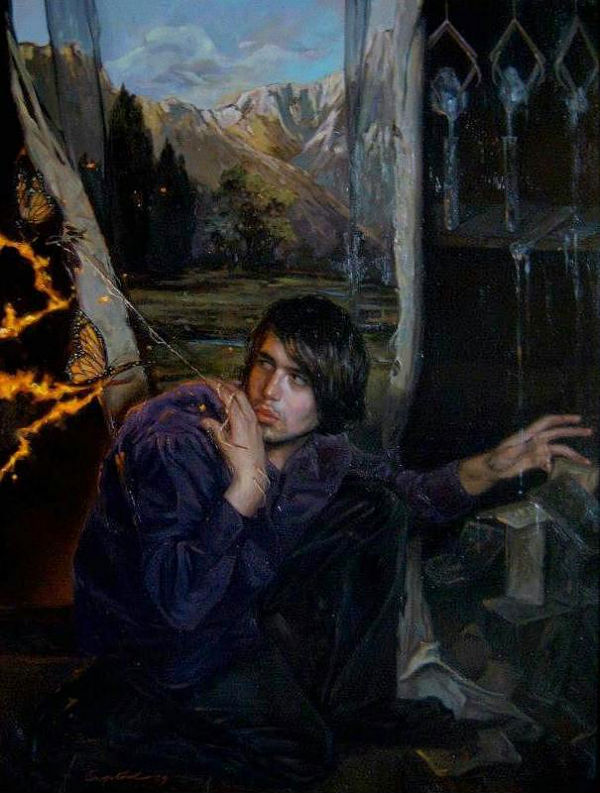 Deanna Phoenix Selene: A mutual friend of ours, Marina Korsakova-Kreyn, when she learned I was going to be interviewing you, encouraged me to ask you about the role music plays in your worklife. Do you play an instrument, Gail?

Gail Potocki: I don’t play any instruments and I don’t think I’ve ever sang a single note on key in my entire life (not even in the shower). But, I have always been passionate about music. I grew up in Detroit in the 60’s and 70’s, which was a great time and place for music. I was quite into what was going on locally at that time, as well as the emerging Punk scene in the late 70s. I almost always listen to music when I am painting; everything from soundtracks to progressive rock to Indian sitar music. It really helps the flow of the painting and keeps my mind in the zone.

Deanna Phoenix Selene: What has been the most unexpected gift for you from choosing this life as a painter?

Gail Potocki: I was such a late-bloomer and didn’t paint my first painting until I was nearly forty years old. Before that, I worked in the manufacturing department for a educational publishing company which was not an artistic job whatsoever. My somewhat abrupt and unforeseen career change has completely changed my life in so many ways. [quote]It is strange for me to think that I was in the middle of my life yet had no idea I was going to be an artist for the rest of it. Now, working creatively on paintings daily has led me to be even more creative in all areas of my life. [/quote]Also, I have since met so many fascinating and interesting artists and collectors that I never would have known otherwise. I feel content that I am now doing what I am supposed to be doing.

Deanna Phoenix Selene: And has brought you the greatest joy?

Gail Potocki: Creating in general brings me happiness; I get great satisfaction in feeling like I am making something out of nothing. Also, even though as a child I was quite a loner, my disposition has gradually changed and I am finding great joy in my relationships with other people. Being out in nature is also important and necessary for me.