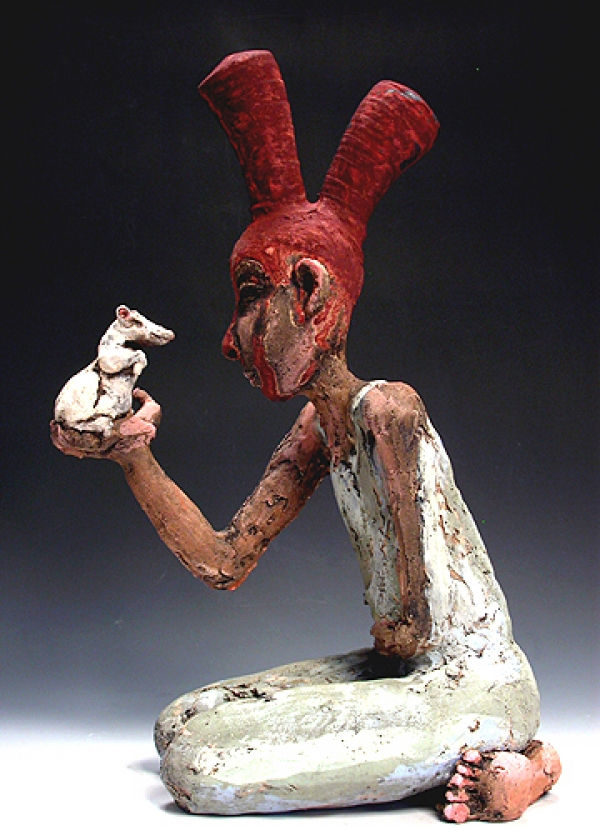 Looking at her sculptures, one becomes flush with curiosity as if having stumbled upon an anthropological dig into a civilization that exists only in the artistic and spiritual mind.

Are these characters inviting us to reconnect with our collective human histories? A spirituality that crosses all cultural and political divides? 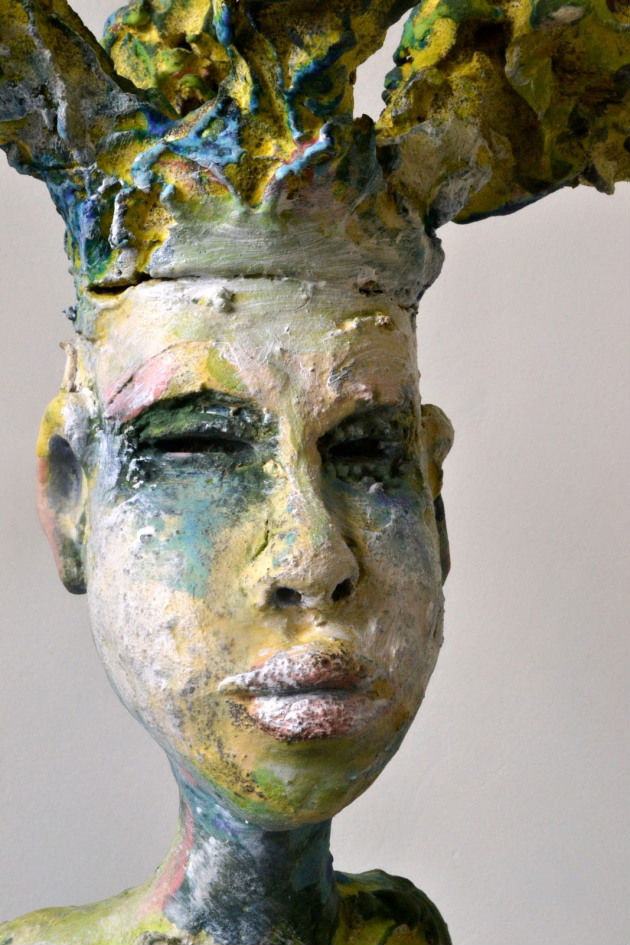 Susannah Israel: “My work has its source in the fluid nature of experience and the transience of personal history and memory. These gathered images come together like the many variations found in stories of shared experiences.” 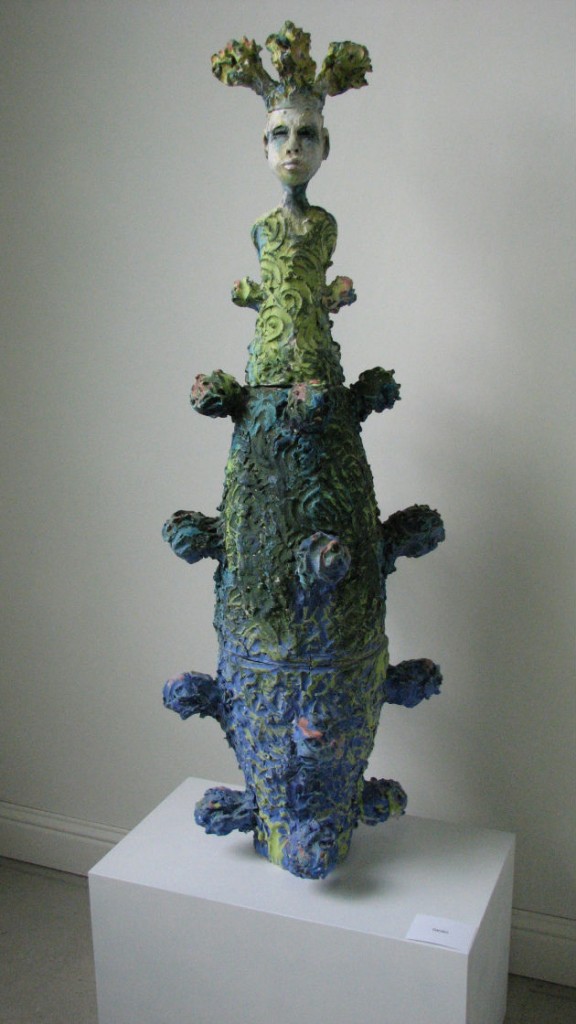 For Israel, who has lost several people close to her to cancer, AIDS, and other terminal illnesses, [quote]A particular resonance comes from the voices of the beloved dead, who shared these memories with me. Hence, though my work is largely elegiac, it also celebrates and honors the living community.[/quote] 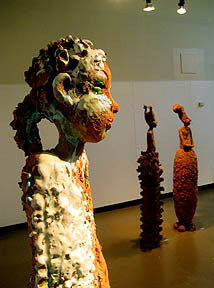 The California artist’s medium of choice, terracotta (literally, ‘baked earth’) is common to cultures from Japan to Italy to Mexico to China and beyond. Says Israel, “Their distinctive qualities have certainly influenced me while working with the material; my visual library is a compendium of historic images, across time and around the world.” 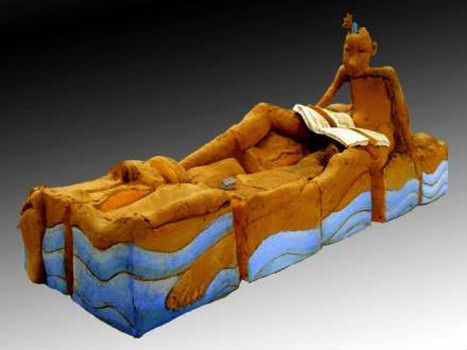 Specifically, the Haniwa figures of Japan, from whom she borrows their distinctive way of sculpting eyes: “rendered by cutting out the shape of the eye to give the illusion of depth to the gaze.”

Israel also found inspiration from the Xian terracotta tomb figures of China, who “depicted the people of the time in such lovingly crafted detail.” 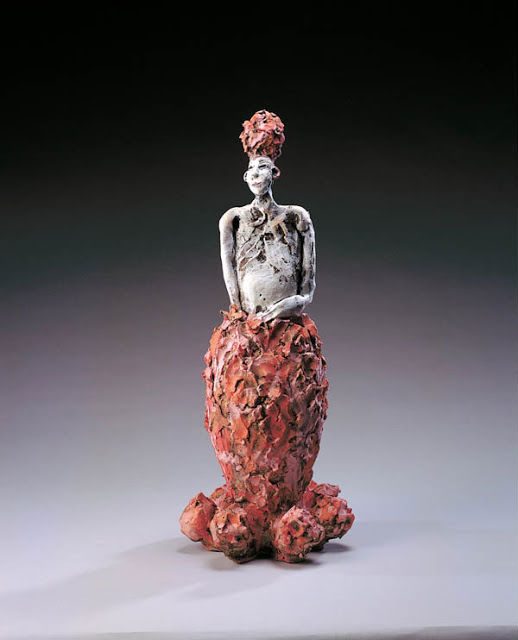 The faces of her people echo the “attenuated length to the facial features” of figures created by the Olmec, the first major civilization of Mexico. 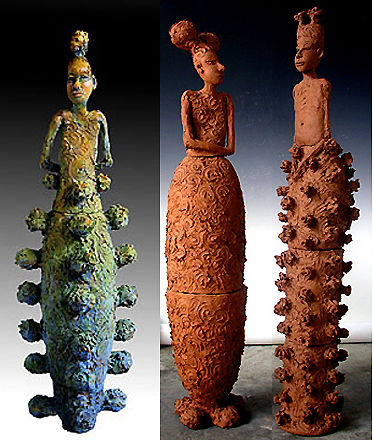 “Metonymy,” Susannah Israel
Terracotta sculpture, lifesize, From the series on figurative language, 2007-2008; challenging our assumptions of gender, ethnicity and culture.

And finally, the artist has studied the formulation, application and firing of Italian majolica extensively, finding the majolica surface to be “beautifully suited to the warm red of terracotta.”

With such a rich palette to draw from, it’s no wonder Israel is the only artist from the USA ever to win the Fletcher Challenge Premier Award.

I asked Israel if she saw herself as a sculptor or a clay artist. And whether the distinction even mattered.

Susannah Israel: “There is a definite distinction, as a clay artist is focused exclusively on ceramic media. I was ‘raised in clay’ on the potter’s wheel, a practice I still greatly enjoy, and I do teach wheel-throwing once a year. I studied with master throwers: Byron Temple at Pratt Art Institute, and David Kuraoka at SF State University. My sculpting process might be described as slow-motion throwing, where I construct my pieces from large coils, rotating around the piece as I build. The alchemy of glazing, from designing the formula to application and kiln firing, are ceramic art practices requiring years of dedicated practice. So clay is my foundation. However I agree with Rene Di Rosa that what is important is “not what it’s made out of, but what it’s made into.” 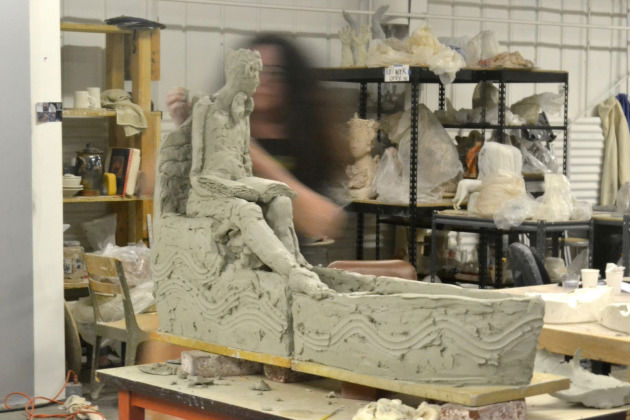 Is there a story then being told with her pieces? A narrative she wishes to convey? Or are her creations left deliberately open-ended? 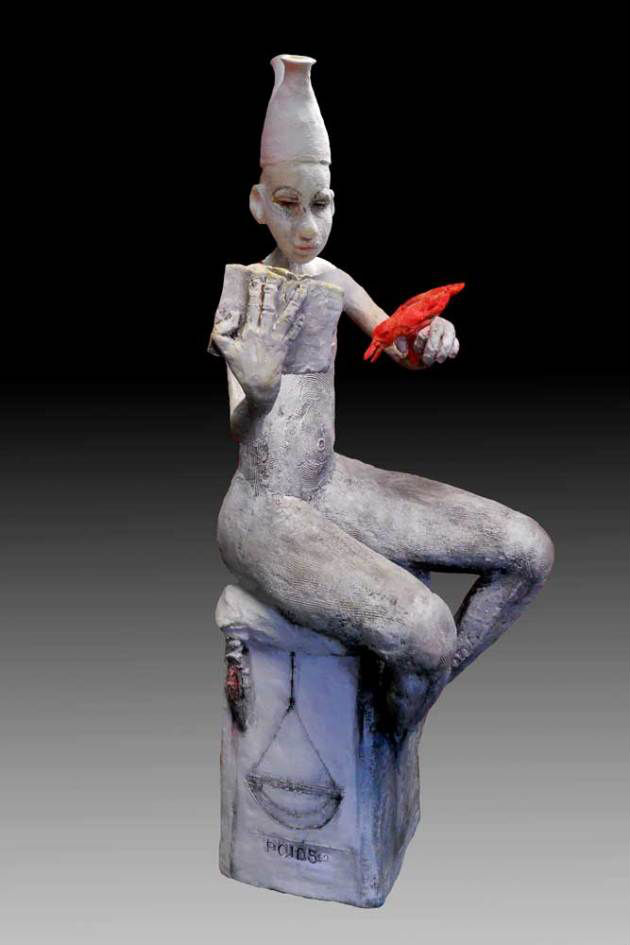 [quote]Every piece has a story. But what continually fascinates me is the way an intensely personal piece will be claimed by the audience as their own story, even when the details informing the work are quite unique to me. So I have, gladly, abandoned any idea that I need to make the work more general for it to communicate broadly.

Israel also credits growing up reading such animal stories as Wind in the Willows, White Fang, and Andre Norton’s “sci-fi, telepathic, post-apocalyptic beasts, combined with the good luck of a city child exposed each summer to the fields, woods and barnyards of the east coast, from Maine to Pennsylvania. I had pet fish, mice, an opossum, cats, a chicken, dogs and birds, and I spent many an enchanted moment watching the wild animals as well.”

Such a childhood left Israel’s imagination “free to roam.” 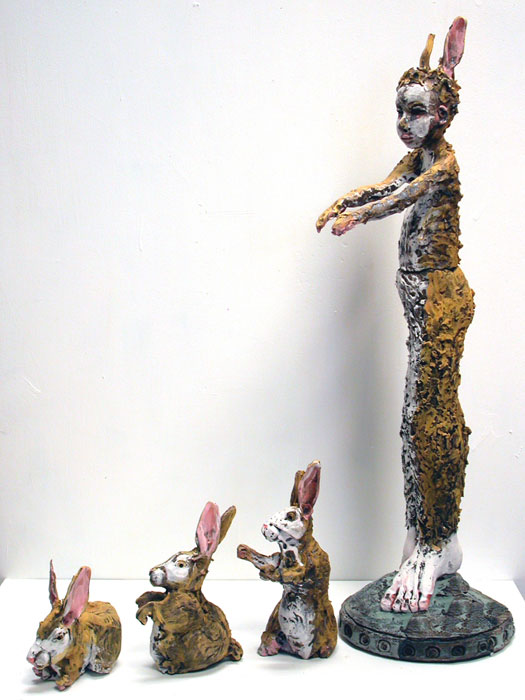 [quote]I invented an ongoing, poly-themed, multicultural adventure narrative to all my relationships with animals, and it makes sense that would translate to the sculpture. Certainly we are all here together on this planet for the same ride.”[/quote] 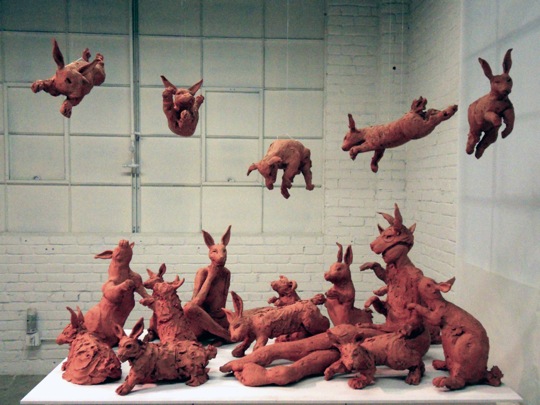 One wonders if the artist is creating her own unique spirituality: A new people formed of the past but with an eye to what might be possible for us in the future. 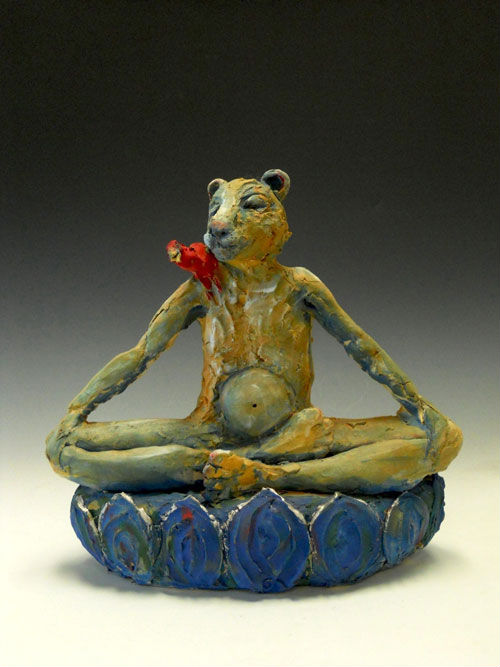 Susannah Israel: “I was raised by a painter and a writer from sharply different cultures, and one of the compromises they sought, in spiritual matters, was fellowship in the Society of Friends, or Quakers. So from an early age, I was taught universal tolerance, global pacifism, and fair sharing of resources. Probably the most powerful message was recognition of the divine spark in everyone, everywhere. I also benefited from the unusual practice, from six years old on, of sitting in silent group meditation for an hour each week, which developed my thinking and imagination through freedom from distraction.” 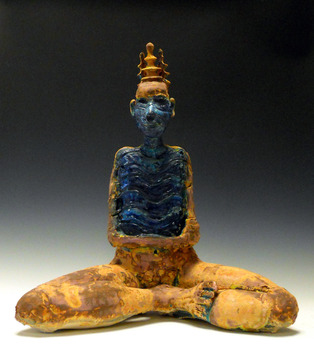 So what was it specifically about the medium of clay that Susannah connected with as an artist? Was it the sensual aspect, that tactile relationship between hands, fingers and clay? 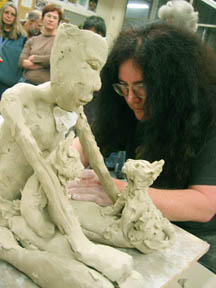 Susannah Israel: “Clay is a remarkable material, requiring attention to its forming qualities through a series of stages that are akin to working with bread dough, leather, plaster, wood and glass. There is always more to learn throughout the lifetime of the artist; Peter Voulkos once described his entire working life as ‘the courting of the accidental.’ The tactile aspect and the immediate freshness of the clay are irresistible, and the process is a metaphor for human endeavor. I submit here my artist statement:

[quote]There is an inherent paradox when working with so responsive a material as clay. Traces of touch – fingerprints, knuckle marks – are formed, moment by moment, with relentless fidelity. Such intimate contact of hand and clay remains far beyond the process, beyond even the life of the artist; it is a permanent record of impermanence.'”[/quote] 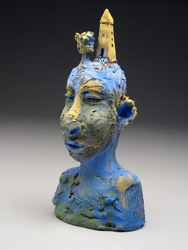 California clay artist Susannah Israel’s seminal work is widely shown and appears in private and public collections around the world, such as the American Ceramics Collection, Mint Museum, the Archie Bray Foundation, Mission Clay, and the Toki collection. Israel has received a Virginia A. Groot Foundation grant, an NCECA Resident Scholarship to Archie Bray, and a Distinguished Faculty Service Award for curriculum, among many honors. Recent work with colorful theatrical costumes can be seen in the Yinge Ceramics Museum in Taiwan.

She is known for her expressive working methods with clay, and for her signature glaze color and texture.

Susannah Israel has also worked on industrial terracotta, beginning in 1995, at the Gladding, McBean factory in Lincoln, CA. 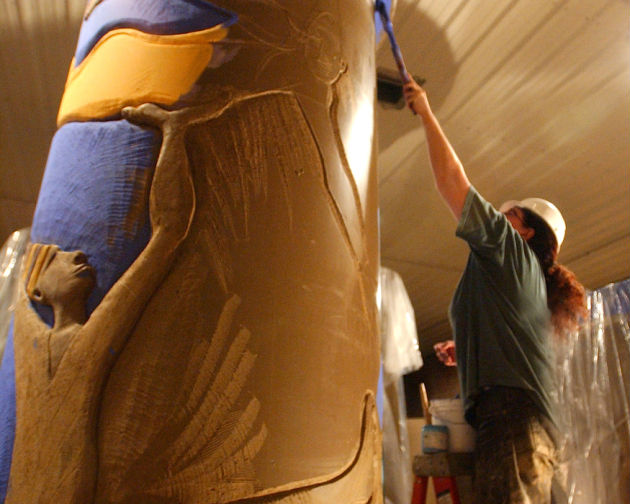 Israel holds an MFA in Ceramics from San Francisco State University and currently teaches for Peralta College in Oakland.

To learn more about Susannah Israel’s work, please visit her website at: susannahisrael.net.