Home » Artists » Figurative painter » The Intersection of Beauty and Distress: the Paintings of Caitlin Karolczak

“My source material sometimes comes from my collection of vintage medical photographs, images that blur the line between artistic portraiture and scientific illustration. In many cases, photographers deliberately and artfully arranged their subjects, although their stated purpose was documenting debilitating or disconcerting medical conditions.”

“I wrestle with this intersection of beauty and distress. As I reinvent the likeness of an individual, I give them authority from what was originally a position of vulnerability. My aim is to confront the viewer with sensations both of being the unconventional ‘other’ and of human commonality.

We are Made a Spectacle

The people I paint are not passive; they confront, make eye contact with the viewer, or make you feel as if you’ve happened upon a scenario where you are a voyeur looking onto a very private scene.

Able-bodied people usually have the general reaction of being caught off guard. Sometimes the viewer’s first response is to recoil in disgust, or are at least made uncomfortable.  But if the viewer is willing to spend time with the piece, after they get over this initial feeling of discomfort, they usually find the experience very rewarding and most find familiarity with it.  But they first have to be vulnerable with the piece.”

“As far as I can tell, my work seems to have resonated very well with physically challenged people.  At least I haven’t had anyone with any sort of abnormality confront me about being offended; in fact, its been quite the opposite. I could tell many stories of people finding comfort in my work.  A man once told me that my painting Lamentation gave him comfort in regards to his twelve-year-old son’s suicide.

I’ve had other clients who bought specific pieces because it associated with illness in their life.  People with terrible spinal injuries being attracted to work with this fractured spine motif, or even a mother whose attraction to a boy in my painting was because of its connection to her terminally ill child.

I don’t have many concerns regarding my work in terms of exploitation. The nature of my source material insures there is no specific living person depicted.  In the art world today there are so many different examples of exploitation, from artists giving birth as performance art, to artists being exploited by the dealers and institutions that are supposed to help them.  I care a lot about the people in my work and their conditions. By depicting this sort of subject matter, I’m trying to confront attitudes of a sometimes flawed society. Like artists Joel-Peter Witkin and Andres Serrano, I am sometimes accused of exploitation; but I believe their exploration through art is sometimes misunderstood by viewers who refuse or are unable to take a look at themselves. Which is what a lot of good art strives to do – to make the viewer reassess themselves in a critical light, or for them to feel akin to an image or person that initially prompts feelings of disgust or discomfort.”

“I think the topic of exploitation is one big grey area. One person’s idea of exploitation is different from another’s; and the word is probably over-used. I think some artists go too far out of their way to avoid controversy; while others are constantly looking for a new angle. Controversy attracts attention, and in an already over-saturated art world, this is a vehicle that is all too often used to promote oneself. I think if the exploitation yields a broader understanding of an important subject matter, it may very well be a positive outcome. I don’t think we should avoid all conflict; but each scenario is different and it’s up to the viewer to judge for themselves.”

“Working from life can can be easier or harder, depending on the situation.  A live model brings a sense of urgency and realness to a portrait.  But with that I would feel the need to portray them as they really are.  If I work from a live model, it’s never meant to be a portrait, because I like to have artistic license with what I’m doing.  My ideas change as the painting goes along.  If I don’t like something on the painting, I can change it. I also prefer to work with ideas and images I own–that way I don’t owe anything to the model. I don’t have to worry about hurting their feelings or making them uncomfortable. Most of the faces I end up choosing are of people who are long dead and forgotten.  Also, my paintings take an enormous amount of time, to have a live model available as much as I would need them is almost impossible.  I don’t like to be rushed and enjoy problem-solving at my own speed. 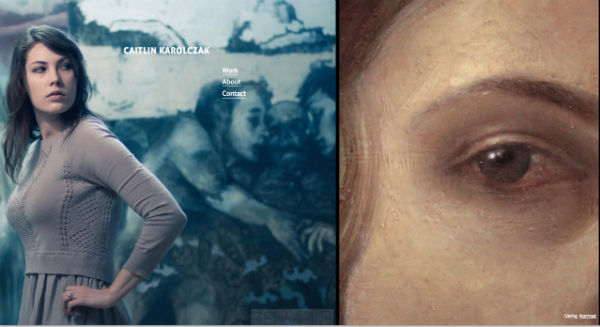