Home » Featured » ASTROBLAST: How Citizen Science is Increasing Our Understanding Of the Universe

“We have arranged things so that almost no one understands science and technology. This is a prescription for disaster. We might get away with it for a while, but sooner or later this combustible mixture of ignorance and power is going to blow up in our faces.”
~ Carl Sagan

ASTROBLAST: Science or Myth? Cosmic Ray Answers Your Questions About the Universe

[Editor’s note: The following is the second entry of Dr. Raymond Frey’s new column for Combustus in which the American astrophysicist takes on questions sent in by readers on everything from, “Is time travel really possible?” to “What is dark energy, anyway?” In today’s post, Dr. Frey shares with our readers the exciting new direction science is taking, in which ordinary citizens can now participate in analyzing gravitational wave data as it comes in. ]

It has been a while since I’ve corresponded here. Apologies to all. I hope to do better going forward. First, a brief status report, then an attempt to answer a question many of you have asked.

You might recall that I am a member of the LIGO (Laser Interferometer Gravitational-Wave Observatory) collaboration, which has brought the discovery of gravitational waves and the advent of a new kind of astronomy. More on this in the future, as I devote a post to each of the great questions Combustus readers have sent in to me.

On April 1, LIGO began its 3rd observing run. (We call it “O3” just to trip people up.) Since our very first detection of gravitational waves in 2016, our “telescope” has become even more sensitive, and we are now observing the merger of two black holes in deep space at a rate of about once a week. Yes, I can share this with you ~ despite the fact that we haven’t yet published the results ~ because we are now releasing some information publicly within minutes of detection.

This is new in O3. It means that astronomers, whether professional or amateur, can point their telescopes at the region of the sky where we in LIGO have just detected an enormous burst of gravitational waves.

Finding proof at last of the existence of black holes is indeed an exciting development, but what is the non-scientist to do with news of such a discovery? Why should this matter to artists and readers of Combustus, for instance? And how can such explorations become more of a part of all our everyday lives?

“The main question I have for Dr. Frey is that while the universe is slowly revealing itself to us while astrophysicists look for answers and more questions, what are we as the general public to do with this information? How should we process this information as lay people?”

My response is that science and art are both creative activities. Success in both disciplines requires a combination of technical expertise and creativity (as well as money and luck, perhaps). One big difference, of course, is that in science we are trying to uncover what Nature has already made, whereas in art the artist is the creator. I readily get choked up emotionally by art, be it van Gogh, Mozart, or Coltrane. But similarly for a brilliant scientific insight or an elegant experiment designed to probe Nature’s fundamental secrets.

With art, there are performances and showings. It is all about getting the public involved directly in experiencing the creative product. Whereas science feels for many to be too cloistered, available only to the select few who have successfully navigated the vagaries of academia. What becomes public is so heavily filtered and regurgitated that it is unclear what is really going on. The public shall not trespass. Right?

Enter Citizen Science. The first project I can recall that encouraged public participation was SETI – the Search for Extraterrestrial Intelligence, founded by Carl Sagan and Francis Drake. Twenty years ago, the project announced SETI@home, which asked people to install their screen saver, thus using the otherwise idle computing power available in millions of home computers to process the data from radio telescopes, which SETI analyzed for hints of messages from ET. And now citizens can participate in the next generation of scientific research.

Some of my LIGO colleagues have used the same software framework to develop Einstein@home, which invites the public to search radio data for pulsars, spinning neutron stars that emit pulses of radio signals. Successful participants, non-scientist citizens who detected pulses from these spinning stars, then co-authored journal papers sharing the discovery of a new pulsar.

So now we are inviting the public to do what humans are especially good at: recognizing patterns. Our data in LIGO includes all sorts of weird patterns due to noise caused by various environmental contaminations (e.g. ground motion) or instrumental glitches. Using Gravity Spy, everyday citizens can now be involved in classifying these artifacts, enabling us to tune up our data analysis algorithms, and thus making it possible for us to detect ever more distant astrophysical events.

Now back to the current LIGO O3 observing run and open public alerts. Our discoveries are made public with a delay of less than an hour. We are working on a better public interface, but at present, you can start by heading to the Gravitational Wave Open Science Center.

Once there, click on the “Software” tab near the top to go to “Web Apps.”

Then select “Public Alerts” where you can choose “Latest” or “All Alerts.”

From the latter, you can get more information on any of our public alerts, most of which are candidates for mergers of binary black hole (BBH) systems.

You will also see a map of the candidate event’s location in the universe. We say “candidate” because we cannot fully vet the legitimacy of events in a few minutes. The fully vetted events will appear in a publication down the road.

Our expectation is that 90% of the candidates will be

The others are some kind of noise excursion. The alerts actually give the “betting odds” for the type of event: BBH, BNS (binary neutron star merger), BH-NS merger, or Noise.

You can even get the alerts sent to your phone. And the same page can also take you to the Gravity Spy interface. Or if you really want to go deep, there are links to download software where individuals can analyze the LIGO raw data, which we make available when the events are finally published. (Numerous high schools and universities, including the University of Oregon, use this software and data to illustrate data analysis techniques.)

NASA has long championed public outreach. This has undoubtedly helped with their funding, which, by the way, comes from the public. But the National Science Foundation (NSF) has really pushed for the practice and legitimacy of citizen science and for releasing scientific data to the public, insisting that “the public owns the data.” As LIGO is funded by the NSF, we are obliged to provide public data releases. Citizen Science is here to stay. Here are some other fun places to check out: Earth Sky’s citizen scientist discoveriesPhys.org’s news: DIY gravitational waves with BlackHoles@HomeBlackHoles@Home I’ll sign off now but I would be interested to hear if artists agree with my statement at the top of this column that in art the artist is the creator. Or is the creative process perhaps more complicated than that? I’m reminded of the line from Amadeus, where Salieri laments that Mozart is simply “taking dictation” when putting the notes to paper.

Raymond Frey (b. 1956) holds a Ph.D. from the University of California at Riverside. He joined the University of Oregon faculty in 1989 where his field of research focuses on gravitational wave astronomy and experimental high energy physics and astrophysics.

For more on Frey’s research in Gravitational Wave Detection and Astrophysics, please visit his website.

And look for these and other topics in near-future Astroblast posts: 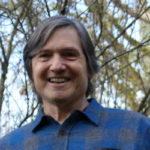 Also, if you missed it, check out Dr. Frey’s column on How Citizen Science is Increasing Our Understanding Of the Universe.