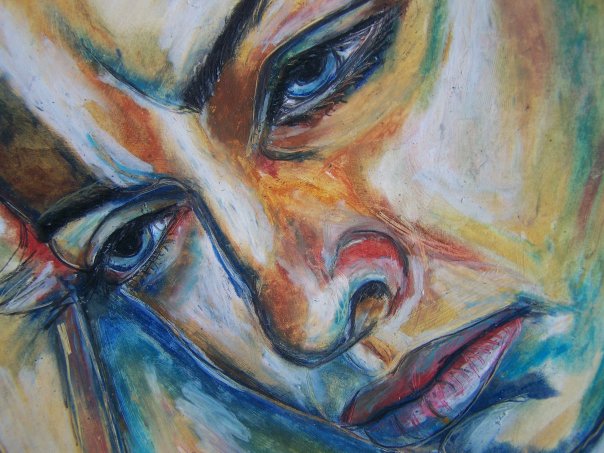 or those who have never experienced mental illness personally, it can often be a struggle to fully understand what a loved one is going through. We badly want to help, to end the other’s suffering, but it is often hard to reconcile the image that many of us carry of the face of mental illness (the street person who mumbles incoherently to himself; that elderly neighbor who soundlessly watches the world go by from her upstairs window; the wild-eyed criminals paraded by our television screens) with this person we have known perhaps for years, who has maybe raised children, headed up a department, coached the neighborhood pee-wee league. This person who by all outward appearances has always, well, had their act together.

We want to believe that our friend’s struggle is just a momentary battle with fatigue, a temporary set-back brought on by an unfortunate disappointment (or disappointments) that just hit them especially hard.

More than anything, we just want to help them get back to Normal.

Yet even the most well-meaning suggestions for sensible ways to “snap out of it” can lead to an even greater sense of alone-ness for the one battling the disease.

For April Mansilla, the decision to start expressing on canvas what was going on inside her was a revelation. Suddenly, feelings for which there seemed no words were now finding themselves coming out in bursts of intense yellows and reds and blues. And, best of all, in a way that others could see and comprehend. 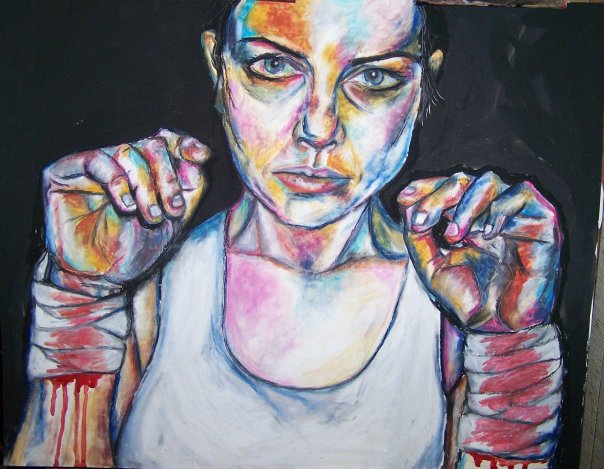 “God, Can You Hear Me Now?” April Mansilla

April Mansilla: “Everyone has battled sadness, felt defeated, even hopeless in one way or another. Maybe not to the intensity of depression, but it has had an impact on everyone’s life.” 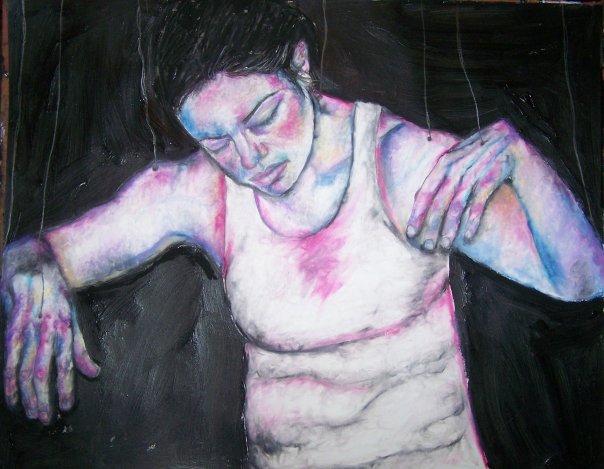 April Mansilla: [quote]I myself cannot comprehend illnesses outside of the ones I have had, but I can empathize, and I believe that is what art does. It draws the viewer past clinical definitions, and lets the viewer empathize on their own terms.”[/quote] 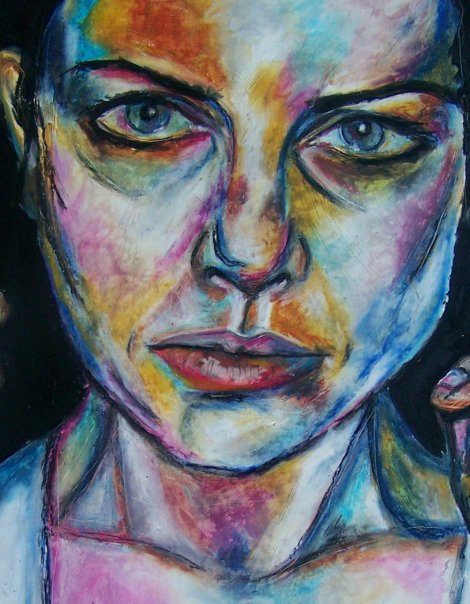 “God, Can You Hear Me Now?” (close up) April Mansilla

April Mansilla: “I always jokingly think, ‘I wish I could just photocopy my brain, it would be so much easier!'”

But, Mansilla says, in many ways it is as if something is taking over and guiding her as she works. Perhaps a part of her that isn’t held back by fear or by that voice telling her how things should or should not be. She just paints.

April Mansilla: [quote]My fingers tend to run across the paper or canvas almost as if I’m reading braille, and I suddenly know where everything should be.”[/quote]

And after a piece is completed? Does she feel then some sense of release?

April Mansilla: “No, unfortunately there’s never any true release. Sometimes I feel very frightened of what I have just created, other times elated. I am tied to something that can hurt you one day and love you the next. It’s overwhelming. Some days, believe me or not, I wish I wasn’t tied to this need to paint.” 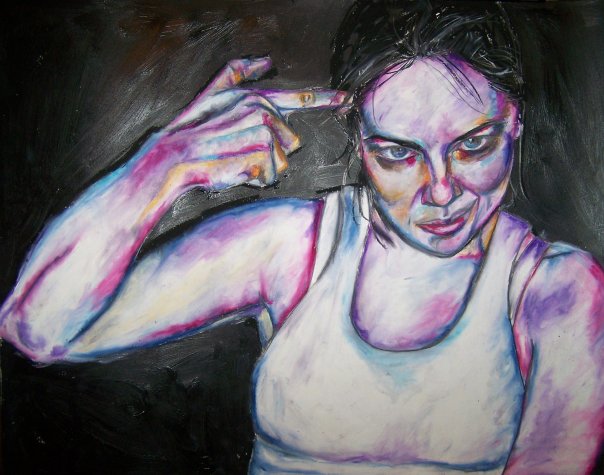 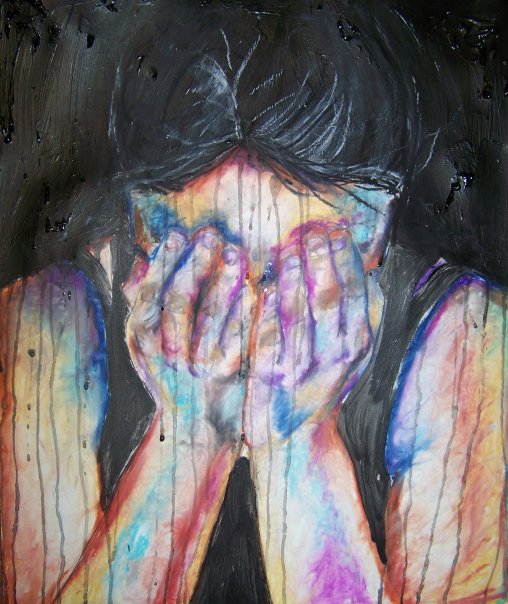 I first met Mansilla a year-and-a-half ago when I included her in the larger Combustus magazine piece, “The Many Faces of Eve,“ which explored how women are expressing themselves in the arts today, now that more are behind the camera and wielding paint brushes and pens rather than merely being the subject of others’ imaginations.

At that time, she was only weeks out of being released from in-patient status as a psychiatric patient, after attempting to take her own life. 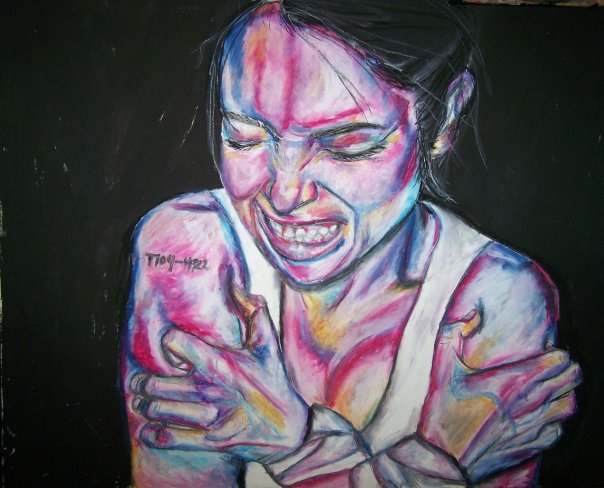 “Brand,” by April Mansilla. The artist bears the number she was marked with when she became a psychiatric patient.

Since then, beautiful things have happened for her. As a result of her painting and sharing her work and story with others, Mansilla has received an enormous out-pouring of support and gratitude, and, in December of 2011, she was honored as “Best Emerging Artist” by the group Touched By Fire, a non-profit program which celebrates and supports the work of artists with mood disorders such as depression, anxiety and bipolar disorder. 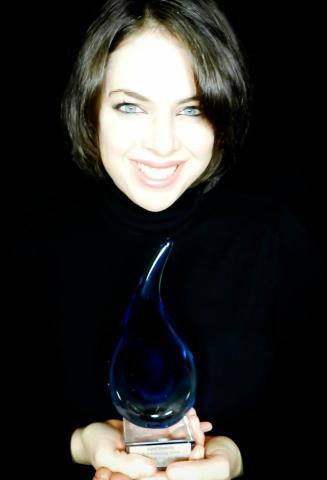 Checking back in with her now, I wondered if things have gotten any better for her on the inside as well. Does her depression come and go? Or does Mansilla experience it more as varying waves of intensity? Can depression ever be cured?

April Mansilla: “My depression is still a revolving door. I still go to the psychiatrist often, though only as an outpatient now. Sometimes I like to bluff and say that I am doing better, but she sees through that. Even though I write about my depression and paint about it, I get very nervous about openly speaking about it on the phone or face to face. Years ago, when it really hit harder than ever before, I believed one day I would just snap out of it. It was really hard to hear my doctor and family say, ‘You were always sick.’ I denied it. I thought I was just a little sad from time to time. I now know for certain it cannot be cured, but it can be managed somewhat, though it may take years to get to that point. For many, it is a losing battle. I know it would have been for me without proper intervention, and that is what is truly heartbreaking about this illness: how many amazing people we have lost.” 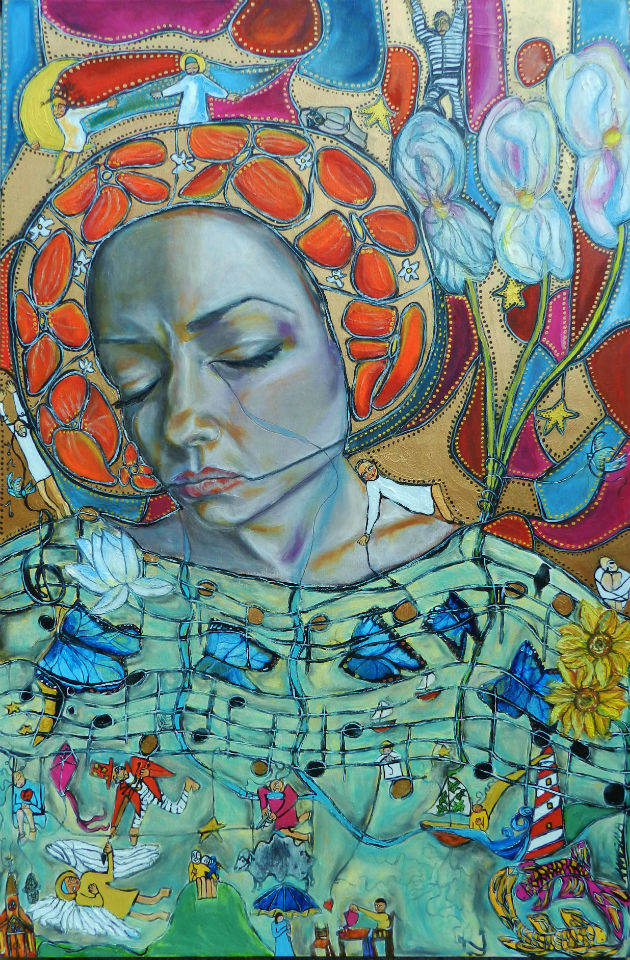 Does Mansilla feel that there is anything about being a woman that makes one more vulnerable to depression? What advice would she like to give others, especially parents of daughters, to help them take good emotional care of themselves?

April Mansilla: “When I was in the ward, it was mostly women, but I can’t say for sure women are more prone. That being said, for myself as a woman, I always felt I was lacking. I was very critical of myself and constantly trying to act strong, because I thought mental illness was a weakness.” 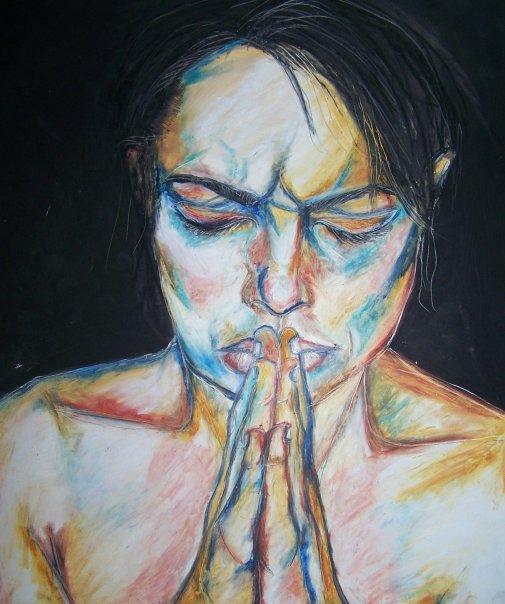 April Mansilla: “I would like to tell parents to watch for signs; early prevention is critical. And I’d ask them to never give their children the impression that having a mental illness makes you a weak person. This is especially important if it’s you, the parent, who is suffering from mental illness, because if you feel you are weak, and here you are a grown woman, what is your child to think? In our house we also keep an open dialogue. Keeping silent could mean a life or death situation, especially since depression seems to run in families.”

What does Mansilla consider to be her greatest accomplishment? And the hardest challenge? Lessons learned?

April Mansilla: “My children are my greatest accomplishment. And, likewise, the hardest challenge was I felt I had let them down by being depressed. When I was an in-patient, I worried so much about them. It was heart-breaking. And when I got home, I was just trying to make it through the day. I wanted to be the mother I felt they had lost. The lesson I learned is how beautifully empathetic my children are, and how they did not blame me for one single day, and they let me know this. So in turn, I have been trying to let go of that guilt and to not blame myself.

My family is teaching me to let go of my past and to live for the present. They accept me. I’ve always had a truly difficult time letting others see the real me, good and bad, and yet I understand now that is all my family has ever wanted. It is a wonderful feeling to have them support my art in whatever direction it goes. I love when they come into my art room and see what I have been working on.” 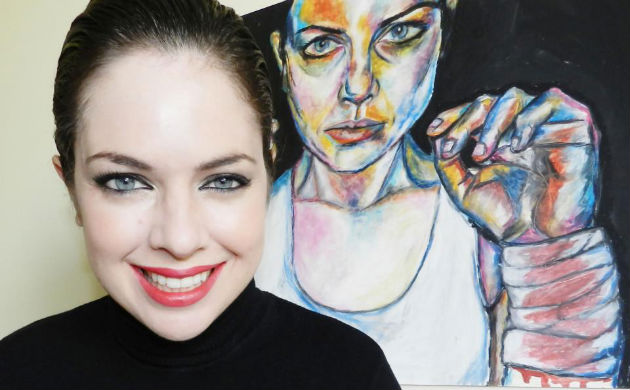 And what direction does Mansilla hope to take her work next?

April Mansilla: “I usually like to say few words about this. I like my secrecy when it comes to upcoming creations, but what I will tell you is it will involve a little red lipstick.” 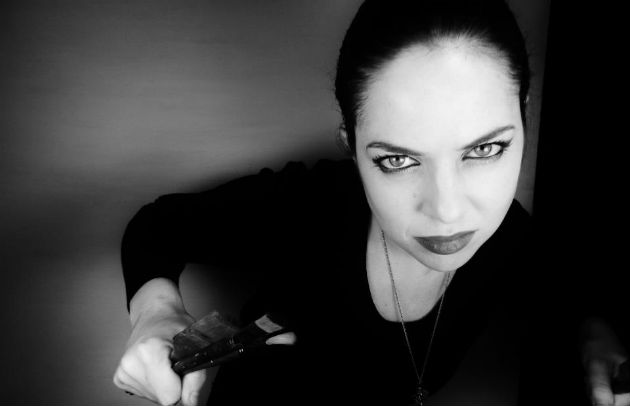 For more about the artist, please visit her website at: aprilmansilla.com