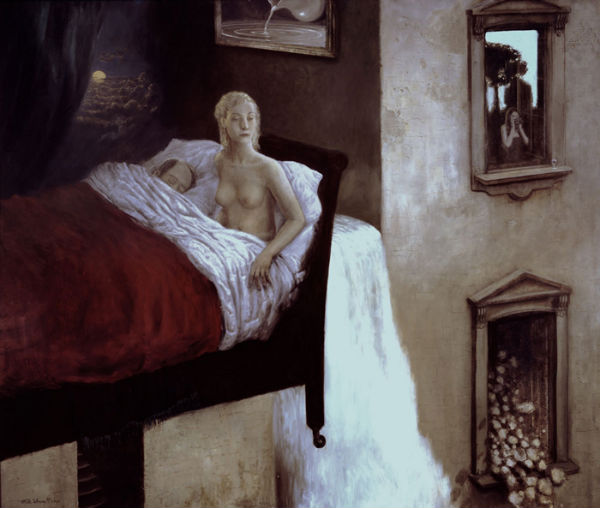 “You don’t drown by falling in the water; you drown by staying there.”
~ Edwin Louis Cole 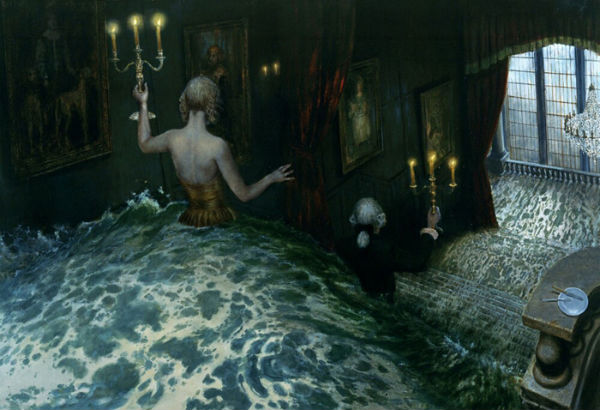 e recognize water as life source: in utero it cradles us and in birth we emerge from its safe embrace. Even as adults, water makes up for 60-90% of our cell weight, the pulsing life circulating through us metaphor for the cycle of life.

But water can just as easily destroy.

Laura Stanziola, an artist friend of mine in Santa Fe reminded me the other day that the presence of water in a dream or vision is often seen as metaphor for “deep emotion and significant change.”

Consider then the role water plays in the paintings of Mike Worrall. Encroaching on his solitary subjects in their elegant surroundings, bearing down upon them as they turn their trusting backs. Worrall puts his people in harm’s way again and again. 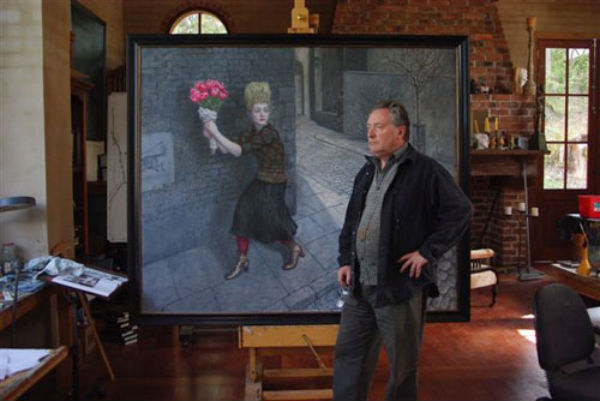 Australian surrealist painter Mike Worrall in front of his work, The Bouquet.

Deanna Phoenix Selene: What does the presence of water in so many of your works represent for you? Is it danger approaching? Are we all in essence lost at sea? Shipwrecked? Of do these waves offer us a chance at wiping the slate clean, as in the woman by the window here in The Trouble with Time who seems remarkably unconcerned as her companion is swept away by the waves? 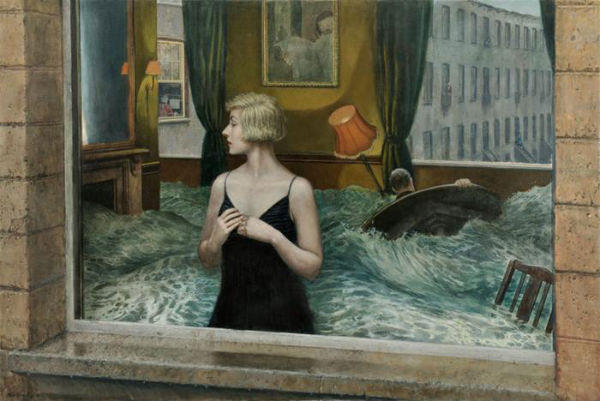 “In the world there is nothing more submissive and weak than water.
Yet for attacking that which is hard and strong, nothing can surpass it.”
~ Lao Tzu

Mike Worrall: When I do a figure on her own in a painting she can give the viewer her undivided attention. When there are more figures in the picture, the attention is divided somewhat. In answer to your question what does it mean in the above painting The Trouble with Time, I don’t like to divulge my reasoning behind any particular painting. Except to say, that there’s a mystery to be solved maybe. But the painting is not meant to be just about a mystery either. 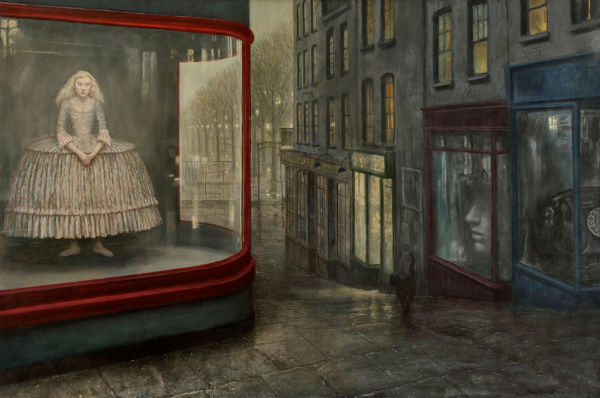 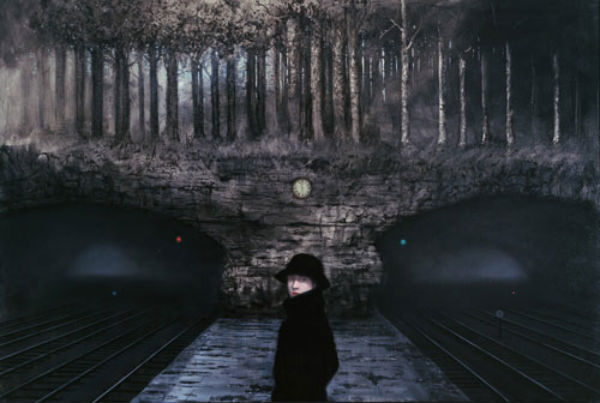 Deanna Phoenix Selene: Poets Corner I think is one my very favorite of yours, along with Appassionatta. We can feel the music here, as it translates to every muscle of her face and being. I’m guessing you listen to music as you paint? And do you yourself play an instrument? 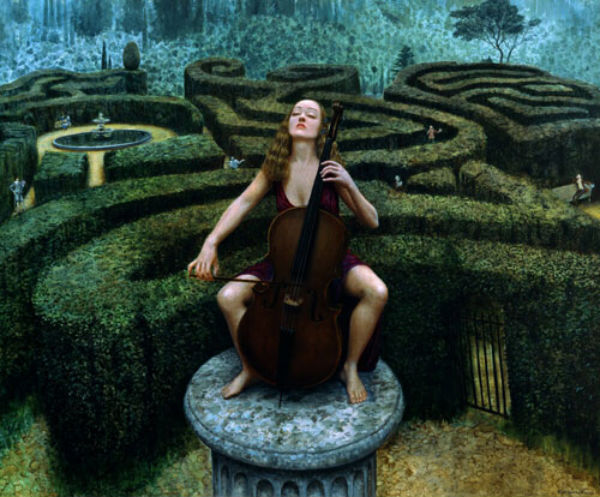 Mike Worrall: Yes I do often play music to help create the mood. I want it to come through in my work and have done so for many years, although more recently I have found myself playing less and less as if I didn’t need it so much now. When I was younger, I wished I had the ability to play and compose music; but alas, my attempts at it were a bit weak, and doomed to failure, so instead, I thought how good it would be if my paintings could convey the same mood as my favorite pieces of music. 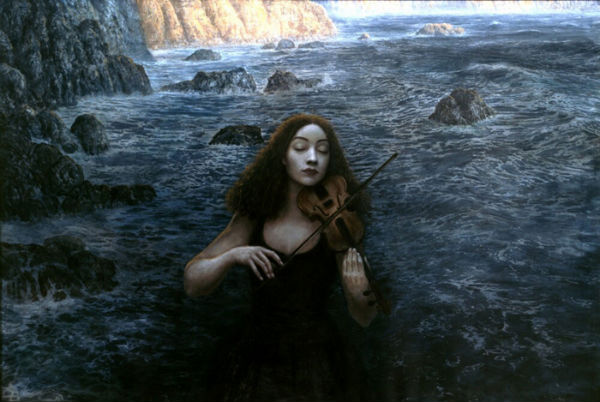 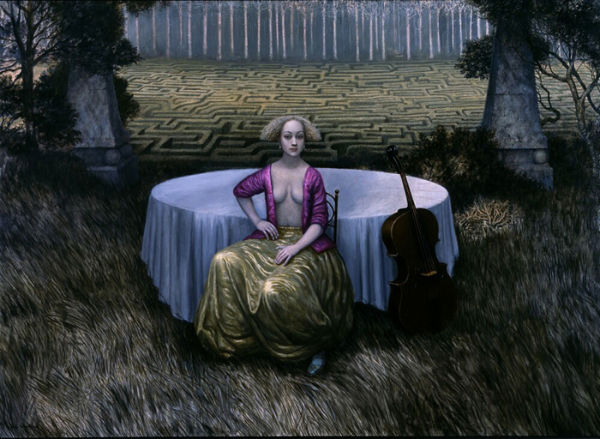 Deanna Phoenix Selene: There is such a delicious sense of drama in your work ~ as if one is viewing a play, a farce. Do you have a background in the theater arts? 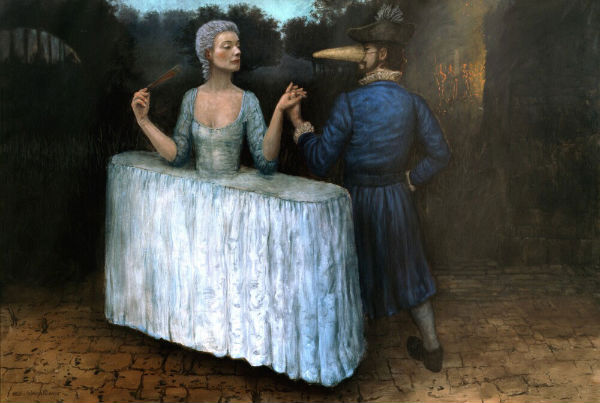 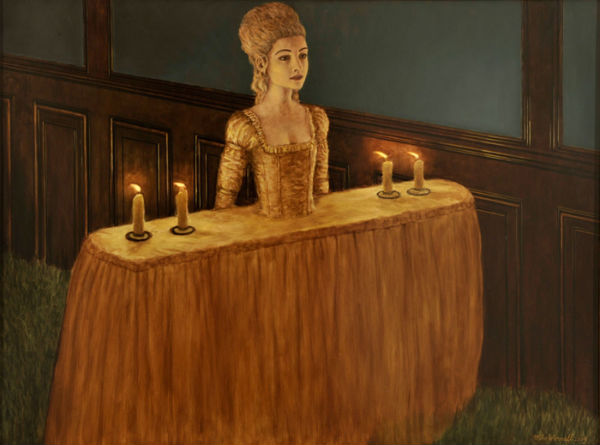 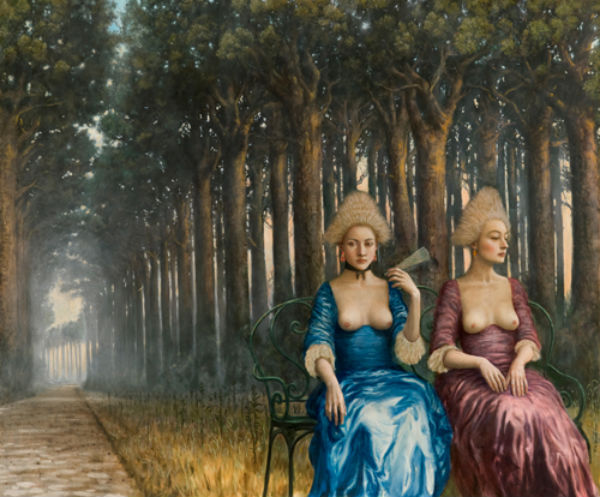 Mike Worrall: Thanks for expressing it that way. I do feel there is a little of the stage and pantomime, as I do like to create a stage effect where the background is often like a scenic backdrop. I do have a Feature Film background as a conceptual artist, starting from casual involvement in the early 1970’s, on to full-time work by the 1980’s. My last involvement in a feature film would have been in 1997. It could also be the influence of artists from history whom I very much admire, where often the group or scene is set up like a stage set. 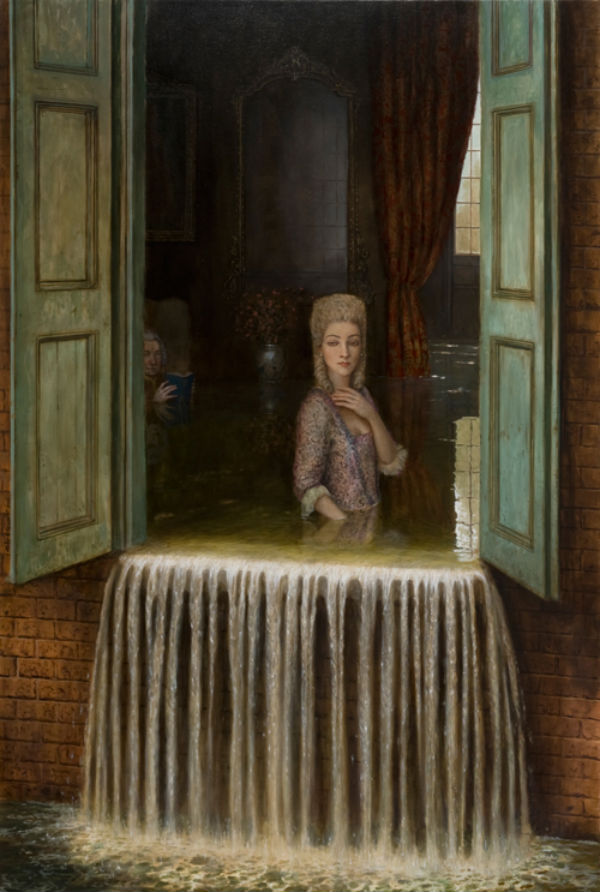 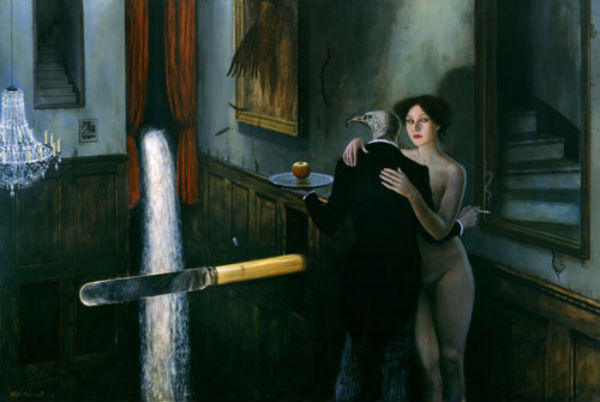 Deanna Phoenix Selene: When I shared your work with a photographer friend of mine in Nova Scotia, Daniel Heikalo, he immediately noticed similarities with the work of Belgian surrealist, Paul Delvaux. The dream connection as well as the water. Was Delvaux a strong influence for you? 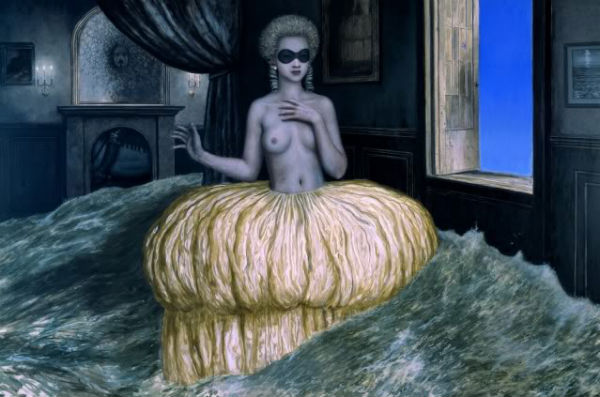 “To have faith is to trust yourself to the water. When you swim you don’t grab hold of the water,
because if you do you will sink and drown. Instead you relax, and float.”
~ Alan Watts

Mike Worrall: Yes I discovered him [Delvaux] in the 1960’s, and although he definitely registered with me at the time, I wasn’t too keen on him back then. It wasn’t until about twenty years later that I really got off on his paintings. Amongst other artists that immediately come to mind as my big influences over the years are Van Dyke, Lely, Degas, Sergeant, Max Ernst, Magritte, Dali, and Tooke. 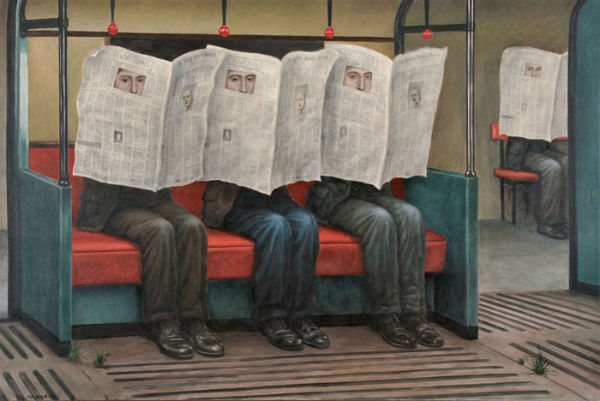 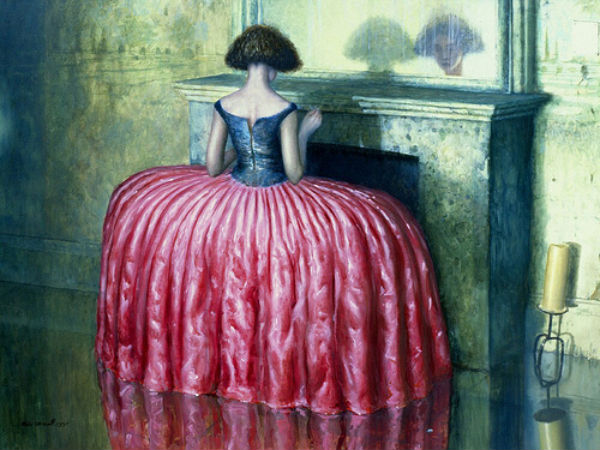 Deanna Phoenix Selene: Dreams for some people remain a very elusive part of their lives. Many I know wish they could better remember their dreams but can’t. Are you any different? Are your dreams ever a source of inspiration for your work? 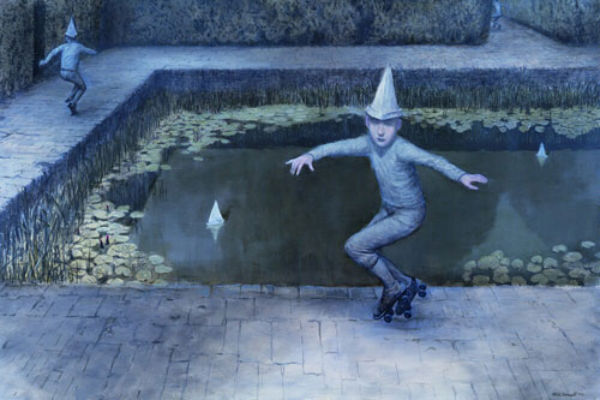 Mike Worrall: Actually, I very rarely can remember my dreams enough to think of them as source for inspiration, I think I use them for guidelines sometimes but not accurately so. And let’s face it: most dreams we have are not necessarily going to make very good paintings, being either too difficult to translate or not very interesting to anybody but the owner of the dream. 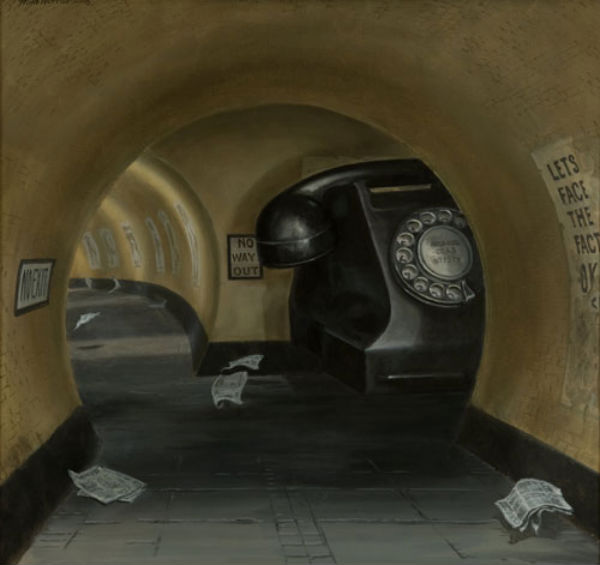 Deanna Phoenix Selene: For a new painter just starting out, what would you say is the most important quality to possess? Do you believe some are born with innate talent? Or do you feel artistry is more a result of sweat and hard work? 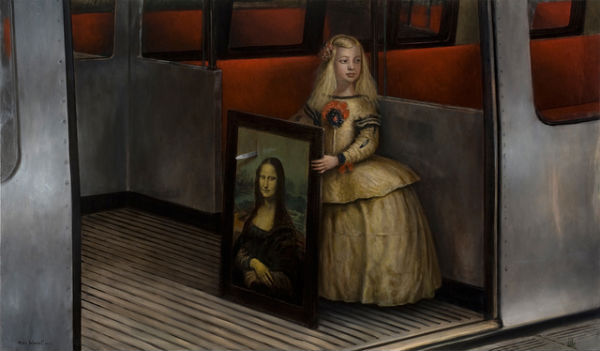 Mike Worrall: Well, I would say it certainly is of huge advantage to have an innate talent. Speaking personally, I doubt whether I would have been as interested in drawing or painting if I was not fairly successful at it to some degree. As a child, I remember getting praised for my efforts and being encouraged to draw. So it was only logical for me to carry on drawing and thinking this was what I was going to do when I grew up, although I also wanted to be other things like a frogman/deep-sea diver, or be in the navy and design cars. But of course as the old adage goes “You can have all the talent in the world, but you must use it.” So it’s also good to have enthusiasm and determination and vision. Having said that, I remember a friend of mine way back in the 1960’s wanting so much to draw and paint, but that unfortunately he didn’t have much of a natural talent for it. Nevertheless, he was so determined to study at the Royal Academy in London, that through great diligence and hard work he actually trained himself to be proficient enough at drawing to win a scholarship at the RA. I was amazed how he managed to achieve his ambition. 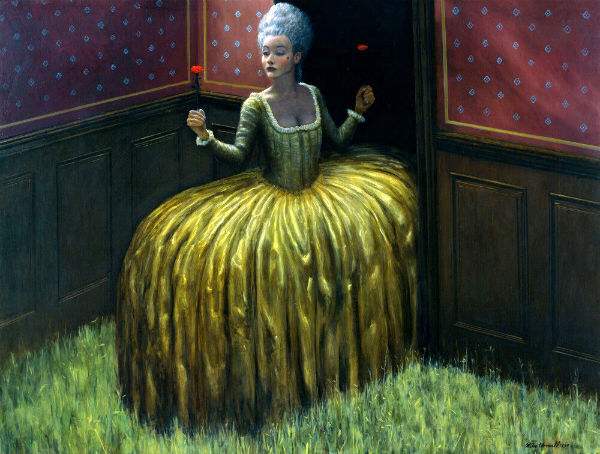 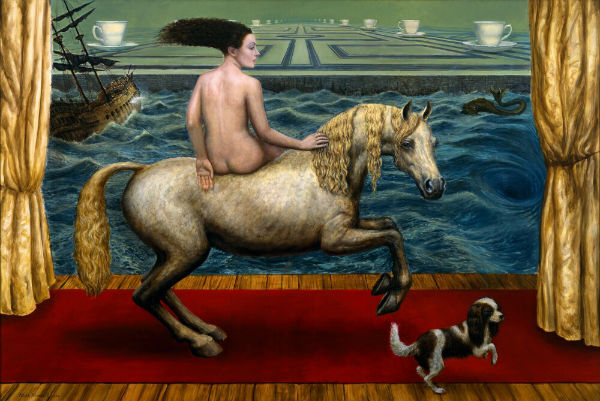 Mike Worrall: I suppose I would have to say that having spent 50-odd years having to think up ideas for paintings, and working in advertising and feature films is how I work, live and breathe. I have early memories when this was not so, when I knew I wanted to be an artist but thought I lacked one important thing: imagination. I had difficulty thinking up ideas because I was under the impression that all artists had regular flashes of natural inspiration. Mine were so few and far between that I thought there was something wrong with me. It was a quite a handicap. I suffered this view of myself for a number of years, so I worked hard to think up ideas, all-the-while not realizing that this process was quite normal and most artists do have to work at it quite a lot, as I still do all these years later. You can wait a long time for an inspiration to arrive. They do come sometimes in a flash out of nowhere but this is rare. My advice is to do as much drawing and the ideas come in the form of doodles and thumbnail sketches. This is how I work anyway. 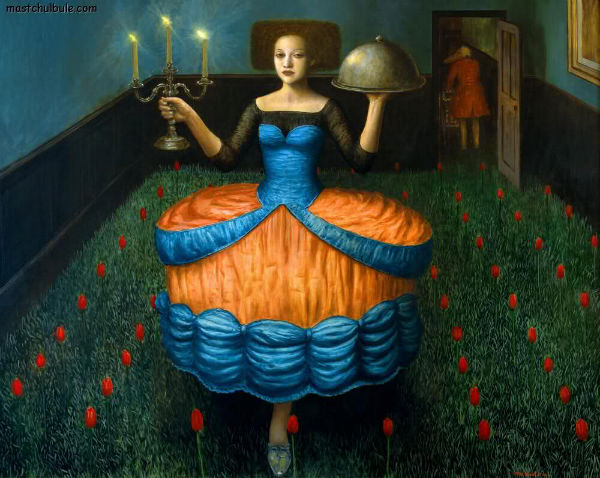 Deanna Phoenix Selene: Where would you like to take your work next? Are there specific themes calling to be explored? 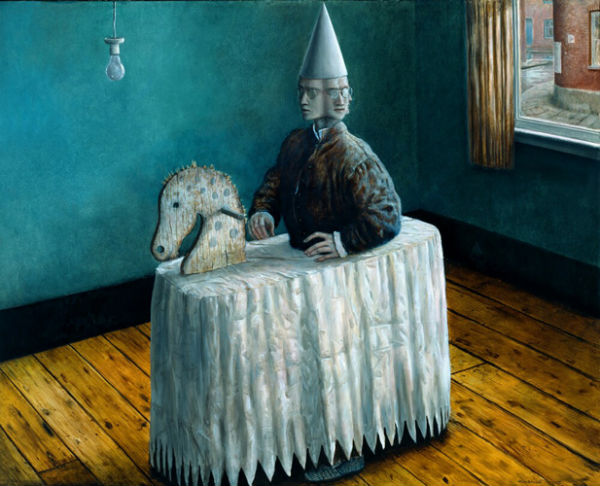 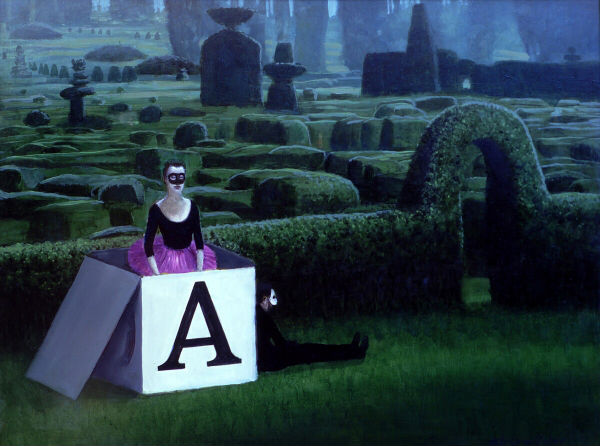 Mike Worrall: I enjoy exploring why we are here, but my primary objective is just to paint beautiful works that make people think and wonder about what they mean. That’s why I’m drawn to surreal subject matter in a realist way. I shy away from shock tactics, preferring subtlety, which I feel has a longer lasting appeal. I have yet to do my best painting if such a possibility exists ~ or maybe I have already done it, I don’t know! I’m reasonably happy with my work practice although I still suffer from self-doubt and always will. Occasionally, I get very depressed about myself and my work but I know when I get low that my spirits will eventually rise again and I just have to work through it ~ which often means scribbling away and doodling. This really helps. I have a solo show every two years, and having this as a target or deadline is very helpful for a creative mind. It certainly helps stop the procrastination which I accept is common to most of us at times. 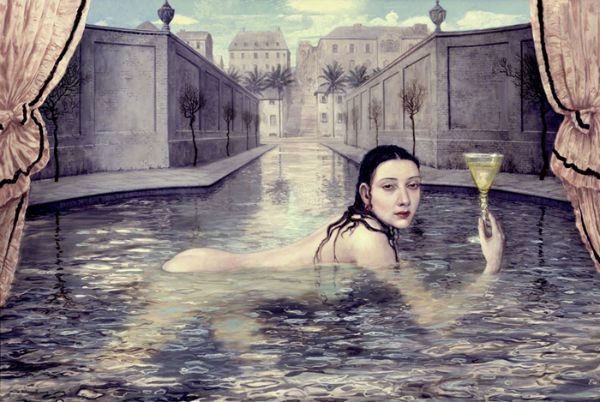